Readers' best harvest photos and the stories behind them have been collated.

Queensland Country Life put the call out on social media for readers' best harvest photos and they certainly delivered.

From headers and chaser bins captured by drone at golden hour and augers filling trucks with precious grain, to b-doubles illuminating crop stubble in the dark and a couple of blokes watching harvest roll on, readers were keen to show off their patch of the state. 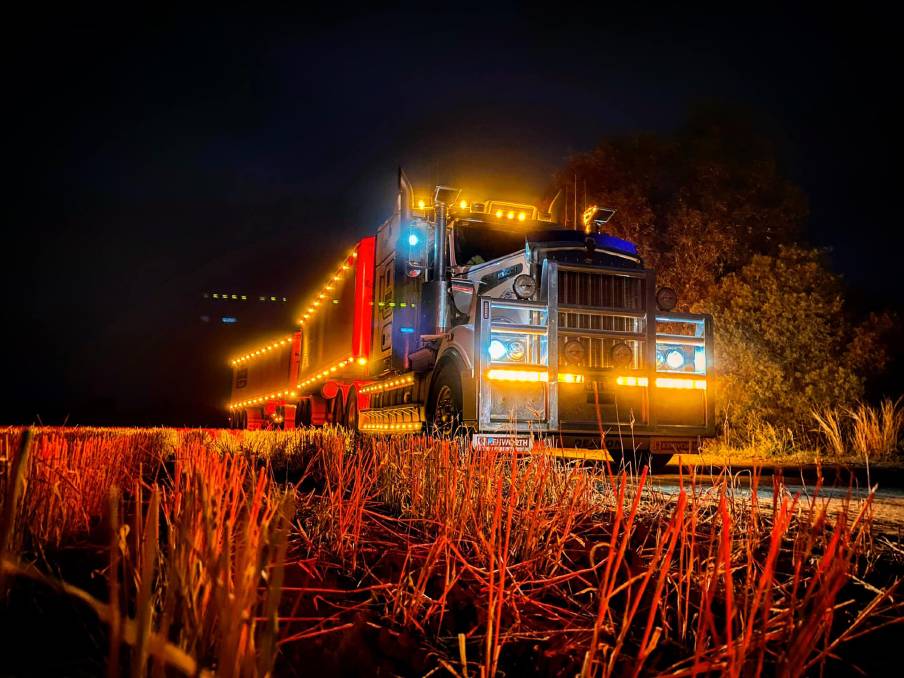 The harvest began in the Central Highlands in September before moving south to Maranoa, Balonne, Western Downs, South West and Darling Downs.

A mixed bag at Moonie and Kumbia

Dalby's Hayley Wolski and Jarrod Hancock have been in the Moonie district on the Western Downs baling hay and carting grain since the first week of August.

Mr Hancock, who covers Southern Queensland with family business Hancock Hay and Haulage, said he was seeing above average yields at some farms, but overall it was a patchy season.

"Yields this year have been above average. Everything around this district is averaging around three to five tonnes to the hectare," Mr Hancock said.

"But you haven't got to go far and there's patches that are averaging one to two tonnes a hectare, so it's still been a patchy season.

"The southwest had a lot of rain early on and the dry finish hit the wall on it a bit. Quality is up and down too - a very mixed bag this year. I did a job a few days ago and they were getting some APH1, APH2 and feed wheat.

"But it's definitely better than the last couple of years. No one's really complaining too much out here."

The harvest has not been as positive at Kumbia where his parents and brother grow sorghum, cereal and hay crops.

"It's been pretty ordinary over that side of the range. We got a lot of rain early on and had nothing to finish," he said.

The family planted 120ha of oats and barley for fodder, which averaged about 10 bales/ha. In the Goondiwindi Region, Meghan Atkinson at Toobeah, said it had been a great season for many.

"It has been a great season widespread for our region," Ms Atkinson said.

"It is great to see everyone with crops in and getting good yields, and great to see the trucks lined up at GrainCorp once again.

"A good year has been a long time coming."

Ms Atkinson captured her fiance Hayden Palmer harvesting the winter crop at Adam and Jordy Campbell's Toobeah property Strathoban. She said their barley and wheat were sown in April and May, with harvest starting in late-September.

'Nice and green' at Leyburn The barley crop had some emergence issues but the sheep still had a successful first grazing in April and a second grazing in October.

"We've only been out here about four years, so we're still doing soil preparation for crops," Ms Harman said.

"We're mainly focused on Black Dorpers and they're just powering on - we've got 100 lambs this year.

"It's been a good year for us with the rain and we've had a lot of twins drop - we even had our first set of triplets this year.

"It's nice and green. We've got feed on the ground, so we didn't need fodder."

"John lets me know when he's harvesting and I race over there to get some photos. I love his farm."

Mr Tate planted wheat and chickpeas and is getting ready to sow sorghum.