Wingamin White Suffolk Stud Ewe sale was well supported with all 101 ewes offered sold to a top of $7000 and $1937 average. 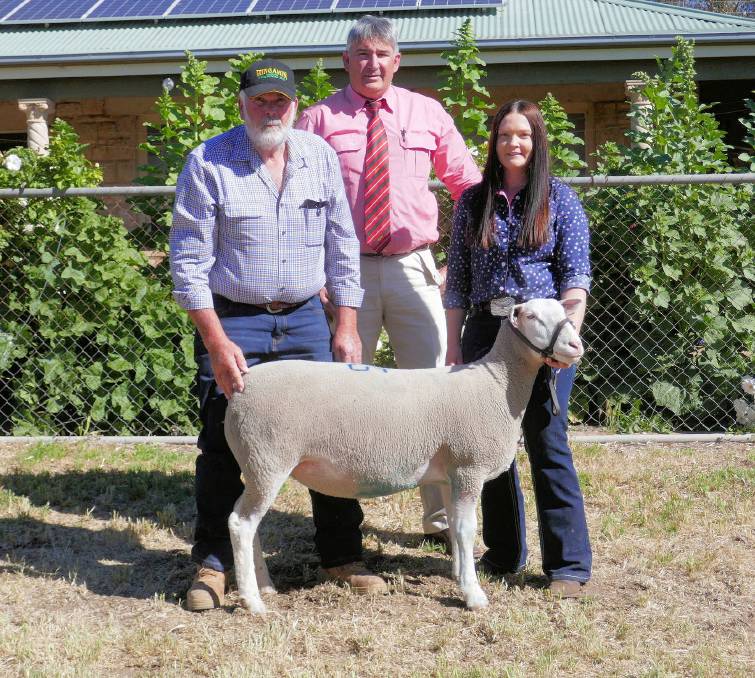 Wingamin White Suffolk stud ewe sale set a new White Suffolk national ewe record not once but twice at the on-property event at Karoonda on Monday.

The sale integrated with AuctionsPlus had 619 online bids across 97 of the 101 lots.

"She had fabulous figures to compliment her phenotype," she said.

"We were both surprised and stoked to be so well supported by some of the breed's leading, highly respected studs.

"We have been on Detpa Grove bloodlines for many years so David knows the lineage of the ewes he purchased really well.

"The style of sheep we breed and the balance of figures all contributed to those lots being highly sought after.

"To break the SA record with the $32,000 ram a month ago was just amazing and now to break the national record for a White Suffolk ewe - twice - is the pinnacle of stud breeding really.

"It was exciting to be able to offer such a lovely line of ewes and be rewarded for it and also sad to part with some of them so it is somewhat bittersweet."

Elders southern livestock manager and auctioneer Laryn Gogel said it was a successful sale with a line-up "second to none" and quite exceptional as expected.

"The quality of the young ewes was outstanding, impeccably bred and beautifully presented," he said.

"We broke the record twice but the focal point was the prices just continued to come and come right through the sale.

"Both ewes Depta Grove secured, were outstanding young ewes for quality and type with strong genetics and data featuring well on growth and TCP.

"They got generally all-round package sheep."

Mr Gogel said Wingamin managed their ewes particularly well to have the ewes looking well for sale day, without being over done.

"The pedigrees and data reflected they were going to be good but they were also very very good on the eye," he said.

"The competition was grand on the better ewes and it was a very exciting sale.

"We were very fortunate that AuctionsPlus provided the marketing platform that gave us the opportunity to get the ewes over the border."

Mr Gogel said it was only stage one of the production reduction with another sale planned in 12-months time when the ewe lambs are ready.

"It will be very exciting going forward and ultimately there is some big big opportunities for people to secure very good Wingamin genetics in the future," he said.