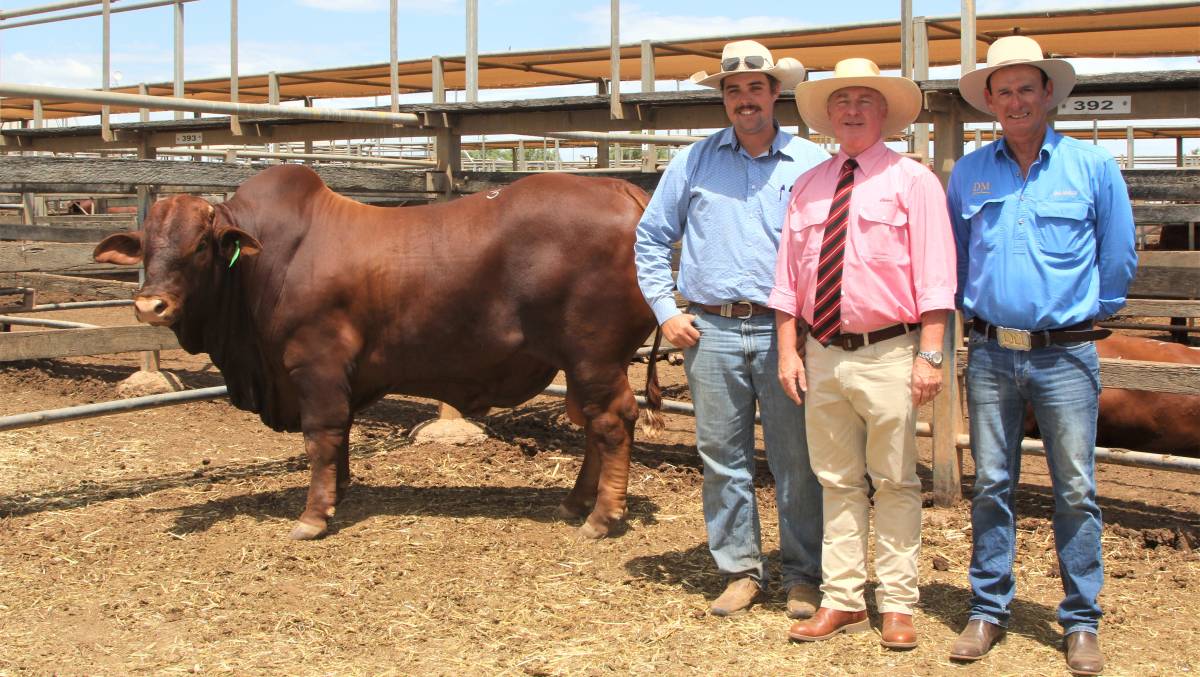 His vital statistics included a 40cm scrotal circumference, an eye muscle area of 133 square centimetres, and intra-muscular fat of 4.6pc, with a weight of 910kg.

Dalmally Jeremy was sired by Yaralla Sheldon (H) and his buyer, Larry Farquhar said the fact that he was only heterozygous polled counted in his favour for them.

"We think the way it's going, we need to throw some horn genetics in," he said. "I also loved his bone and power, and his sirey outlook."

It's the first Dalmally bull he's bought, saying he had heard lots of good things about the stud.

Mr Brown described the bull as a terrific beef bull, saying he'd been very pleased with the progeny of his Yaralla sire so far.

"This was a good solid sale for us," he said.

Continuing the trend of studs outlaying the highest prices at the sale, Dalmally paid the equal second-top price, $22,000 for Karragarra Rockstar (P).

Mr Brown said he liked his bloodline and sire, Oasis A White Gold (P), plus his high content.

Another of the York Cattle Co's bulls, Karragarra Riverbed (P) also brought $22,000 when he was snapped up by the Rutherford family's Redskin Droughtmasters, Redbank, Morinish.

That bull was also sired by Oasis A White Gold (P), and was one of nine sold for the Karragarra prefix for an average of $10,444.

Also towards the back of the catalogue, Wallumbilla's Roger and Jenny Underwood received $22,000 for Wallace Vale Jonah (P), purchased by Derek, Lara and Thomas Mays, Tomawill, Boonah for stud duties. 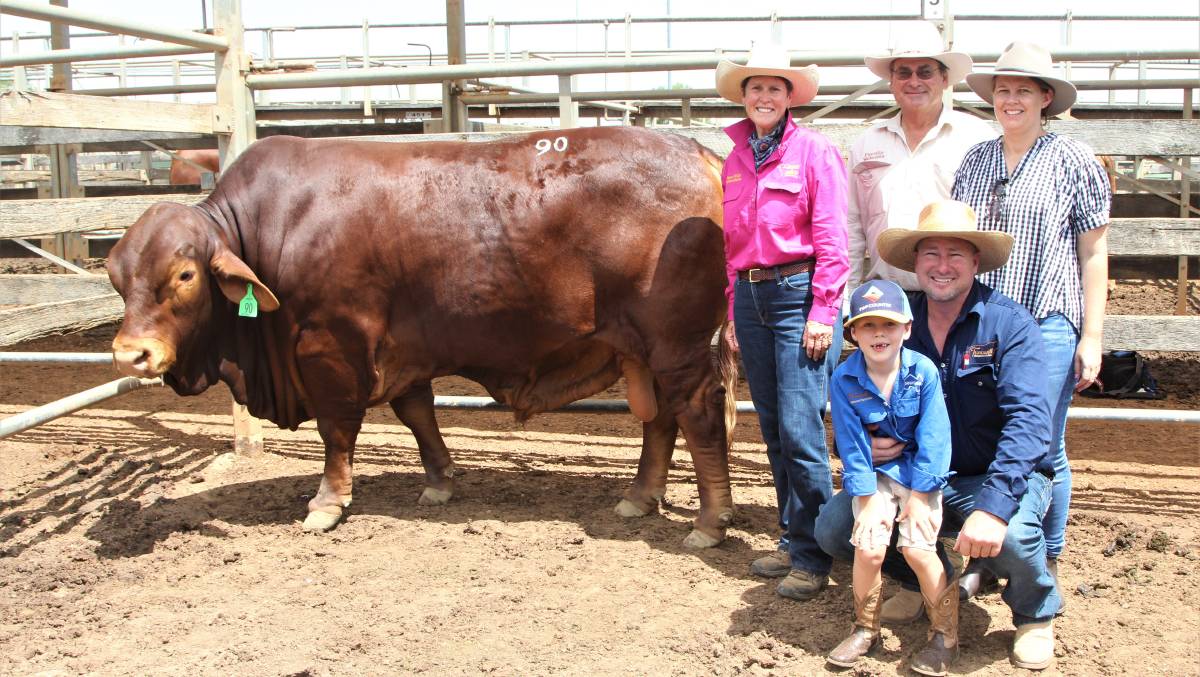 Jonah, a homozygous polled bull, is the son of Glen Fosslyn Jigsaw (P) and Wallace Vale Dimples and weighed in at 900kg.

The Mays are previous visitors to the Underwoods and tried to buy the bull out of the paddock last year.

His quiet temperament was a big selling point for them, with six-year-old Thomas working with his father in the yards.

The Underwoods bought one of their bulls, Tomawill Eastwood at the Coolabunia sale this year.

Sevenell and Lynsey Park sold seven bulls between them for a very respectable $14,142 average.

Inga Hayes and Lindsay and Lyn Philp, Sevenell and Lynsey Park studs, Bell, were delighted with the results of their sale on Friday.

Speaking on behalf of the studs, Inga Hayes said that as well as being their highest average, the four bulls sold for $16,000, one for $15,000 and two for $10,000, had given them their best price and most consistent sale ever.

All of the bulls offered were sired by Vale View M Diesel (P) and Ms Hayes said they were very happy to see them go to good homes.

Three of the bulls were secured by Doce P/L, The Bend, Roma.

Volume buyers included Golden Grazing P/L at Yuleba, who bought eight bulls for an average $7500, and Reynella Grazing Co at Charleville who finished the sale with eight bulls for $10,625.

"It's always hard when you're coming to the end of a season and orders are filled - a month earlier and prices may have been different," he said. "It was good to see some good bulk buyers still actively in the market."

Only two bulls were sold through the online Elite Livestock Marketing platform, despite plenty of viewers, and 57 bid cards were filled in on the day. 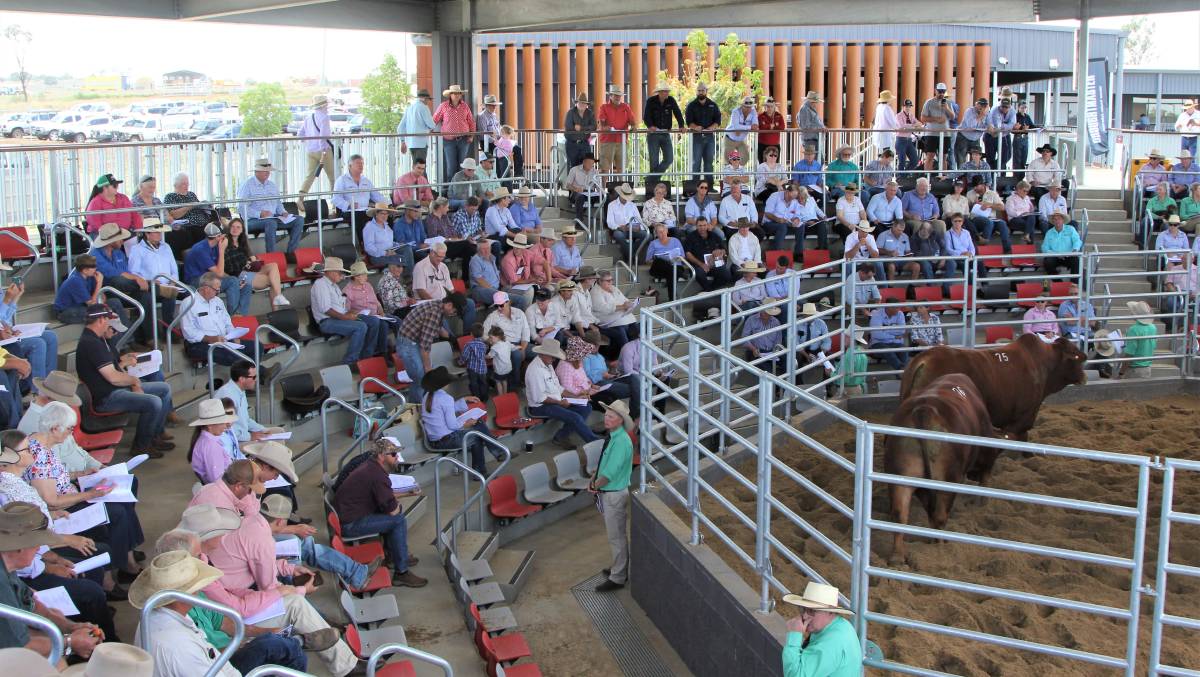 The crowd at the sale was the largest the sale has seen in its 25 years, according to long-time attendees.