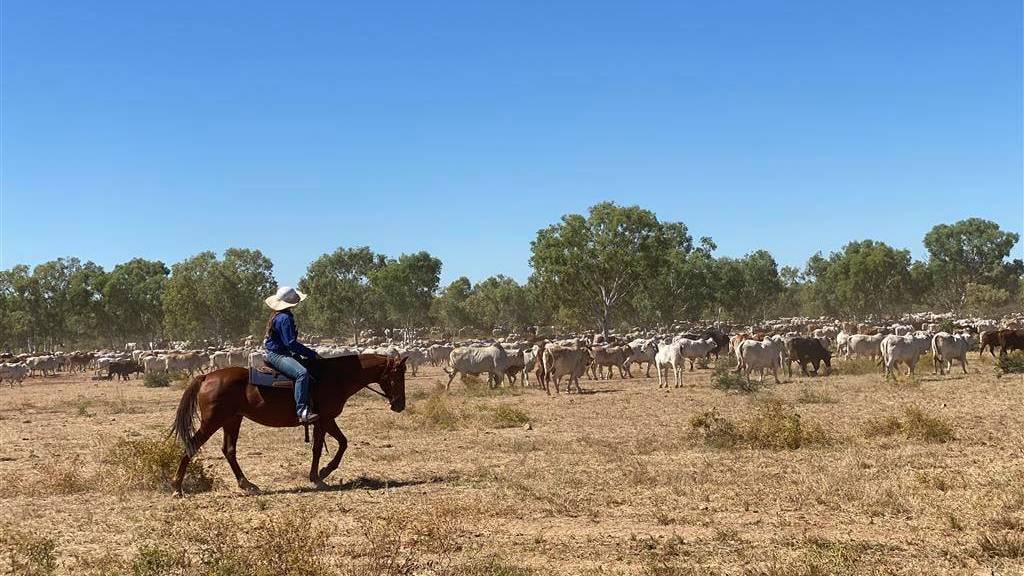 Calf losses and bite damage to hides was costing Mt Sanford around $252,000 each year.

"The calves killed due to wild dogs are on top of those numbers - we don't see them as they are out bush but we do at times witness a pack of wild dogs pulling calves down so we know when it happens," Mr Watts said.

The estimated direct cost in control and calf losses across all the Heytesbury properties including WA is around $1.5 million a year.

Mr Watts said there had been a spike of bite marks and calf loss in the first round of this year's weaning on Mt Sanford.

He said any calves with bite damage to the hide were unsaleable for live export and eventually slaughtered for use as wild dog bait.

"If they have a tail or more than half an ear missing, they are very hard to sell," he said.

"We get around 150 dog bitten calves or weaners coming through the yards each year resulting in quite a cost as a feeder weight export animal is worth $4/kg or $1400."

Mt Sanford has controlled 65 wild dogs so far this year, recorded 33 sightings and more than 100 signs of tracks and/or howling.

"At Mt Sanford alone we have had 88 calves through in this year's first round of mustering with dog bites and two dead calves. This does not include animals we don't see killed in the paddock," Mr Watts said.

"Usually part of a boreman's role is to carry out on-ground shooting and trapping, and we do two rounds of wet and dry baits.

"We have an annual allocation of 6000 wet baits under our permit and put roughly half of that out (3000 baits) twice a year, in autumn and spring.

"The baiting is highly targeted but this still only equates to roughly one bait per 100ha during each program, so it's important to know the baits are going into the right areas.

"About half of the wet baits are distributed by air as much of the country is inaccessible to motor vehicles.

"We also have a dry/manufactured bait allocation of a several hundred baits that we use for mopping up, or if we see tracks we will put dry baits out in the hope of picking up those wild dogs."

Mr Watts said there was no evidence of 1080 baits affecting non-target species on Mt Sanford.

"The baiting is carried out across all the Heytesbury stations in the same week in May or June and again in September-October, and we also work in with the neighbours.

"Some of these properties have national parks on their boundary and have to deal with the constant dispersal and incursions of wild dogs from those uncontrolled areas onto their places.

"We have been struggling as the NT Government wants to reduce our 1080 bait numbers, and this will have a huge impact on wild dog numbers - we are not quite keeping up with them now."

Since the Katherine workshop in March, FeralScan has been introduced across all the Heytesbury stations to track baiting effectiveness and calf loss.

"My boreman doesn't carry a firearm - he uses FeralScan as a weapon against wild dogs," Mr Watts said.

"During the first round baiting this year, we knew where to target our baiting as there was definitely hot spots on the property highlighted by the FeralScan maps of sightings and tracks.

"We could see how effective our baiting was - sightings were almost halved after first round baiting.

"When my boreman comes back into Wi-Fi signal he uploads photos of sightings or dog tracks onto FeralScan, enabling me to see exactly where any traps need to be located.

"We are also receiving real time information on the location of wild dogs on the other stations allowing us to better target our baiting campaigns."

Mr Watts said Mt Sanford was keen to participate in a research trial to track the movements of wild dogs at a landscape scale and to investigate the interactions and impact on cattle.

The project is being developed by Greg Mifsud and the Centre for Invasive Species Solutions and is seeking funding from Meat and Livestock Australia's Northern Breeding Business Program to improve calf survival across northern Australia.

"We have come off the back of a few years of drought and there has been food source concentrated at water holes making hunting easier, followed by a good wet season this year which has allowed the wild dogs to breed up."