From the first bid to the final hammer, willing buyers from Biloela to Cloncurry and Alice Springs were raising their fingers to secure genetics from the Walker family's 21st on-property sale.

His muscle scans included P8 and rib measurements of 12mm and 9mm, an eye muscle area of 143 square centimetres, and intramuscular fat of 4.8 per cent, while his scrotal size was 39cm and semen morphology was 59pc.

Stud principal Ian Walker said the bull had been one of his picks, and had looked good ever since he was a weaner.

"He has a lovely confirmation - he'll really go ahead when the Pearsons get him home," he said.

Mr Walker said it was also their best line of bulls.

"I think being big enough to put up a big line is a real help - there's no tail," he said.

His representative, Ray White Livestock's Paton Fitzsimons said poll genetics were important for the Murphys, as well as a dark cherry red colour.

"The most important thing is that they love their feet, they can get around, and they're not over-prepared," he said.

The Murphys also bought two bulls for $26,000 each, which Mr Fitzsimons said would go into a niche paddock of 100pc poll Santa Gertrudis cows.

They had purchased from Strathmore before, when they sold as part of the Cumberland sale, but Mr Joyce said it was their first time around the sale ring and its spectacular view of the Moonbong Range. 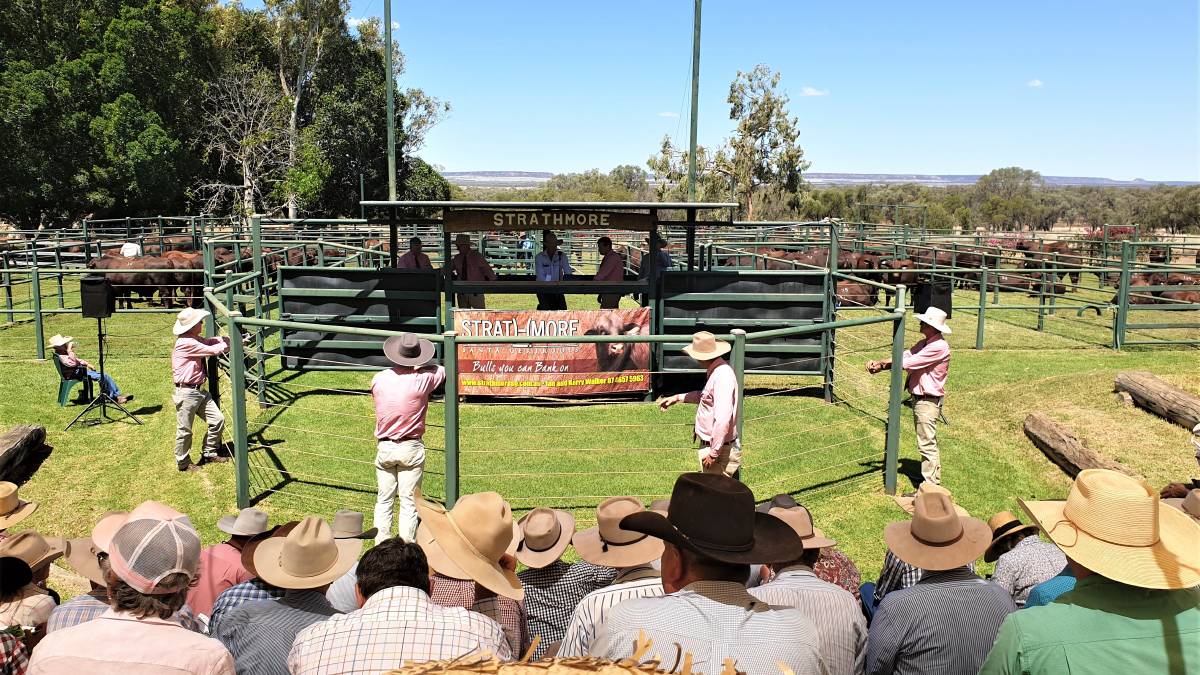 "We were looking for four bulls and ended up buying five," he said.

"We haven't brought in new genetics for a while and felt, if we were going to buy, we wanted to buy from a big herd and an established stud.

"We were looking for bulls that had good figures to produce good-sized weaner, as our forest block doesn't lend itself to fattening.

"We thought the bulls here were in strong condition, and weren't overfed." The Paraway Pastoral Co was another new buyer and made its presence felt as the volume buyer with 23 purchases.

Representative Cheyne Williams said he had come down from Cloncurry to inspect the bulls and liked what he saw, especially the bulls' shape, evenness and temperament.

The company is using Santa Gertrudis bulls over Brangus heifers and will be using the new sire prospects at Clonagh Station.

Another volume buyer was the Sandover Pastoral Co, based at Amaroo Station, Alice Springs, but also with Mt Calder and South Terrick at Blackall.

The eight Strathmore bulls they purchased will be going back to Hamilton Downs at Alice Springs.

Company representative Stewart Weir said they were good bulls for their part of the world, where 85pc of their heavy cattle are shipped to Vietnam.

"We look for the dark red colour, plenty of hump, and bulls that keep the shine on," he said. "We only buy poll genetics now - horn is a big issue because we don't brand anymore, we just wean."