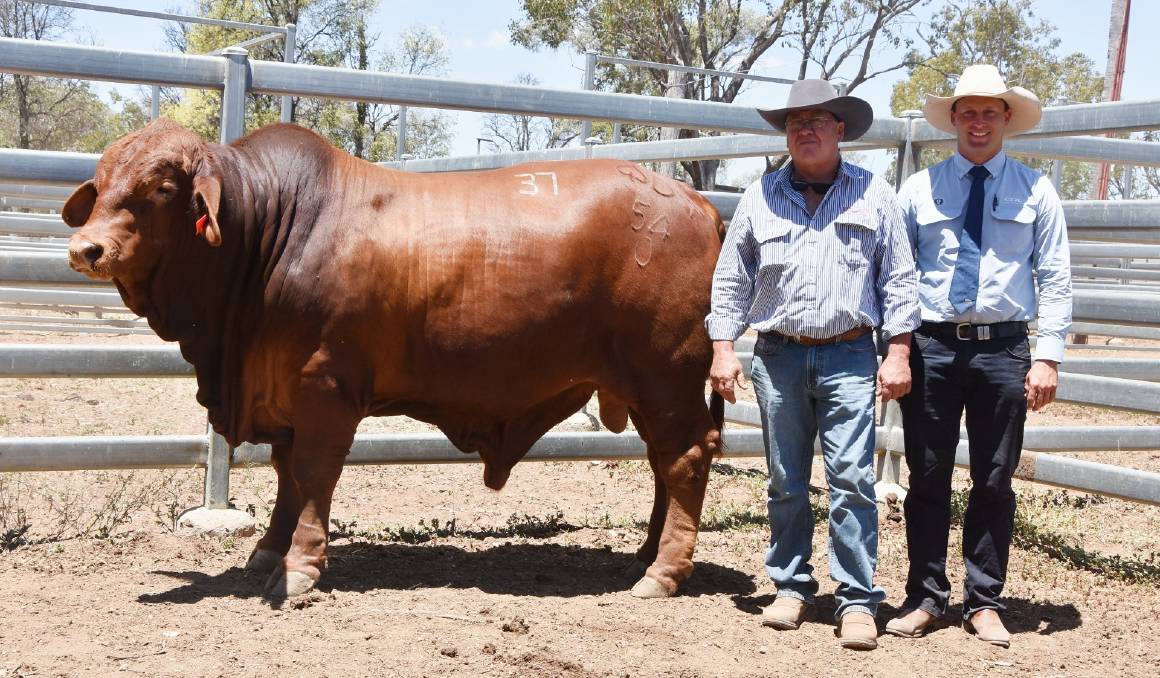 The 7th annual Bullzeye Droughtmaster Sale was a buyers' market in Capella on Friday, reaching a top of $24,000.

An increased number of commercial buyers registered their attendance at the seventh annual BullZeye sale in Capella on Friday, with Droughtmaster bulls reaching a top of $24,000.

Eight central Queensland-based vendors presented a top quality draft of Droughtmaster bulls, with 61 out of 73 sold for an 84 per cent clearance, to average $10,311 - $1,370 more on last year's result.

This year's draft of bulls saw an average age of 22.2-months-old, a weight of 782 kilograms and an eye muscle area of 131 square centimetres. 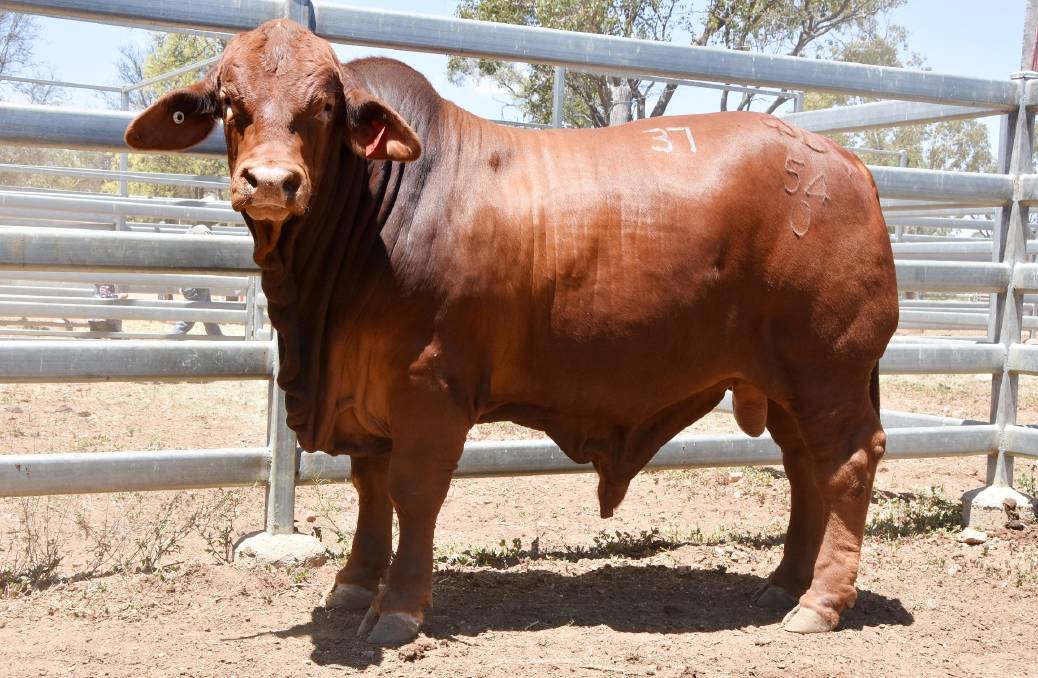 SIRE APPEAL: Hamadra Kobba (P) had the growth figures and the visual conformation to back him in the ring on the day.

By Vale View Arizona 2 (P) and out of Hamadra Interlude (P), the 20-month-old was knocked down to Ross and Luke Parkinson and family at Mount Lowe, Capella.

Co-stud principal Drew McKenzie said the family were "very happy" with the sale result, and that the top bull was the top of the draft for them going into the sale.

Tipping the scales at 888 kilograms, the sire prospect measured 41 centimetres in scrotal circumference and tested 90 per cent for sperm motility.

Scanning 136 square centimetres for eye muscle area, he had P8 and rib fat depths of 14mm and 8mm respectively, and an intramuscular fat percentage of 5.4.

Second-top honours on the day went to the Carrington family of Rondel Droughtmasters, Winton, with Rondel Black Jack (PP) selling for $21,000.

Purchased by Riverside Pastoral, Nebo, the 862kg sire prospect measured 41cm in scrotal circumference and scanned 127sq cm for EMA, 13mm at the P8, 9mm at the rib, and 5.7pc for IMF.

Bulls remained affordable across the board, with commercial buyers taking advantage of the diverse bloodlines and large quantity of bulls on offer.

Morganbury Pastoral, Charters Towers, were the top buyers on the day, purchasing six bulls for an average of $8500.

The Cragg family of Mourindilla and Fairview, Dingo, purchased four bulls for an average of $6250.

GDL selling agent Josh Heck said the sale average was a testament to the quality of bulls on offer.

"We received a lot of support from the commercial buyers this year, with bulls staying local in Capella and Clermont and as far as Springsure, Nebo, Charters Towers, Rocky, and Gympie.

"The high end bulls, again like every stud market, have been very strong, with a portion of these bulls selling for around $10,000 to under $25,000.

Peter and Deleece Carrington and family, Rondel Droughtmasters, Winton, sold 11 bulls with a top of $21,000 for a strong average of $13,363.

Will and Ingrid Haviland, Sugarland Droughtmasters, Capella, sold six bulls for a top of $14,000 to average $7000.

Paul and Paula Russell of Locarno Droughtmasters, Dingo, sold four bulls on the day for a top of $14,000 and an average of $9000.

Brenten and Hamilton Donaldson and family, Medway Droughtmasters, Capella, sold eight bulls to top at $18,000 with a solid average of $10,125.