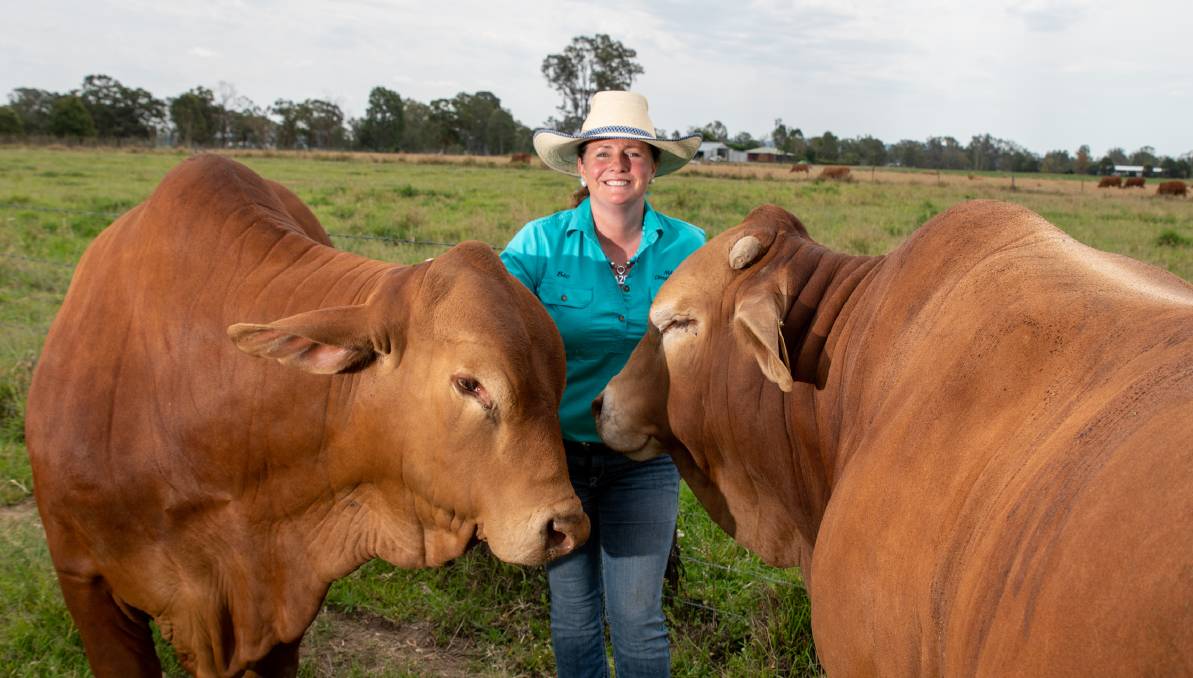 Ever since she was a little girl, Bec Brooks dreamed of owning her own cattle property.

Her love affair with cows began at her grandparents' property at Bracknall near Launceston, Tasmania.

Bec's father left when she was 11-months-old, so her mother took her and her sisters to live at the farm.

"My grandad Lyndsay had Aberdeen Angus when I was growing up and I loved his farm," Bec said.

"Going in the hay trailer, feeding the animals, playing with the cattle... mum would find me next door at the horse farm underneath the Andalusian horse scratching its belly. That's where the love of cattle came from. That's all I wanted - cows."

Linking up with likeminded people

Bec made the move to UQ Gatton in the early 1990s to study animal husbandry for two years before finding other people to become affiliated with - mainly Poll Hereford breeders.

One of her first jobs was with Barbara Roberts-Thomson at Academy Herefords in Armidale. "She taught me a lot of what I know. She's an amazing lady," Bec said.

But being a homebody drew her back to Queensland.

From there she met her husband, a builder named Matt, at a Kenmore church they both frequented in 1997.

"It was amazing because he was doing the same sort of things that I was doing - the junior judging, the junior handling and the showing of cattle," she said.

They were married two years later.

Bec and Matt saved up a deposit and bought their first house in Figtree Pocket in Brisbane. After 10 years of living there, Bec began to think about her dream again.

"We wanted land, space and peacefulness, but we had to save up a 30 per cent deposit to buy a farm," Bec said.

Finally, they sold their Brisbane house and moved to their 19-hectare farm at Wivenhoe Pocket at the base of Lake Wivenhoe in 2010.

When they settled in, they knew they couldn't afford stud cattle, so they started off with Boer goats.

"We had to have an animal that was a meat animal that we could also show, so we had 75 Boer goat breeders here," Bec said.

But with Matt working long hours in his new role as a building inspector, Bec didn't have enough time to tend to such a large tribe.

"The worst thing about goats is you have to trim their feet every three months and when you've got 75 of them and doing it by yourself, I got fed up with it and I thought, 'Maybe if I sell them I could buy a couple of cows' and Matthew said, 'Okay, let's do it'.

"So we had a dispersal and that went really well. We made more money than we thought we would and people came from everywhere." 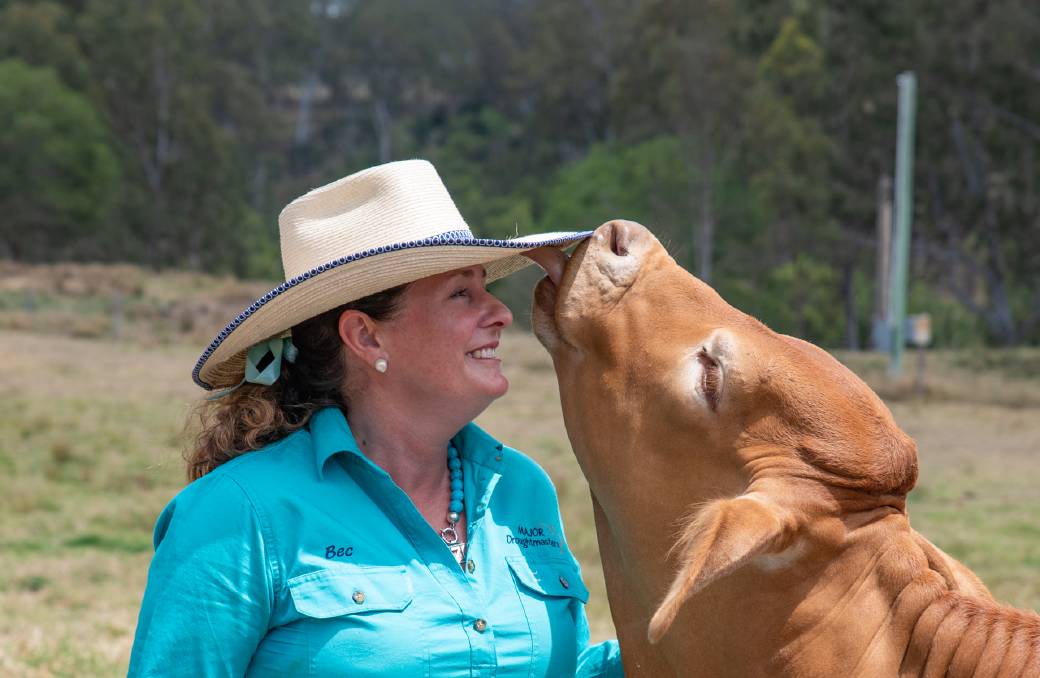 Beginnings of a herd

Bec and Matt sourced their first animals from the Cream of the Crop Female Sale at Coolabunia, and from there, Major Droughtmasters was born.

"We bought our first lot of girls there, then we went to the DN (Droughtmaster National) and we just kept going. We'd go to friends' sales and pick out girls from there. Before you know it, the farm's full," Bec said.

"We try to keep the animals sourced locally so they are used to this environment - there are ticks around here."

Bec has been selling some of the herd online, but admits it hasn't been easy.

"They're just beautiful animals - their skin, their beautiful smooth coat, their style, their presence, their meat quality, their soundness, their motherly instincts," she said.

"I thought we could sell off the progeny each year, but when you get attached to them and you give them a name once they're born, you form a bond. They're like my babies. It's been very hard to sell them."

She now runs between 30 and 40 cattle at a time across four heifer paddocks and four bull paddocks.

There's also six paddocks for the herd, as well as some river flat country. They strip graze and rotate paddocks and thanks to a 20ML licence from the Brisbane River, grow forage sorghum and barley for round bale hay and lucerne for square bales.

The past two years have seen significant milestones achieved, with Bec and Matt selling their first bull at last year's Roma Droughtmaster Bull Sale. Now they're hoping for success a second time around, taking two bulls to this year's sale on October 22.

Bec also attended Beef Australia in Rockhampton for the first time this year, showing her own cattle there.

It's been a long time coming since the days of grandad's Aberdeen Angus, but Bec is now where she wants to be. And even though Lyndsay has passed, she knows he would be proud of her herd.

Sponsored by
The quest for clay target shooting excellence got off to a good start at Tambo on the weekend, where a full house of 28 people took part in a coaching clinic.
Test
Eleven Maranoa residents will participate in round two of the Drought Resilience Leaders program.
Test
Making hay gave Showgirl state finalist for 2021 Jacinta Rockemer lots of lessons for life.
Test
Leanne Caban won the barrel racing and breakaway roping at the Hervey Bay Rodeo on New Year's Day.
Test
Yearling steers and heifers to feed were in demand at Dalby.
Test
There was a rain affected yarding of 566 head at Biggenden on Thursday.
Test
US wheat futures posted sharp losses for the second consecutive week.
Test
Queensland's south western train lines have all been repaired and reopened after heavy rain caused severe flooding that damaged tracks, forcing parts of the rail network to close for weeks.
Test