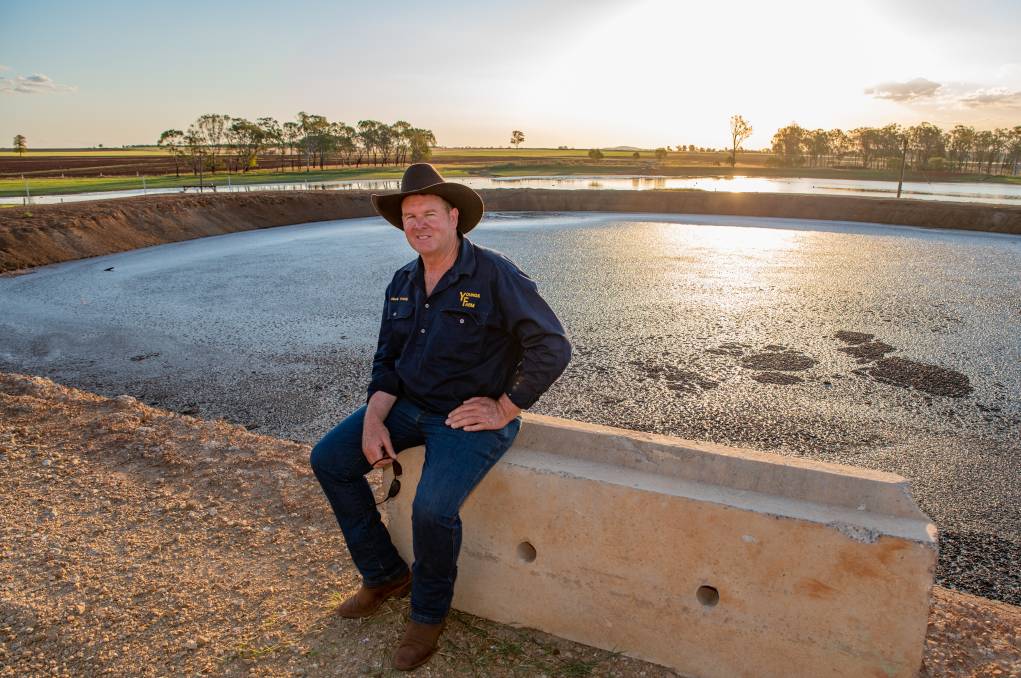 BROWN GOLD: Mark Young, Youngs Farm, Wooroolin, fills his new 30,000-litre slurry tanker with effluent from the ponds at the 8000 SPU piggery. He then applies it deep into the soil to minimise odour and improve soil fertility.

The grandson of a peanut industry pioneer is making 'it' happen with pig manure.

Ben and Harry Young were pioneers of the South Burnett peanut industry in the 1920s.

A century on, Ben's grandson Mark is carrying on that entrepreneurial spirit at his cropping and livestock operation on a block adjacent to his forebears'.

The custom 30,000-litre tanker is filled with effluent from the ponds at the 8000 SPU piggery, which supplies SunPork at Kingaroy.

It then applies the manure deep into the soil via a ripper or disc injector, which reduces odour, improves soil fertility, boosts crop yield and also saves them a significant amount of money on inputs.

The investment is already paying off, with 2021 the first year the soil hasn't received synthetic fertiliser.

"What comes out of the pigs' backside is worth $1 million a year in synthetic fertiliser," Mr Young said.

They ordered the FB Bossini B3 350 in October 2020 for A$145,000 (freight and options additional) and it arrived via container ship in July this year. 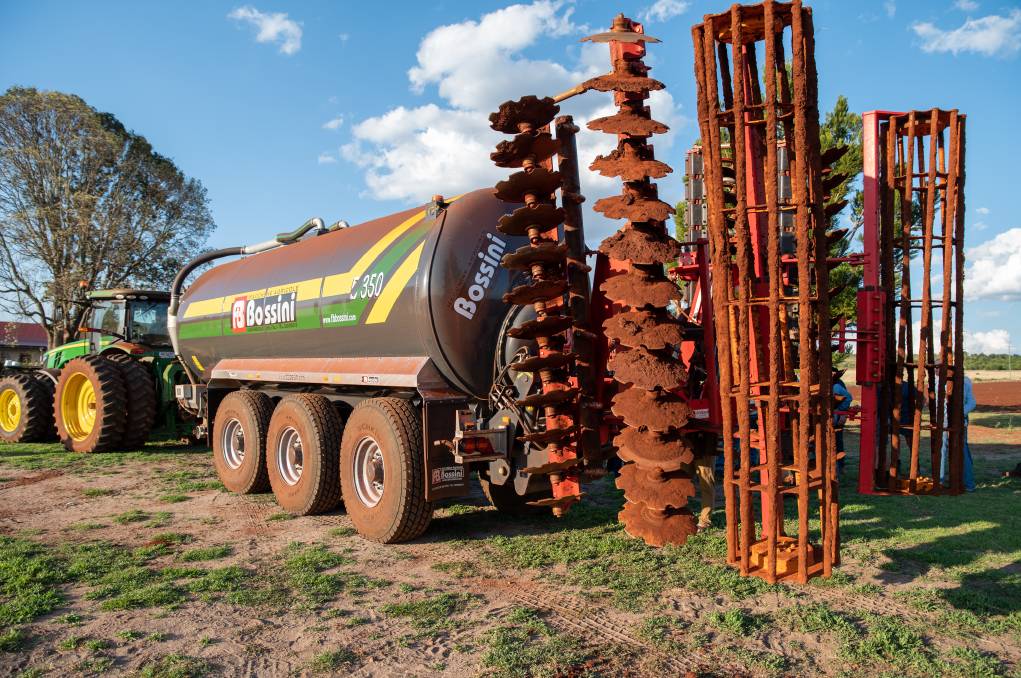 Sourcing the right machine for the job

While it sounds like a straightforward import process, Mr Young, his family, friends and agronomist spent months researching and talking with Oz Value AG Machinery state manager Carl Rackemann, who imported the machine.

"It was a pretty exhaustive process. We wanted certain wheel spacings, capacity, linkage, a company who would deal with Australia, and all for the right price," Mr Rackemann said.

That prompted the farmer and machinery dealer to travel to one of the biggest machinery expos in the world - Agritechnica in Hanover, Germany.

It took three trips to Europe and plenty of meetings to find the right company.

Mr Rackemann's next job was sourcing various implements to fit on the back of the machine.

"The dynamics of everything involved in this - and the upsides in virtually every direction from a farming point of view - I think are immense," Mr Rackemann said. 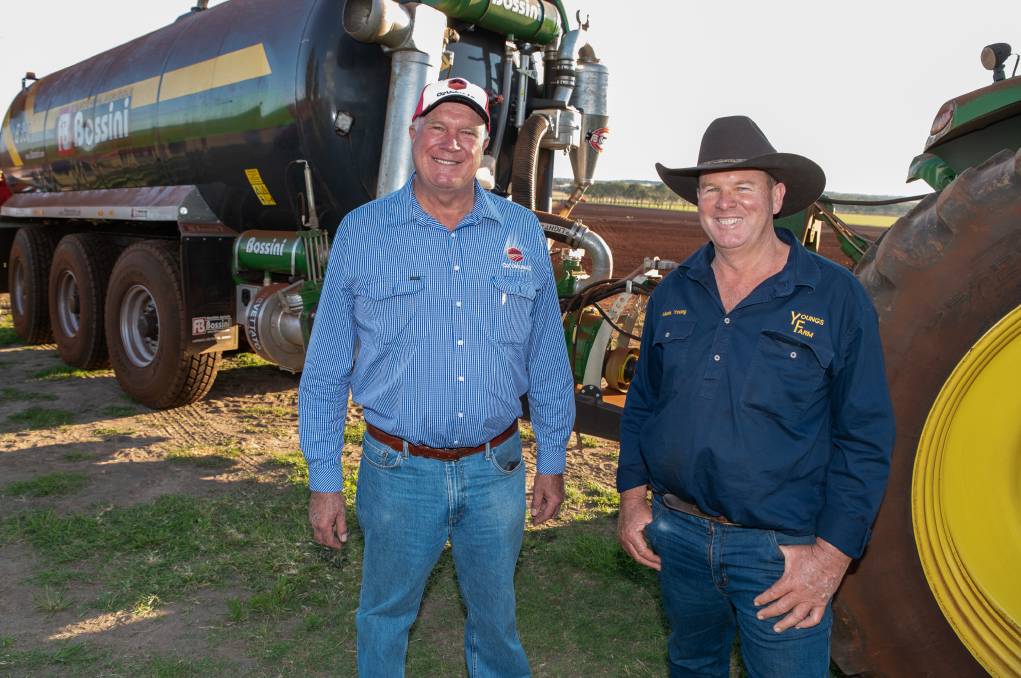 "My first experience with pig manure was when I came home [from school in 1982]," Mr Young said.

"There was one primary pond down there which was filled, and to solve that problem, dad got the earthmovers in to knock up a second dam. In time, that dam filled."

His father and the neighbours decided to go halves in buying a pump, some aluminium pipes and a single stand sprinkler.

Mr Young's next experience with manure was when he got a job at Bellgrove piggery at Gordonbrook.

"We baled 10 acres (4ha) and we got 100 5x4 round bales, and when you went out of the area to the one that wasn't treated with the pig manure, it wasn't even worth cutting or baling.

"So after that point, Dad and I thought, 'We really have to make more effort with our manure', and not long after we built our first irrigation dam."

Then at FarmFest one year, they bought a small travelling irrigator for $1500. It would cover a swathe 15m wide and 200m long, so they started treating 4-8ha per year.

"That yielded, from fence to fence, five tonnes per acre (12t/ha), which at that stage was very groundbreaking in the district to get such a big yield of corn," he said.

"At that point we only put it on the paddocks close to the piggery because we just didn't have the infrastructure to get it away from the piggery." They grew big yields of navy beans and peanuts and found grass and lucerne especially responded to the pig manure.

"When we first looked at it, for the deal to stack up, we needed more than a contract income. We felt we needed the logistics to take the pigs in and out of the piggery, but we also needed to make use of the effluent," Mr Young said.

At that point, they were irrigating 200ha between hard hoses and one centre pivot. They blended the fresh water dam with the pig dam in an 80/20 ratio, injecting it into the irrigation system or putting it through the hard hose irrigators.

While they saw reasonably good results, they used "quite a lot of water" and got a few odour complaints.

"The 'official' fertiliser bill was getting larger and larger and I said to the family at the time, 'We should be able to make as much money out of the effluent as we do out of the contracting of the pigs'," he said.

"It was very integral to the building of the piggery that we could get not only a contract income, we could also utilise the fertiliser on the farm."

Prior to their latest purchase, they did trial a bigger tanker at 15,000 litres.

From there he attended a field day hosted by University of Queensland Professor Mike Bell, who was discussing the declining fertility in the land and the deep placement of fertiliser.

With soil fertility up and input bills down, Mr Young wants to add to their peanuts, grains, forage and livestock.