Mr Walker, the runner-up for the 2021 Bob Hawke Landcare Award, attended the Australian Rangelands Society conference in Longreach last week, where a number of presentations on climate forecasting tools were made.

"It seems that the more funding they get, the more ambiguous they get," Mr Walker commented.

He believed it was because governments were partnering with universities, whose focus was more on research than on building commercial outcomes.

At one stage a Climate Mate with the Northern Australia Climate Program, Mr Walker said he had used the POAMA, or Predictive Ocean Atmosphere Model for Australia, tool in 2013 to help with decision-making as drought conditions worsened in their area.

"I'm disappointed to see that this is still being trialled," he said.

"At the time it was using data that was six years old - it's better now, but everything goes back into the research burrow, there's no commercial interaction."

Conference presenters looked at extending seasonal climate predictions beyond a year, and at the various forecasting tools available for the northern red meat industry.

Exploring which El Nino Southern Oscillation phase was more predictable, Dr Shamila Sur from the University of Melbourne said that predicting when the climate was moving from an El Nino to a La Nina phase was more certain than when trying to predict when an El Nino might be starting.

As far as moving beyond 18 months, Dr Sur said that had some limitations.

"We are currently working on that uncertainty," she said.

"We are doing research on identifying the climatic processes that contribute to a better understanding of ENSO predictability.

"There is still a limited understanding of multi-year droughts and floods."

Conference attendees quizzed presenters on the level of interaction between groups developing the multitude of tools to ensure that there wasn't any duplication. 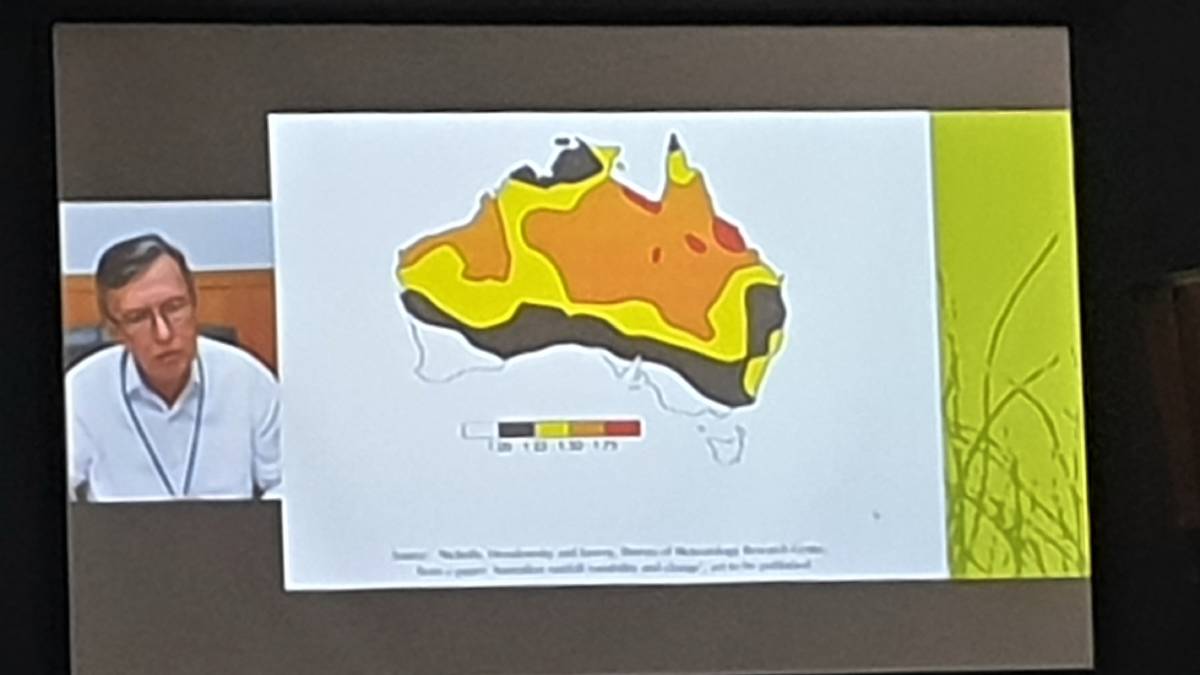 Roger Stone speaking to the rangelands conference about the northern drought hub.

Roger Stone spoke about the southern Queensland/northern NSW Drought Resilience Adoption and Innovation Hub, which will have nodes at Longreach, Roma and Stanthorpe in Queensland.

He was adamant that applications being rolled out for producers to use to develop their own climate plans needed to be explained face to face rather than online, in order for proper ownership to occur.

"There's little understanding of risk management in the community," he said. Unable to attend the conference in person, Shane Stone recorded a presentation.

That debate was prefaced by an introduction from National Recovery and Resilience Agency chairman Shane Stone, and regional advisor Bruce Scott.

Explaining that it wasn't sustainable for taxpayers and ratepayers to keep picking up the tab for Australia's disasters, Mr Stone said a study had identified that 97 per cent of disaster funding was being spent on cleaning up and only 3pc on mitigation.

"The public must step up - we all share the responsibility," he said.

"It's a difficult and at times painful discussion but it must happen because there will always be another major event," he said.

Quizzed on how already economically stressed communities could rise to the challenge of responding to disasters, Mr Scott said making a difference at a micro level was important, citing the work done at local government level to engage with residents.

"Queenslanders know now how to prepare for a cyclone," he said. "You keep your trees trimmed, you store your loose items - behaviours can be learned."

He emphasised the importance of cooperation in responding to a query about how to ensure different agencies didn't work at cross-purposes.

"It's important to support locals with local solutions," he said. "You have to create an environment that brings people together."

A poll running in conjunction with the debate found that 26pc of respondents thought that landscape health was the most important factor in building resilience, while diverse regional economies and people and communities each rated 25pc.