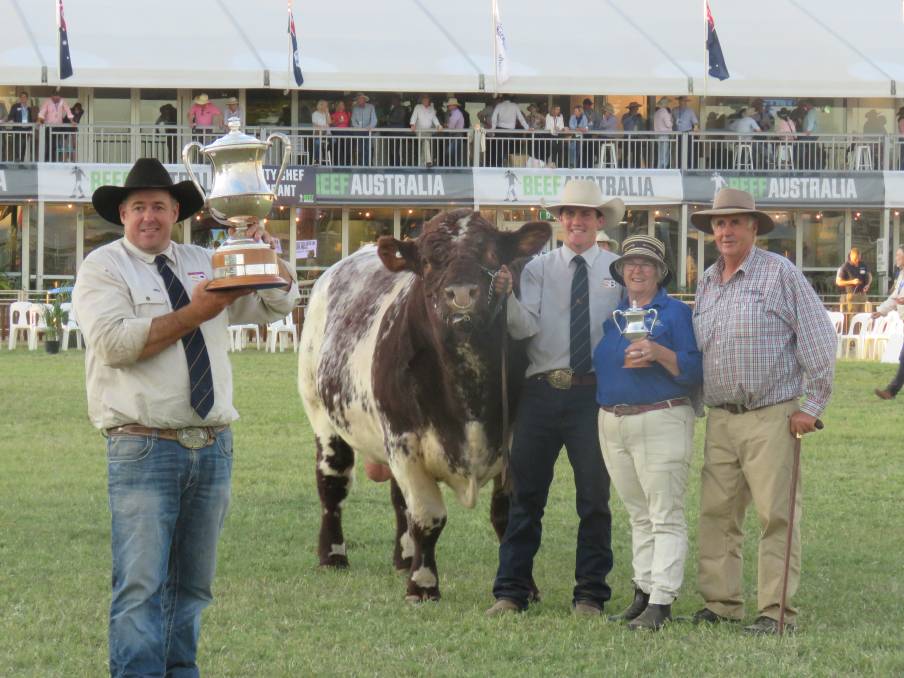 The Job families of Royalla, Moombi and Marellan Shorthorn Studs have combined forces in the '50th Golden Jubilee' Shorthorn Female and Genetic Sale, on Saturday, October 30, at Royalla, Yeoval NSW.

The Job families of Royalla, Moombi and Marellan Shorthorn Studs have combined forces in the '50th Golden Jubilee' Shorthorn Female and Genetic Sale, on Saturday, October 30, at Royalla, Yeoval NSW.

It's hard to overstate the influence the Job family herds has had on the Shorthorn Breed in recent history. They've collected more than 60 Royal Show, Dubbo National and Beef Expo Grand Championships as well as numerous sale tops and averages throughout five decades. But most profound is the footprint on commercial beef enterprises where the influence is greatest.

One of the greatest contributions to the three herds is the influence of the Isobel cow family. The original Isobel cow was a commercial female bought from the Simpson family, Gunnawarra, Gulargambone in 1971 for $290. She was a standout for the studmasters, Allan, Lester and Neilson Job. This cow family has been the foundation and the mainstay of the three herds, the prolific producers of superior females, top breeding and high priced bulls for many studs. They have a distinctive phenotype that's evident 10 generations and more. There have been eight Marellan Royalla Isobel females who've won broad ribbons at Sydney and Melbourne Royals and five from Moombi along with three National All Breeds Champion heifers. The spread of this cow family can be found in five countries and many Australian herds. Notable descendants include, Super Dazzler, the first Interbreed winner, Irish Isobel 38th, exported to the US where her genetics have returned through Sutherland Bundaberg. Four major Interbreed ribbon winners are all descendants of the original female, Super Dazzler, Vagabond, Ferrari and Ventura. The Isobel females exemplify the prefixes female selection philosophies, 'breed the best females and the bulls will happen'. 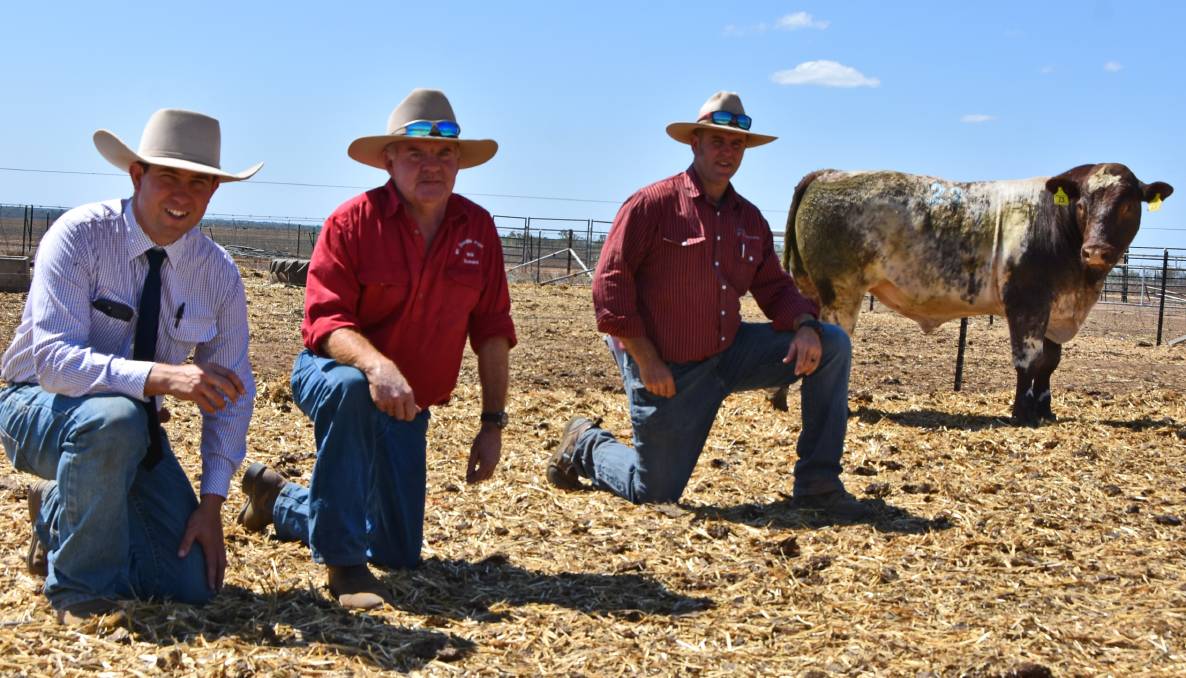 Including calves, Nic, Neilson and Sue Job, Royalla stud have selected 80 females, thirteen of these are descendants of the Isobel cow family. Another feature will be six daughters of the 2021 Beef Australia Champion, Royalla Ventura. The influence of Royalla Rockstar, Ventura's sire, will be huge in the sale. He's represented by 16 head. Rockstar is considered to be the most consistent sire ever used on Royalla with sons averaging over $20,000 in 2021 and topping at $56,000. Last year a son sold for $38,000 (CAD) in Canada and he now has progeny in six countries. Taking nothing away from his sons, but the best of Rockstar is in his daughters. A daughter was Grand Champion at Beef 2021 (Lot 16B) and two daughters and Ventura won the Sires Progeny class at the Melbourne Royal Shorthorn World Conference Show.

"Rockstar is Homo polled, safe to use on heifers, the type of sire to base a whole herd around," Nic said.

Also included in the Rockstar progeny will be Lot 27B, a full sister to Ventura. The Royalla offering will include, six donor females, cows and calves, joined and maiden heifers along with semen and flush opportunities. 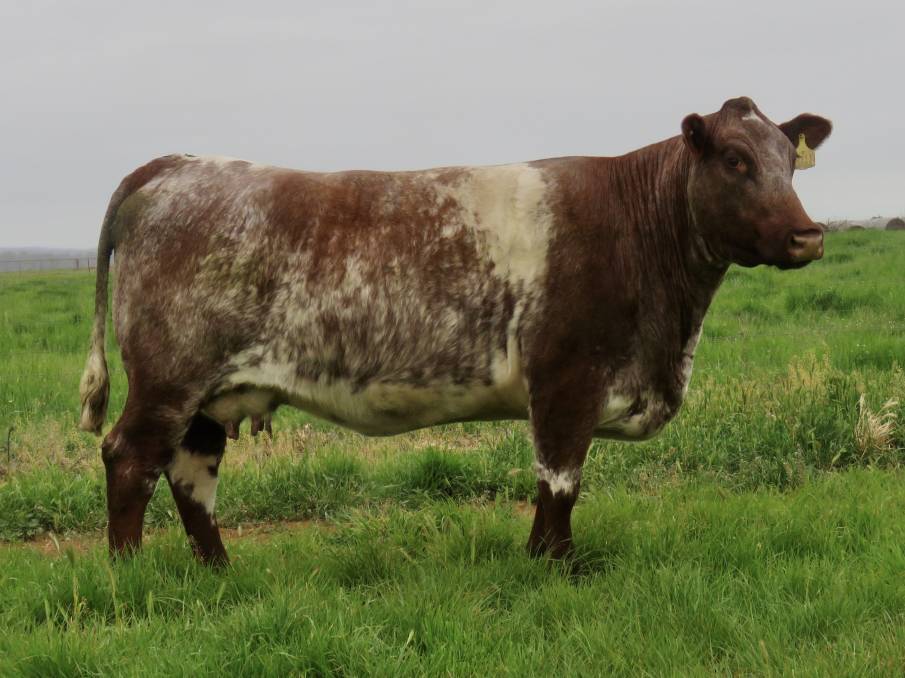 Royalla selection: Lot 24, Royalla Redwing M111 is by breed legend, Weebollabolla Theodore and out of the same cow as Royalla Ostentatious.

Lester and Sonia Job, Moombi stud will offer their entire "Q", 2019 born females. These 18 cows and calves will represent the best young females in the Moombi herd. Established in 1978 from a section of the Marellan herd, the Moombi stud has had enjoyed incredible success and a 'dream run' according to Lester. Moombi has collected in excess of 40 Championship awards at Sydney and NSW Beef Spectaculars, two Interbreed Horden Trophy winners and the Supreme Exhibit at the RAS (1600 entries) along with four Grand Champions at the Dubbo National. Featuring in the Moombi offering are daughters of Yamburgan Zeus L173, which according to Lester is, "one of the top three sires we've ever used". Other highlights include Lots 11 and 15, two cow and calf pairs from the Isobel family, which are both considered to be donor prospects.

Lincoln and Lisa Job, Marellan stud, Emerald, Queensland, will offer access to leading donor cow families that have never before released and that have prospered in the ticky country. These include the dam of Marellan Wow Factor, the top selling $38,000 from the 2021 Marellan Bull Sale. Her embryo lot is catalogued as Lot 74. The other donor in this lot is a top daughter of the greatest northern environment cow ever in the Marellan herd, Marellan Molly 9195. Marellan will also offer a young stud sire, a donor female from the Isobel family, frozen embryos, semen and three top joined heifers.