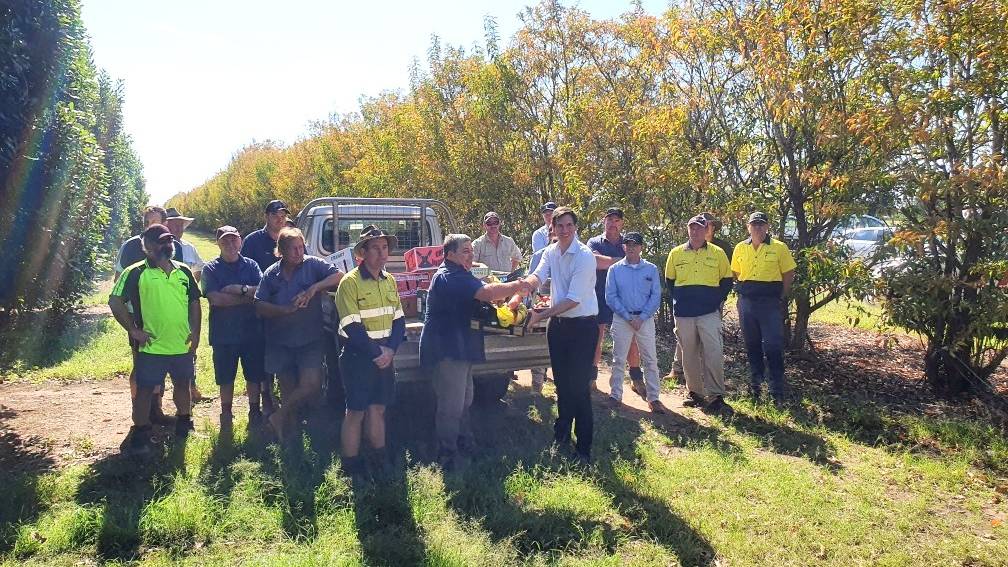 UP IN ARMS: A group of Bundaberg farmers gift Bundaberg MP Tom Smith with a basket of locally grown produce which they argue would be affected if a proposed coking coal mine would go ahead, north of Bundaberg. Photo: Supplied.

Bundaberg farmers argue a prospective coking coal mine north of Bundaberg would threaten viable agricultural land in the region.

Bundaberg farmers have rallied against a proposed coking coal mine, which they believe would threaten one of Queensland's largest food bowls.

Exploration company Fox Resources recently submitted an application for a Mineral Development Lease to undertake an exploration programme for a prospective coking coal mine north of Bundaberg.

The exploration process would take five years to complete and would allow Fox Resources to undertake seismic surveys and drilling in years two through to five.

The lease area would cover over 7800 hectares stretching from the residential areas of Branyan, right through prime farming land just minutes from the Bundaberg CBD, north to Avondale and east to Moore Park Beach.

A group of Bundaberg farmers recently presented their local member, Tom Smith with an abundant food basket, full of local produce, in the hope that they can win the heart of Queensland Minister for Resources, Scott Stewart.

The Wide Bay region has a diverse agricultural sector, representing 12 per cent of agricultural production in Queensland worth more than $1.5 billion.

Welcome Creek macadamia grower Geoff Chivers, was one of the growers who gifted Mr Smith with some of his produce.

Mr Chivers said thousands of locals depend on the longevity of Bundaberg's vast food bowl.

"The Fox Resources coal mine at North Bundaberg threatens the future of some of Queensland's most productive and valuable farming land and the associated water supplies," Mr Chivers said.

"We are urging Mr Smith to make an impassioned plea, on our behalf, to his parliamentary colleagues to protect farming land, to protect local jobs, to protect local water supplies and to reject Fox Resource's mineral development lease application.

"We hope that Mr Smith's colleagues will join him in his fight to protect Bundaberg's rich farming land, precious water supplies and the thousands of local jobs which rely on agriculture".

Coal "should not come at the cost of prime ag land"

Local member for Bundaberg Tom Smith, who has publicly opposed the proposal, said that he was proud to stand shoulder to shoulder with the region's growers to ensure that prime agricultural land remained untouched by any potential coal mine in the north Bundaberg region.

"Our community is stronger when we stand together and there is no doubt that we are all together in opposing the MDL3040 application" said Mr Smith.

"Whilst coking coal is important in the ongoing production of steel, it should not come at the cost of prime agricultural land, future jobs in horticulture and training opportunities within our region's farming industries.

"Minister Stewart has been very receptive to the voices that I represent across the whole of the Bundaberg region and I thank him for this as he works towards the final outcome."

Fox has no immediate plans for a mining lease

Fox Resources released a statement in response to concerns regarding the Mineral Development License (MDL) for a prospective coking coal mine north of Bundaberg.

Fox Resources said the future exploration program will be the same as what they've been doing over the past seven years and that further community consultation will be undertaken.

"All these studies are required before a mining lease can be considered.

"If a mining lease is applied for in the future, Fox will engage with The Department of Environment and Science, and community consultation will also be undertaken and all concerns will be addressed through consolation with all relevant stakeholders. There are no immediate plans for a mining lease."

However, if a Mining Lease is applied for in the future, Fox Resources said it would be in full cooperation with all stakeholders and that it would employ local workers and contractors.

"Fox Resources has met various sections of the local farming community. If a Mining Lease is applied for in the future, further community consultation will be undertaken, and issues such as protection of prime agricultural land and water supply will be addressed," the statement continued.

"All drill holes which are the same as standard water bore exploration holes, are completed by being full rehabilitated, with all completion work approved by the Department of Mines, The Department of Environment, and the Bundaberg Regional Council."