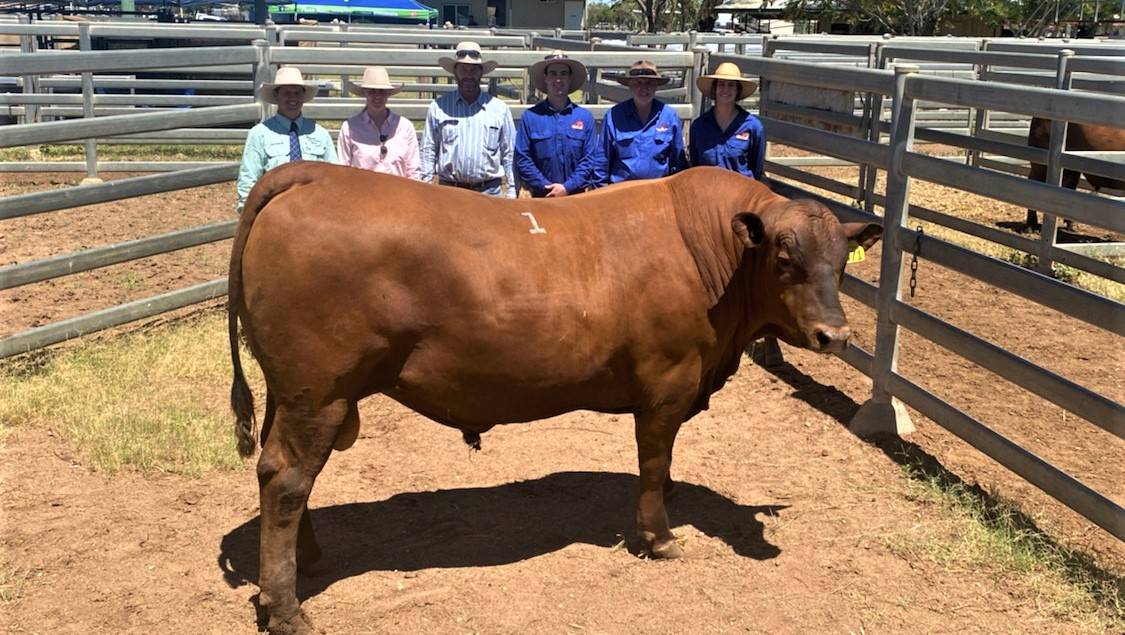 The final result of a 93.75 per cent clearance was a welcome outcome for the Close family, who travelled up from Victoria's western districts for the sale.

"It was the largest number of bulls we'd offered, the first time as the sale's sole vendor, and we achieved our highest average - you've got to be happy with that," Simon Close said.

The Topstock sale in the past has also featured traditional black Angus genetics from fellow Victorian vendors, along with around 60 bulls from Kurra-Wirra, but this year the stud put 112 bulls up for sale, averaging $5723.

The other five black Senegus bulls were sold at the conclusion of the auction.

Mr Close said the top priced bull had a homegrown pedigree and was a classic Kurra-Wirra bull.

Unique in having 50 per cent red Angus composition as well as being a double slick gene carrier, Mr Close described him as being a real northern-type bull with a lot of power.

Weighing 1035kg at 28 months, his P8 and rib fat depths were 13 and 8mm, while his eye muscle area registered at 135 square centimetres and his intramuscular fat was 4.9pc. His scrotal circumference was 40cm.

Buyer Trent Radel said they were giving the Senegus genetics a trial, liking the fact that they were tropically adapted and flatback at the same time, and so didn't have MSA grading issues.

"Apart from that, you're always chasing the same thing - length, weight gain, and double poll genes save me another job," he said.

The family purchased two bulls in the end, to put with Charbray cows on their Augathella country.

Malarga Grazing Co's Ben Hughes, who bought the second top-priced bull online for $18,000 after flying to Roma to inspect them during their preparation at the Cameron family's feedlot, said because he was in ticky country, he was interested in the slick gene.

"I first saw them when I was studying at Marcus Oldham College and we went there on a farm tour, and thought I'd buy one to try," he said. "We've got to have Brahman content as a base at home but the money's there for the crossbred cattle.'

His herd is currently 75pc Brahman with Charolais, Charbray and Angus crosses and he plans on putting the new bull with 30 or 40 cows to test out the result.

While he was the underbidder for a couple of other lots, Mr Hughes said he was content with one Senegus bull at present.

The 28-month bull was out of Kurra-Wirra Sebastian K19 and had 62.5pc red Angus content.

The sale had 20 bidders registered online from Queensland, 17 from Victoria, 14 from NSW, and one each from Western Australia and South Australia.