LABOUR ESSENTIAL: Retaining access to a ready and willing pool of people interested in working on dairy farms is essential.

New research examines the competitiveness of labour in the Australian dairy industry.

Retaining access to a ready and willing pool of people interested in working on dairy farms is essential, and equally essential is ensuring most farmers are sufficiently profitable to afford the cost of employing enough labour to operate their business efficiently.

The affordability of appropriately skilled labour has deteriorated in the past 20 years with the total employment cost of labour, including management, increasing significantly. Although some increase in the absolute labour cost (not inflation adjusted) must be expected given a combination of inflation and the limited opportunity to replace people with various forms of technology, the rate of increase has been high.

This can be seen in Figure 1, which outlines the labour cost per cow in the past 18 years for all states of Australia as well as New Zealand and the United States. 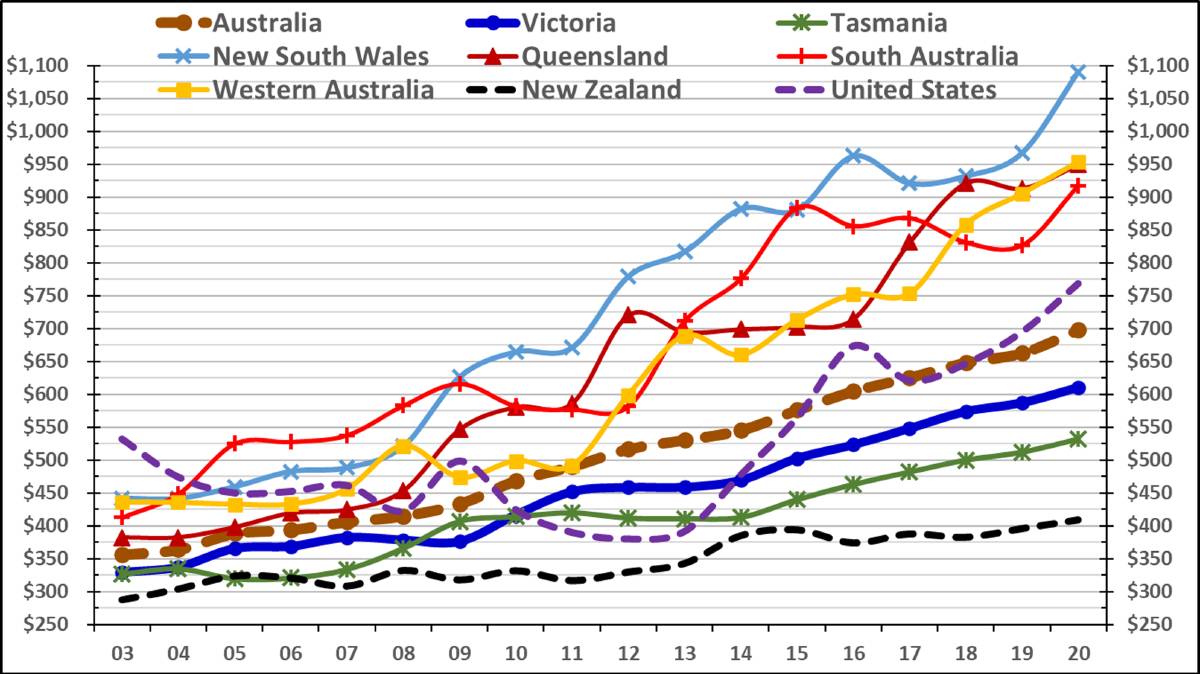 Labour cost per cow is the most important ratio for monitoring labour financial performance due to its correlation with profit. This was reported in a paper that I had published last year, which was based on the analysis of a large, unbiased dataset of Australian dairy farm performance.

READ MORE: Time for dairy to get 'outside the square'

Importantly, referencing cows in a labour ratio ensures a causal link with profit. Ask almost any dairy farmer what tasks they spend most time undertaking, and they will reply milking the cows, feeding the cows, drafting and moving cows, maintaining the health of their cows, and ensuring their cows get pregnant.

The next most time-consuming set of tasks are likely to be related to their land (hectares), including applying fertiliser, renovating pasture, and growing and conserving forage supplements.

Labour cost per cow has increased rapidly on most Australian dairy farms and it is now significantly higher than in competing pasture-based countries and similar to the cost in the US feedlot industry. This high labour cost per cow can be broken down into two components, the unit cost per person or per hour and the number of cows that are being farmed per person.

How do Australian pay rates compare to other countries?

I am not aware of any relevant comparative studies of international farm salaries. However, a comparison of minimum wage rates per hour is likely to be relevant, with all countries employing farm staff at a range of pay rates above the minimum wage, with the most junior often being initially employed at the minimum wage.

Figure 2 outlines average minimum wage rates for eight countries for the period 2015-2020, with all employment-related costs such as superannuation, payroll tax, employment insurances and other levies also included. 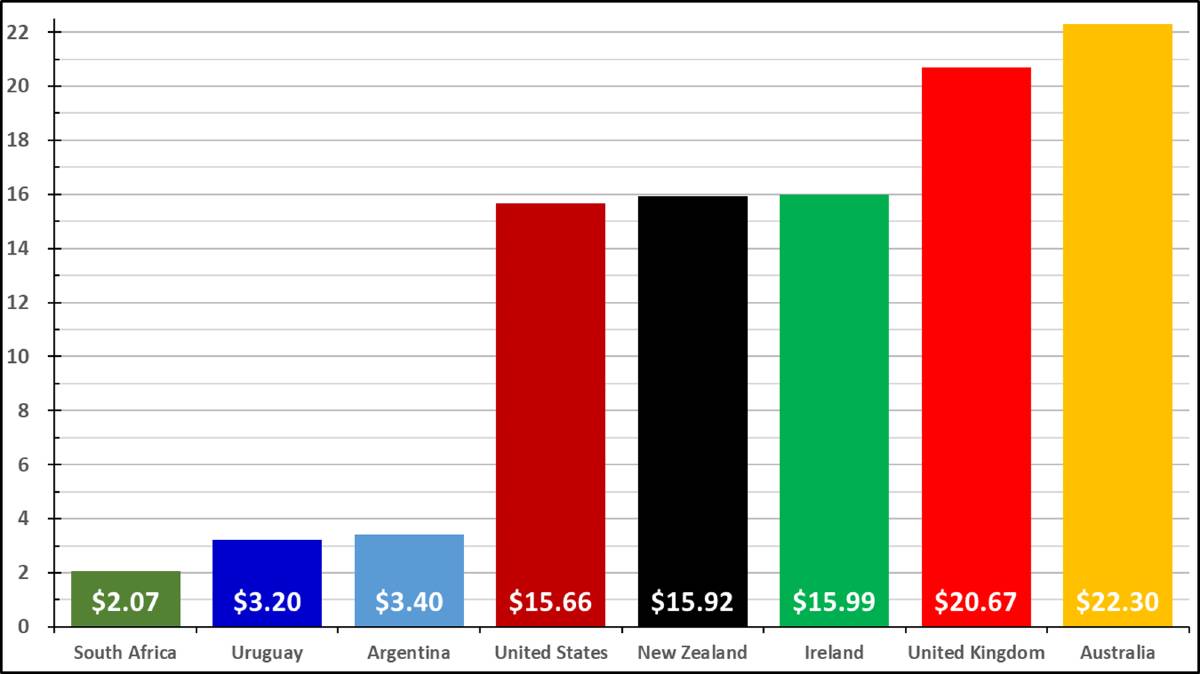 The United Kingdom pay rate has been significantly influenced by a period where the pound appreciated against the US dollar, and it would be reasonable to presume that the UK wage rate would revert over time to a smaller premium to the US and Irish values.

The Australian minimum wage is around 40 per cent higher than for US, NZ and Ireland. If just the differences in 2020 wage rates were calculated, then this difference is somewhat lower at 30-35pc.

'Lower levels of profitability in Australian dairying in recent years has also reduced the level of investment farmers can make in infrastructure and technology...' - David Beca

The cost of management across the more developed countries of Australia, NZ, US and Western Europe are estimated to be similar, with these comprising around 40-60pc of the labour cost on average-sized farms. So it can be concluded that Australia's 30-40pc higher wage rates for employed staff would convert into a 15-20pc premium for total labour costs.

Figure 3 highlights the potential impact on the comparative performance of Australian dairy farm labour costs if a 20pc premium on wage rates was removed. 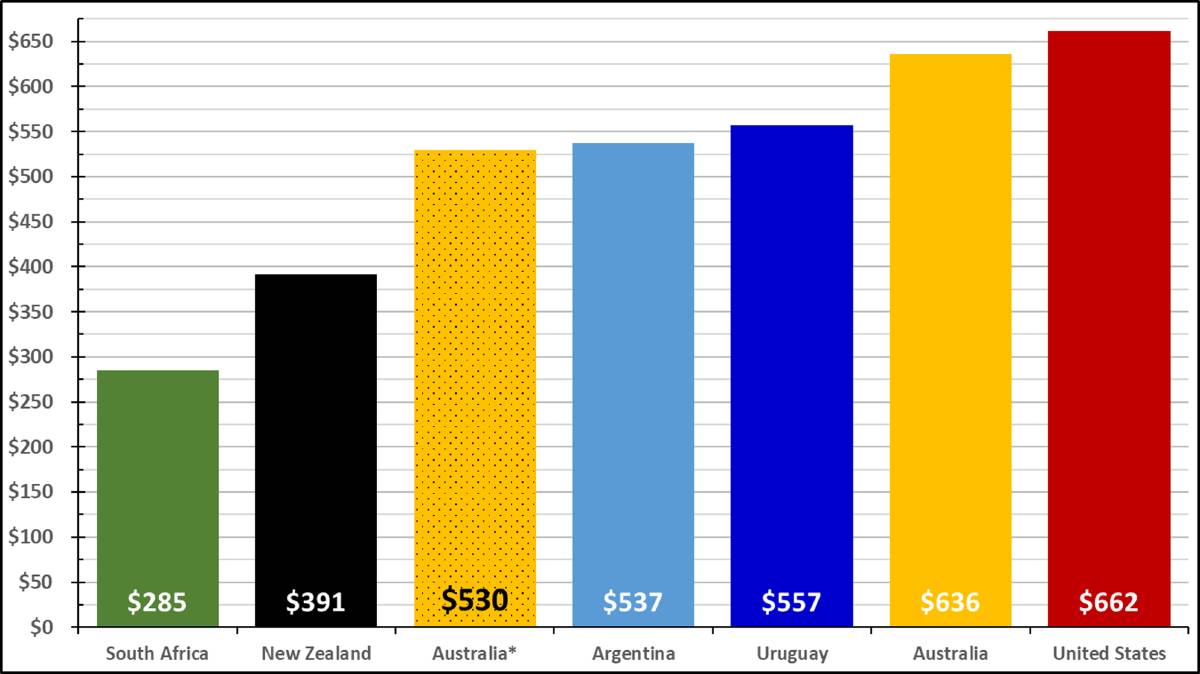 The dotted yellow column marked with an asterisk and a value of $530 per cow represents this adjusted value, which is more competitive with Argentina and Uruguay but still at a large premium to NZ.

So the unit cost of labour in Australia includes a considerable premium to other countries on what is the second-largest cost centre in a dairy business after total feed cost. Total labour costs (including management) generally comprise around 20-25pc of total expenses on Australian dairy farms.

The primary ratio for measuring labour efficiency on a dairy farm is cows farmed per full-time equivalent person. This ratio has also been confirmed to correlate with profit and it includes the important causal link with cows.

There are a number of factors that will influence labour efficiency including the level of infrastructure improvements and the size of the dairy shed, the level of technology utilised such as cup removers, and the skill level of management in activity planning and task implementation.

Another important factor is the production system. As the percentage of pasture in the diet decreases and more time is spent on supplementing cows, along with the increased focus on individual cow performance, the requirement for more time to be allocated per cow is increased. If a comparison is made between NZ farmers that include on average 75-80pc pasture in the diet and US feedlot farmers with no pasture in the diet, then NZ farmers have close to twice the labour efficiency of their US counterparts as outlined in Figure 4. 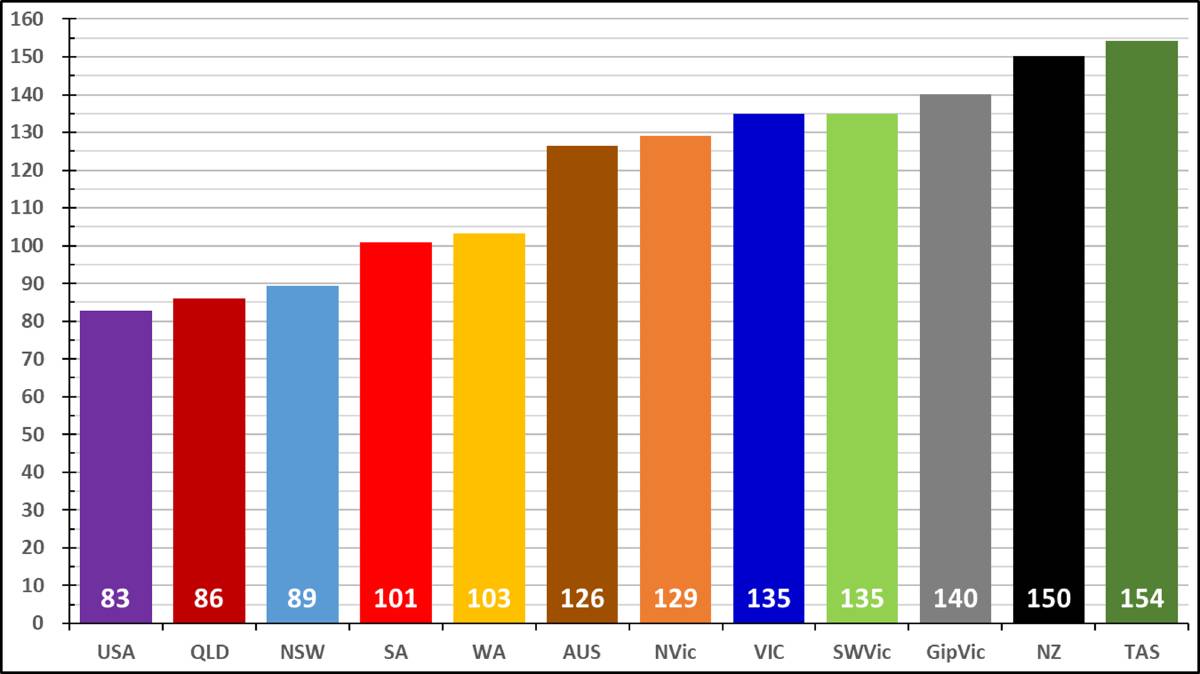 However, the significantly lower labour efficiency in Queensland, NSW, SA and WA could only partially be explained by the further reductions in pasture as a percentage of the diet and would suggest there are some other unrealised opportunities to improve labour efficiency compared with the balance of Australia.

What are the opportunities?

The Australian dairy farming industry has been experiencing poor productivity gains and increasingly low levels of profitability for the past two decades, with national milk production contracting over this period. All Australian businesses must accommodate some of the highest, if not the highest, wage rates in the world, which inflates the total labour cost on average Australian dairy farms by 15-20pc. With the labour cost comprising 20-25pc of total expenses, this results in total expenses being inflated by around 3-5pc.

Lower levels of profitability in Australian dairying in recent years has also reduced the level of investment farmers can make in infrastructure and technology, which will also have negatively impacted on investment that can increase labour efficiency and productivity. These factors can also make it more difficult for farmers to attract and retain staff.

There may be opportunities for many farmers to reduce their total demand for labour by adopting a production system that includes a higher percentage of pasture in the diet and less supplement, and one that requires less time to monitor and manage higher-performing cows.

There is also likely to be an opportunity for many farmers to improve their knowledge and skills in organisational management so that farm activities and tasks can be completed in fewer hours without changes in infrastructure or technology. This opportunity would appear to be more relevant to farmers in the states of Queensland, NSW, SA and WA.

The story How competitive is Australian dairy labour? first appeared on Farm Online.