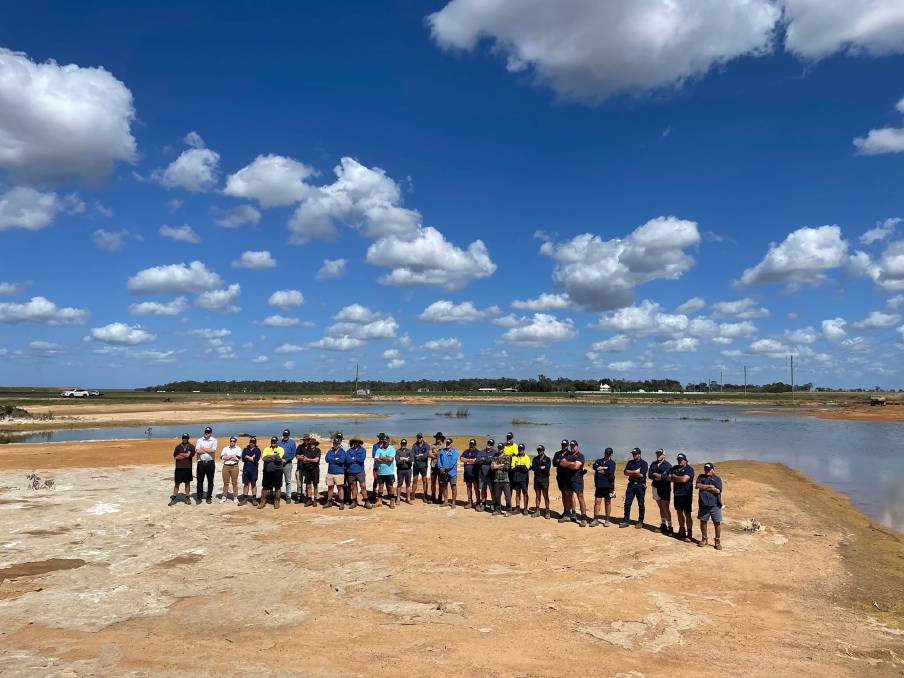 Farmers have marked the two-year anniversary of the Paradise Dam controversy.

Bundaberg irrigators held a press conference yesterday to mark the two-year anniversary of the Paradise Dam controversy, revealing how they've been forced to "pray for rain" and buy in water at high prices.

Meeting at Robert De Paoli's property on the eve of the anniversary, the farmers called on the State Government to restore the dam's wall height to ensure their economic future.

Farm group Canegrowers has also urged action, saying cane and peanut crops were at risk along with growers' mental health.

In 2019, then Water Minister Anthony Lynham announced Sunwater would be releasing 100,000 megalitres of water to lower the dam wall due to structural safety concerns.

Mr De Paoli grows sugarcane and zucchinis beside the Bundaberg main channel which was built in the late 1970s to deliver water to farmers.

He said his current 22 per cent water allocation was not enough to grow his crops.

"My own farm dam is nearly empty and I have been forced to buy temporary water at very high prices in order to actually grow a crop this year," Mr De Paoli said.

"If I hadn't bought temporary water from other farmers to grow my zucchinis this year, 50 people would be out of work.

"I don't think the government understands the impact their decision to lower Paradise Dam has had on this community."

Childers farmer Joe Russo said many farmers were suffering and were often heard to be "praying for rain".

"The next stage of the business case will be delivered to government in the coming weeks and we remain on track to make a decision on the future of Paradise Dam by the end of the year," Mr Butcher said.

Agribusiness lawyer Tom Marland, who is leading the Paradise Dam class action, said with low water allocations and no certainty about the future of the dam, farmers were left with few options.

"Sadly, the Bundaberg farming community has gone from being motivated and feeling positive about the future to discussing mental health issues on a daily basis," Mr Marland said.

Mr Marland hoped the government would decide to reinstate the wall of Paradise Dam when they considered their expert report.

Canegrowers has called on the State to extend the 50pc water price rebate being offered for horticulture crops to other irrigated crops.

Chairman Mark Mammino said even though only 22pc of the water was available, they still had to pay the high fixed charges on the total nominal allocation no matter what was available for use.

"The Queensland Government could show some compassion and provide us with immediate financial relief by making its inequitable water price reduction policy fairer and extending the 50pc rebate to all crops," Mr Mammino said.

"It's so frustrating that we have excellent sugar prices but not the water to get the most out of our cane crop this year or next, because now is when the young cane should be getting a start for 2022."

Mr Mammino said some cane growers who usually grew peanuts in rotation were holding back on preparations for a crop because it was too dry, putting the 2022 peanut harvest from February to June at risk.

"The immediate anxiety is on top of the long-running frustration about a lack of clear direction for the future of water storage in the region. This uncertainty is having significant impact on growers' mental health.

"We've been calling for a quick decision but two years on we are still unable to move on and plan our futures with any certainty. The Government needs to come clean on what the future of irrigation in this region will look like."