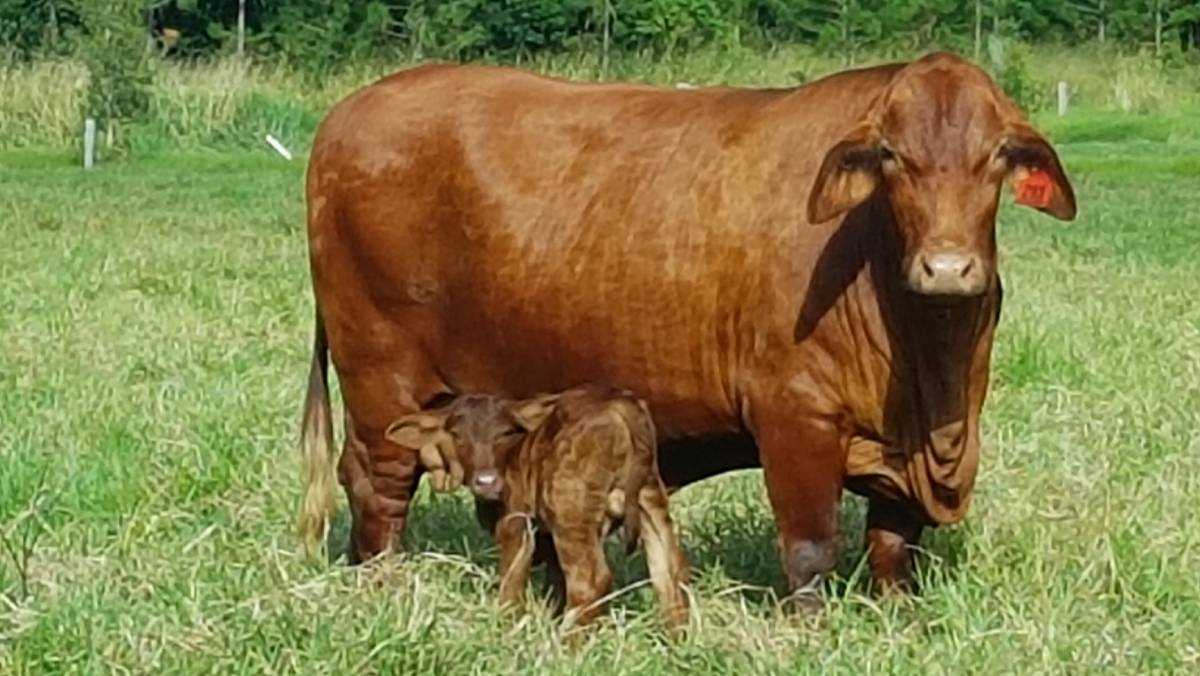 Top genetics: Jateebee Flame 328 with her third calf by Duff Glen Idol. The Jatabee and Duff studs have been integral to the Kennedy Springs Brangus program.

Meeting the butchers trade has been a successful venture for Kennedy Springs Brangus.

Producing quality Red Brangus cattle for the butchers trade in North Queensland has proven to be a successful venture for Justine Douglas and her husband Rusty Smith.

Operating as Kennedy Springs Brangus, the pair run their breeding program over their two properties and agist cattle on another, all in the Kennedy Valley, just west of Cardwell.

They purchased their first property, originally a cane and cattle farm, in 2004, though they only grew cane for a few years before converting it back to a cattle operation.

"We originally only intended our farm to be a side business apart from our full time professional careers, but in 2015 after setting ourselves up financially and growing to love cattle production, we decided to go full time on the farm and purchased our second property, Kennedy Springs, which was just up the road," Justine said.

Justine and Rusty introduced Red Brangus into their herd in 2007.

"Around that time we bought three limousin heifers and a bull off Rusty's parents situated at Amamoor, but they weren't cope well with our climate," Justine said.

"We'd always liked Brangus so we AI'd the heifers to a Red Brangus bull (Bimbadeen Q1000) and bred two composite bulls which had amazing weight for age, length, and depth, which were very fertile and coped with our climate with no troubles," she said.

"We chose Red Brangus as the majority of our cattle were red. From there we decided to breed up our own Red Brangus herd by introducing a Brangus bull to each new generation of heifers .

"We wanted to produce good beef cattle for the butchers trade and liked Angus but again they would have been be too soft for our country so we went with Brangus with a higher Angus content.

"We're happy with their doability, temperament, fertility, weight for age and good carcase returns at any age."

Home: Justine Douglas at the entrance to Kennedy Springs, just west of Cardwell, which she runs with her husband Rusty Smith.

She said they now only have Red Brangus bulls but some of the cows and heifers are still crossbred (between 50 to 90 per cent Brangus, with the balance being Limousin).

They also have some stud Red Brangus cows and heifers, which are mainly utilised for breeding bulls.

"Over the years the Brangus content is increasing as our Limousin x Brangus cows are replaced as they get older.

The crossbred cattle, particularly the ones with Limousin heritage have very good weight for age and easily finish at an early age. We plan on replacing this trait selecting the right Brangus bull for our operation. In the end we will have a predominantly Brangus herd."

They generally put their bulls in the paddock in September and take them out in February as to avoid calving during the wet season. Several years ago they started culling heifers/cows on temperament, doability, fertility, age and soundness.

"Now we have a difficult task as most of our breeders have the traits we want. We have a paddock full of potential replacement heifers that are going to be hard to cull. Femininity, tick and fly resistance and progeny growth will be factored into our selection process. We only run 80 breeders so we need to make sure they fit into our program. Our fertility rate this season is sitting at 93pc."

RELATED READING: Success with Brangus over crossbred cows at Monto

Up until 2019 they used to sell older steers finished on grass to the meatworks but they desired to sell younger finished butchers cattle.

"We approached the late Chris Greenwood, at Morganbury Meats in Walkamin, about buying our cattle. Chris was kind enough to give us a go and gave us some advice on how to finish cattle to suit his wholesale operation.

"We did our homework, worked out a economical finishing ration to accompany the cattles' grass fed diet and produced a product he was very happy with. We continue to sell young finished cattle to Morganbury Meats as milk or two-tooth, 22 to 26 months-old's at 550 to 620kg live weight. We feel good about producing grassfed beef for local markets for many reasons." 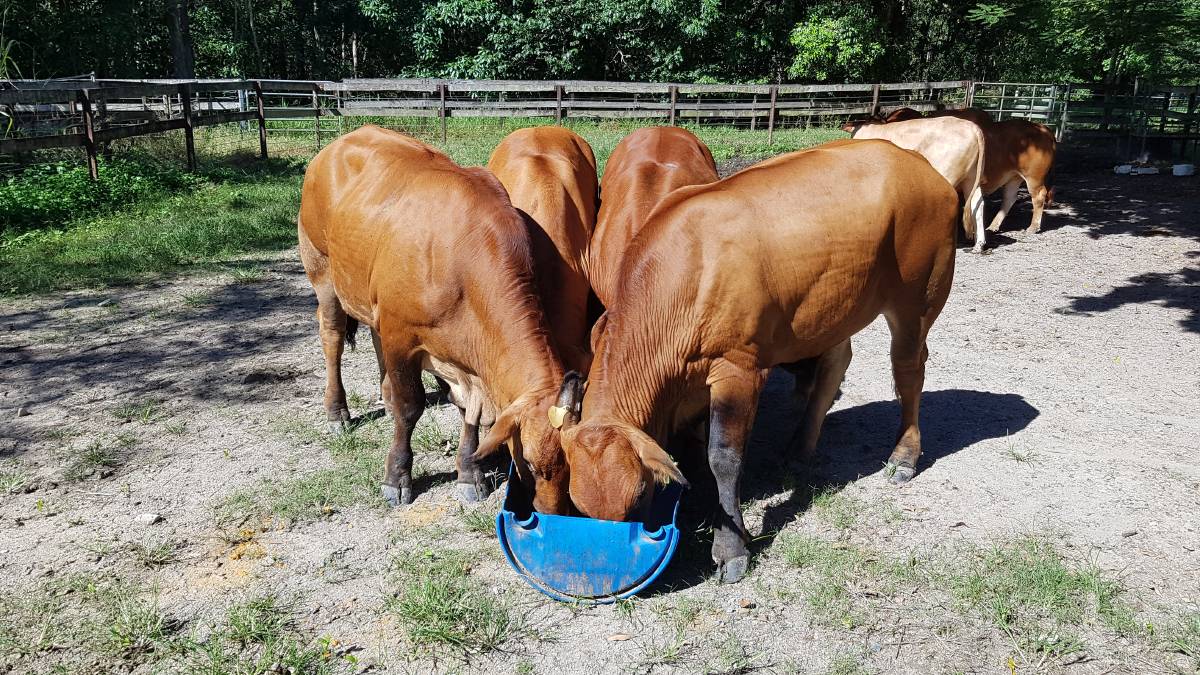 In effort to strengthen and diversify their herd genetics, Justine and Rusty bought heifers from Jack Walker's Jateebee Red Brangus stud in Theodore through the Classic Red Brangus sale in 2017 and again in 2018 where they also bought a Jatabee bull.

"We're currently running that bull, Jateebee Qualify, and five Jateebee cows. Qualify's scan data especially his EMA and fat scores impressed us along with his clean coast and temperament. Our Limousin cattle lacked a little in the fat scores if finished on grass so we decided to add in bulls with a higher fat content to get better returns. Our others bulls are from Duff Red Brangus which we purchased from in 2013 and 2016.

"In 2018 we purchased a PTIC heifer from Jateebee: she was in calf to a Canadian Red Angus bull, Red Crowsfoot Ole's Oscar. Her calf is now a rising three year-old, which is being run with a selection of Brangus-cross cows and heifers. His first progeny hit the ground this week and from early accounts look very good. We like the Jateebee heifers. They're very femine, fertile, clean coated, deep red in colour and have good length and depth." 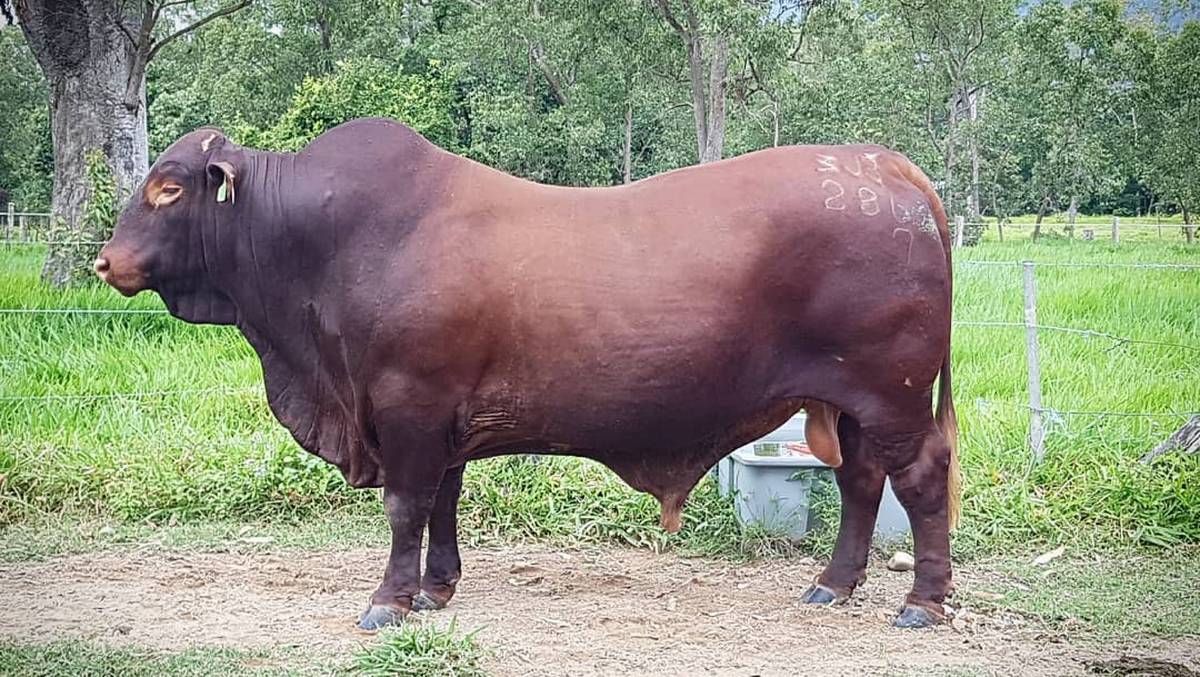 Qualified winner: Jateebee Qualify has grown and adapted well to the North Queensland tropical coastal country at Kennedy Springs. Justine and Rusty have been very happy with him and his progeny.

Justine said their focus remains on producing an even line of butchers cattle for the local trade, and to sell a few Red Brangus bulls each year.

"We're aiming to increase the Angus content of the cattle to a level that will better cope with our climate. We also try to help promote the Red Brangus breed and the benefits of Brangus in cross breeding programs. And we want to sell our quality surplus replacement heifers to good breeder operations in the region."

She said growing good quality cattle is one thing but being able to sell to the market you want isn't as easy, particularly when you're a relative newcomer and are running a small operation.

"It's a shame we have to transport so much beef from southern states to North Queensland when we can grow quality cattle here, particularly on the coast and the Tablelands. It takes a bit more effort but it's rewarding to be able to go into a butcher shop and buy back your beef and have your friends and family do the same."

Their country consists of coastal lowland woodland at the foothills of the Kirrama Range, which is relatively flat with areas of undulating country, with granite derived soils. The 'Springs' part of their business's name came about as the main property has numerous spring fed systems feeding into three creek systems on their properties.

This year has been kind to Kennedy Springs in relation to rainfall.

"Most of our paddocks are looking a picture and we have plenty of grass. We had a decent 2020/21 wet season followed by good winter rain thanks to several inland troughs accompanied by south-east trade flows. Grass is plentiful and creeks still have a good run."

She said this weather has been in sharp contrast to the previous two seasons which she described as dreadful.

"We had poor wet seasons followed by a very long dry season and no storm rain in the wet season build up. We weren't really geared up for 'coastal drought' as we called it. But it was a good reminder that we need to be careful in managing our carrying capacity."

Justine said though they only run a small operation, they're proud of producing a quality sustainable product, with animal welfare being of high importance in all that they do.

"We both have a background in natural resource management, having formerly worked with the QPWS for many years both on Cape York and in the Wet Tropics. Our properties are listed as wildlife sanctuaries with the Wildlife Land Trust and we offer farm stay accommodation through our Kennedy Springs Country Escape business. Our cattle have a pretty good life at Kennedy Springs."