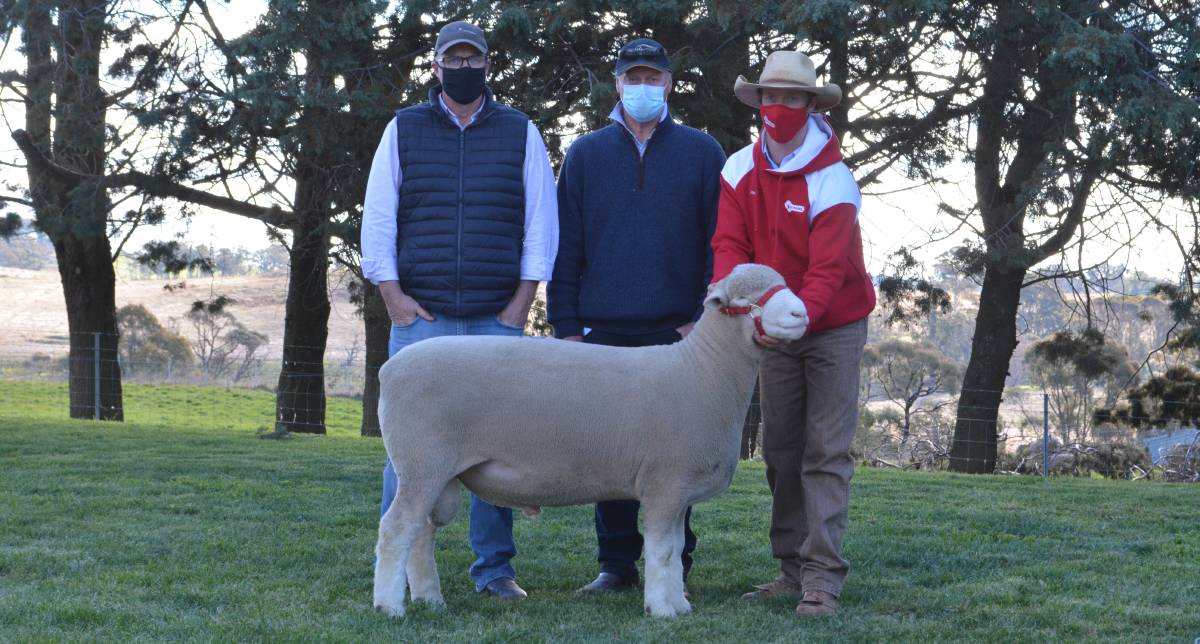 Continuing its industry leading performance seen throughout the year, the Tattykeel Poll Dorset stud has set a new Poll Dorset breed record average of $15,954 at its 46th annual stud sale at Oberon yesterday.

Overall, 22 of 25 stud Poll Dorset rams were sold by the Gilmore family of Tattykeel to set the astonishing record which surpassed the $8700 record average that the stud set at its 2020 sale.

The breed average milestone not only out-averaged last year's result by over $7000, but it matched a number of leading bull sale averages achieved across the country in recent months.

Auctioneer Joe Wilks of Wilks and McKean Livestock and Property set the atmosphere early making the comment "never in my time in the business have I stood over a line up like this." The sheep spoke for themselves and it didn't take long for a fast-paced bidding frenzy to take place.

Bids from several well-known seed stock producers from across four states fuelled the buying, with four rams sold for in excess of last year sale top of $24,000.

Included in the high-profile draft of rams was Tattykeel ET200080, an elite sire prospect that was purchased for the sale top price of $36,000 by Garry and Catherine Armstrong of Armdale Park Poll Dorsets, Marrar and Karl Sinclair of Kinsale Poll Dorsets, Lidster near Orange.

A son of Tattykeel 'Jackpot' 150206 and out of Tattykeel 160082, the April-born ram weighed 169 kilograms and was first in the pair class at both the Dubbo NSW State Sheep Show and Cowra NSW Dorset Championships, and second in the shorn class at Sydney Royal Show.

Garry Armstrong said he first noticed the quality ram at Cowra and thought he had a lot of style and class.

"A beautifully balanced ram, he has a lot of meat and style about him - he really is a hard ram to fault, he has everything we are looking for in our stud program at the moment," he said.

"He will get 100 ewes or so in the first AI (artificial insemination) program and will be give him a mix of ewes at home and see what works for the first year and go from them."

Joint purchaser Karl Sinclair made the comment "it is a predictable outcome buying a sheep of that quality".

"He has the scale, balance, good neck extension, thickness and soundness I was looking for. He is a ram that has done a lot in the last three to four months, and I look forward to selecting some special ewes to join to him through AI," he said.

A full sibling to the sale-topping ram reached the second-top price of $34,000, while another sold for $19,000 resulting in the three full-flush siblings averaging a hefty $29,667.

The Scott family of Valley Vista Poll Dorsets, Coolac picked up a new stud sire in Tattykeel AI 200274 for the third-top price of $32,000.

"He is the type of ram we are looking for at Valley Vista - the specific style we have come here to find," Joe Scott said. "We've bought three or four rams over the years, and it is a certain family line we were chasing there and it should click in well with what we have got.

"He will come home for a couple of days with a few ewe to get working, then he will go straight up to the AI centre to be collected."

A 25 per cent semen share in the ram sold to Hillden Poll Dorsets, Bannister.

The Tattykeel stud reserved the right to collect semen in the three top priced rams. Graham Gilmore said they were very, very proud of the sheep they presented this year.

"These sheep are the best I have ever stood over," Mr Gilmore said.

"A special thanks to James - he wears his heart on his sleeve with the Poll Dorsets, and he is probably one of the most passionate people I have seen in the industry. I congratulate him on his preparation of the sheep."

"Breathtaking" was the word James Gilmore of Tattykeel used following the record-breaking sale.

"We put a lot of work into it, and a lot of the genetic gain we are getting is through embryo transfer and linebreeding the animals and we are getting rewarded for it," he said.

"And those animals that were bred on those traits, the top of them made the better money."

Buyers from New South Wales had competition from several online purchasers from Victoria and Tasmania all rallying to get their hands on stud ewes which drove prices to a $4800 high.

The $4800 high-selling ewe was purchased by Will Milroy of Rangeview Poll Dorsets, Pipers River, Tas, as part of his draft of three SIL ewes which averaged $4233.

Tattykeel ET200520 was the ewe that caught the eye of many being the full ET sister to the junior champion ram from the Sydney Royal Show, Tattykeel 200523. She was also joined to Tattykeel 'Masterclass' 200060, the supreme exhibit of the Dubbo NSW State Sheep Show, which made her a valuable article.

An online buyer from Euroa, Victoria, selected the other unjoined ewe which made $3600, Tattykeel AI200191.

The sale was conducted by QPL Rural - Livestock and Property.