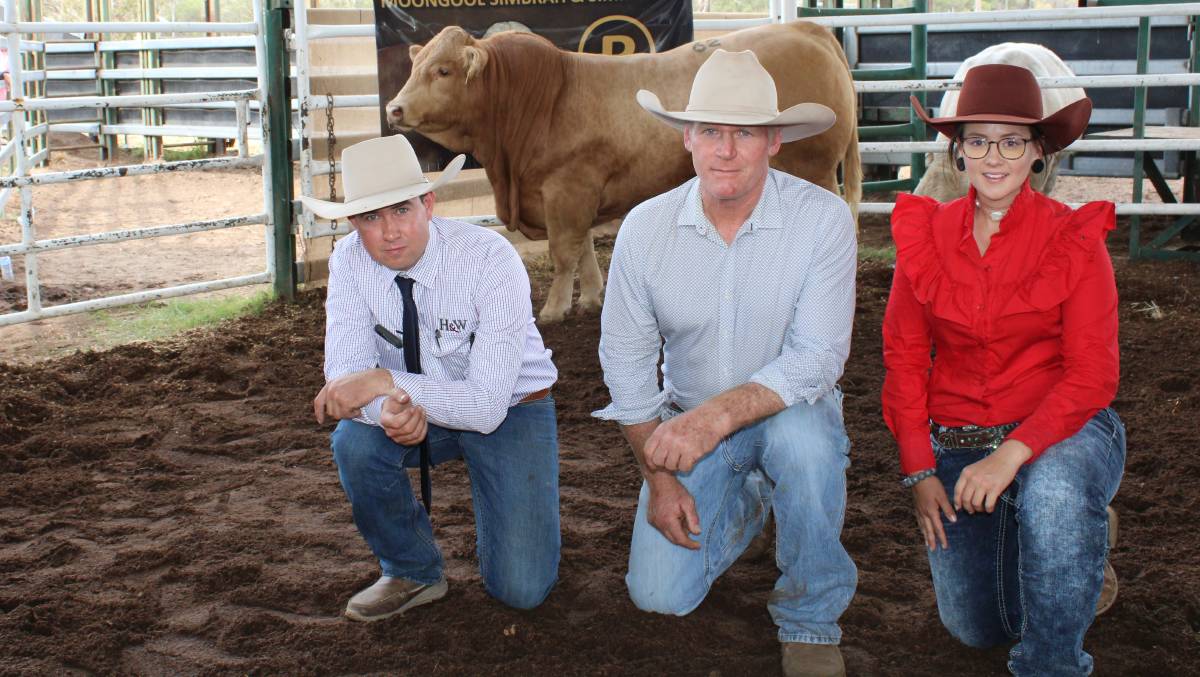 The Moongool selling barn was packed to capacity with many having to sit and stand outside.

Once the Charolais bulls sold those supporters and buyers willingly moved to accommodate a next wave of Simbrah buyers in order for them to operate.

In all, bulls sold to a vast buying spread from Casino to Cunnamulla to Clermont, Charters Towers, Richmond, Pentland, Nebo, Capella, and into and southern Queensland and ports in between.

Moongool MRQ551 is a proud bull with a sirey outlook he was selected by the Whitechurch family for his excellent muscle pattern, strong pedigree, and great depth.

Amy Whitechurch said they liked his thickness and skin type and breed character, with the added bonus of being a polled and red factor bull.

The Simbrah sale topper at $24,000 was Moongool MR R87 and is pictured with vendor Ivan Price, Mark Duthie of GDL, and the buyers Lyn and Rod Sperling, Rodlyn, Bell.

Next at $39,000 was Moongool MR Q515, a son of Waterford Lancelot L42e from a Silverstream Evolution E 168 daughter who sold to Glen Huntley, Kilburnie, Muckadilla.

Co-stud principal Ivan Price told the crowd it was the first time the family has offered Simbrahs and he was happy with what he had catalogued.

The Price family bought Gowrie Station near Charleville from Noel and Jill Mobbs in 2019 and the family also negotiated a deal to buy selected Gowrie Simbrah stud females which were joined to Gowrie bulls who have then calved down under the Moongool prefix.

The Simbrah sale topper was Moongool MR R87 representing all Gowrie bloodlines, and he was selected by Rod and Lyn Sperling, Rodlyn, Bell.

Mr and Mrs Sperling have been repeat buyers of the Gowrie bloodlines for many years and said they thought he was a real sire with extra length of body, tremendous breed character, strong bone and has a wonderfully quiet temperament.

"We will use him in our commercial herd, and maybe keep a couple of his sons," Mr Sperling said.

Overall, Ivan Price said it was a solid sale and the top priced Charolais bull was a stand out to him as he has a proven pedigree, great scans, sleek coat and sire appeal.

He too was happy with the overall result of the Simbrah bulls.

Selling agents were Nutrien, GDL, Hoch and Wilkinson, and Elders.