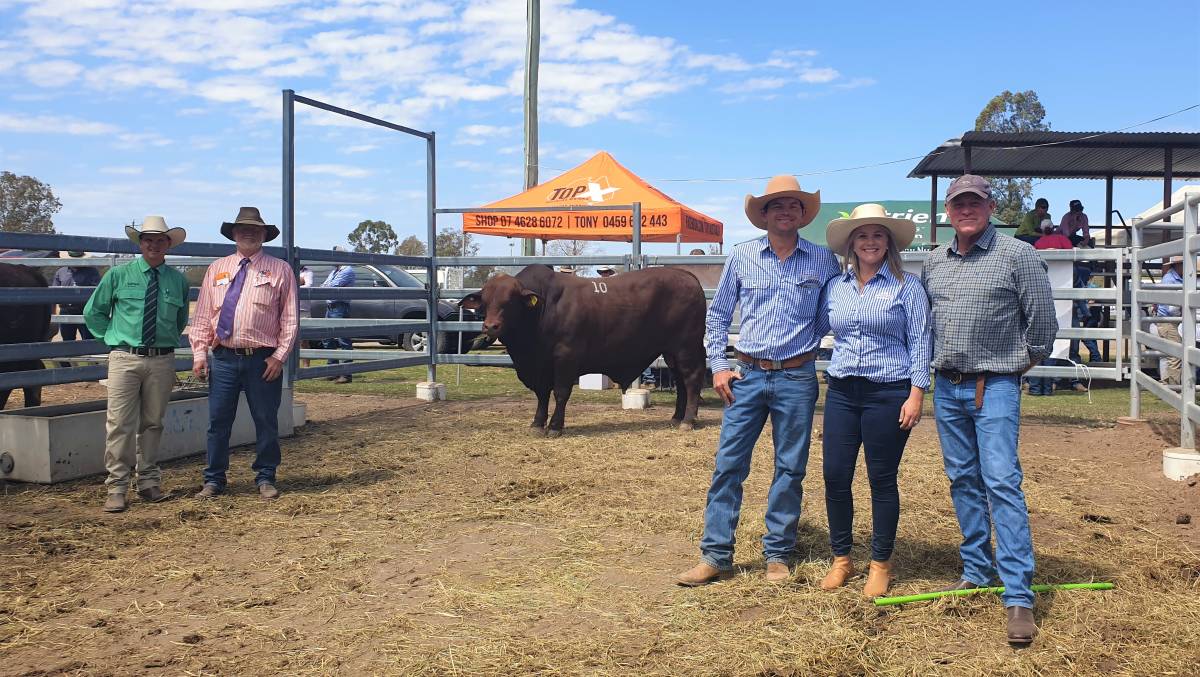 They market themselves as the number one stop for commercial cattlemen but it was stud breeders Scott and Wendy Ferguson, Glenn Oaks Stud at Nobby, who bought the top priced bull at the annual Wandoan Santa Gertrudis sale on Monday.

They market themselves as the number one stop for commercial cattlemen but it was stud breeders Scott and Wendy Ferguson, Glenn Oaks Stud at Nobby, who bought the top priced bull at the annual Wandoan Santa Gertrudis sale on Monday.

The seedstock breeders paid $23,000 for homozygous polled Annabranch Rambo R94 (PP), a result that vendors Luke and Carly Baker were ecstatic about.

"He's definitely the best bull we've bred and it's very nice to sell to another stud, especially someone so respected in the Santa Gertrudis breed," Mr Baker said.

Unlike his punchy namesake, the 24-month-old Rambo was the picture of docility in the sale ring, showing off his 884kg, his average daily weight gain of 1.18kg, and his eye muscle area of 144 square centimetres beautifully.

As well as intramuscular fat of 4.8 per cent, he had a scrotal circumference of 35cm and semen morphology of 90pc.

Mr Ferguson described Rambo as a standout bull with a certain quality about him.

"He's beautifully fronted - he stood out for style and character, and he's beautiful over the hips and loin," he said.

It's the first time Glenn Oaks have bought from the Annabranch stud, helping boost the stud's average to $12,333, a significant increase on the $7700 average last year, the first time they had taken part in the multi-vendor sale.

Also recording a $12,333 average were Alan and Jocelyn Nock's Red Mile stud, which sold three hefty commercial bulls at the end of the sale, reaching a top of $16,000 for a bull sired by Cardona Packer P37 (P), to Burunga P/L, Wandoan.

They were the sale's volume buyer, finishing with five prospective sires. 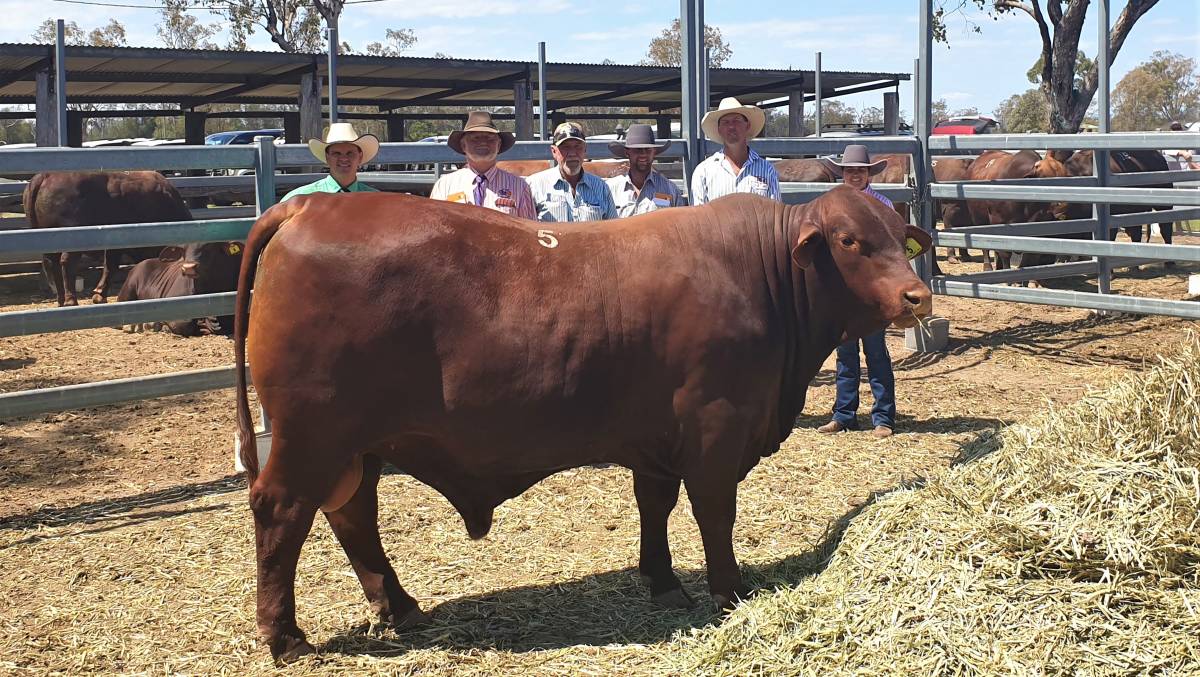 Nutrien's Patrick Weldon and TopX's Tony Pearce with David and Russell Anderson, Banana and Theodore, plus Jamally principals Jamie and Ali Becker and the second-top-priced bull.

He was the third bull into the ring for Jamie and Ali Becker's stud and the interest was immediate in the 23-month-old tipping the scales at 924kg.

As well as an average daily weight gain of 1.25kg, he had the impressive IMF score of 5.7pc, a scrotal circumference of 41cm and semen morphology of 83pc.

The Senepol breeders decided they would try bulls that would continue the flat back and red colour, plus they liked the length and depth of their top purchase, and his quiet nature.

"Russell saw the bulls in the paddock and said, this is the sale to come to," Mr Anderson said.

Jamie Becker, also the sale group president, said Jamally's average of $13,444 was their best, as was the top price, after a dozen years of selling at Wandoan.

"The top, by Bullamakinka N252, was a PP bull, and the best weight of our draft," he said.

"Today's been a great result for a group of young people having a go.

"We're really thankful for the local support - it's the backbone of our sale." 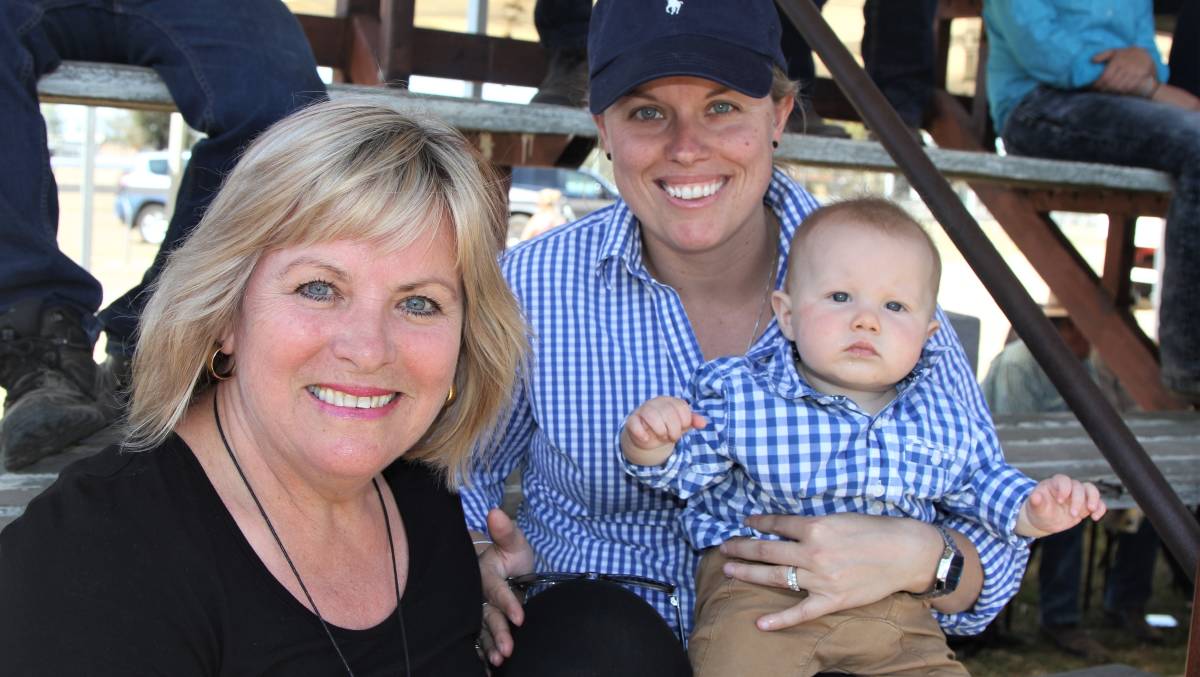 Trent and Krista Ciesiolka's Valley View Stud benefited greatly from that, topping their draft with a commercial bull, Valleyview Rowdy 1660, one of the five purchased by Burunga P/L for an average of $14,200.

Mr Ciesiolka said it had been good to see a few new buyers there along with regulars, which he felt indicated that with prices so high, people were looking around for value for money.

"We weren't expecting that price for our herd bull but his scans were good and it's a commercially oriented sale," he said.

The other volume buyer at the sale was Stonecroft, Taroom, finishing with four bulls.