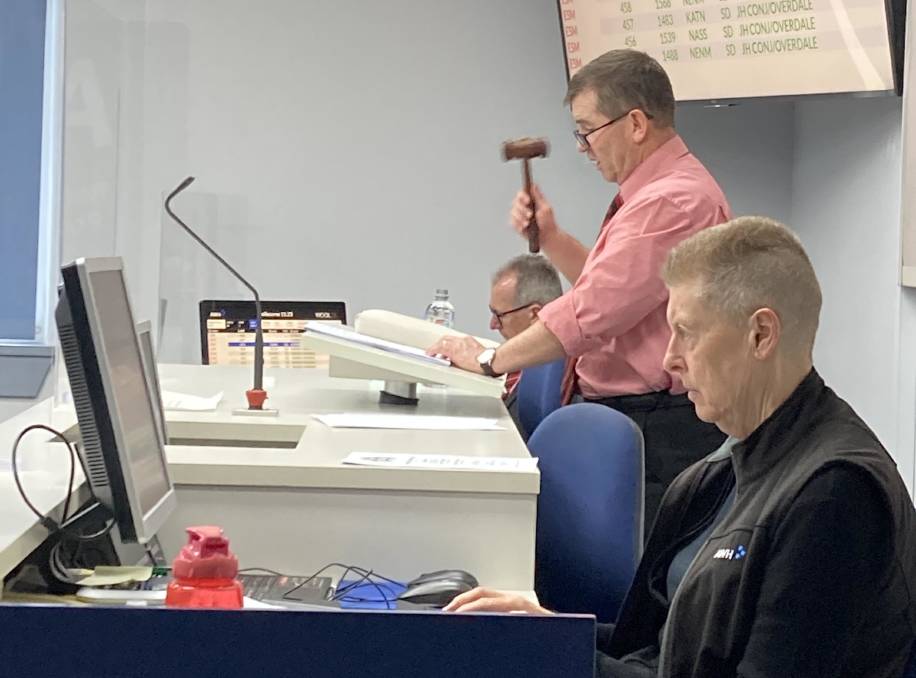 As wool prices fluctuate, there is a consistent premium of 10 per cent or more for finer types that are aligned to accreditation schemes.

Broker says attention is needed on reporting and quoting of accredited wools.

The Australian wool market continued its gyrations on either side last week.

As expected, there was a fall in prices on the first day and this was followed by somewhat of a recovery of values on the second day.

This culminated in an overall drop of nine cents a kilogram in the Australian Wool Exchange (AWEX) Eastern Market Indicator (EMI) in local currency terms.

Although, for the type of wool that most of them are chasing, quotes were probably higher across the week.

Buyers in Chinese currency had a similar price decline, and US Dollar prices slipped by 15c/kg - or 1.5 per cent.

As has been the case for the past few months, the better style Merino fleece wools were well supported at Australian auctions last week.

The poorer styles attracted the usual discounts, which was commensurate with the degree of difficulty in processing.

Skirtings and cardings followed a similar path, depending on processing capability.

Crossbred wool types continue to meander along, just keeping a head above water in terms of profitability.

But these are still desperately searching for an elusive "new demand" driver.

As expected, the AWEX 21 Micron Price Guide (MPG) in Melbourne came back into line - after being pushed up too high the previous week by a disproportionate volume of Responsible Wool Standard (RWS)-accredited wool selling at that auction centre.

The wool industry will no doubt be discussing how to handle the reporting and quoting of these wools, which are achieving a consistent premium of 10pc or more above the traditionally prepared and grown clips.

There are several accreditation schemes being promoted and used across the globe.

RWS and Global Organic Textile Standard (GOTS) are the two main ones that have managed to gain "street appeal" with retailers to date.

These are, therefore, generating the premium at auction - due to scarcity of supply.

Having a lump of these wools in the indicator - or not - does have flow-on effects to other parts of the industry and is something that needs to be managed.

Many traders went to great lengths last week to explain the price movements to their clients in China about the market in South Africa.

Its overall market increased on the first selling day, with a lot of "sustainable" wools in the catalogue.

On the second day, most traditional wools were still dearer.

But the headline market numbers fell due to a lesser volume of sustainable wools on offer.

In Australia, with a larger wool catalogue and a lower percentage - at this stage - of "sustainable-certified" wools, the effect is usually less noticeable.

That is unless you happen to be settling a futures contract against the 21-micron indicator when it spikes, as it did a week ago.

These are small issues, caused by a small industry no doubt.

If it was possible to increase the size of the wool industry, maybe some of these finicky things would not be a consideration.

But that would give us a lot more fibre to find demand for - and presents a greater challenge than what it does now.

Many people question how small the Merino industry can get before it becomes unsustainable, or inconsequential.

Other noble fibres roll along quite happily with a far smaller production base than Merino.

In comparison, cashmere production is estimated to be 25,000t across the globe.

Breaking it down further to what IWTO calls "luxury animal fibres", superfine Merino currently makes up 72pc of the total fibre consumption of 172,000t - with cashmere a clear number two at 15pc.

Clearly, in the case of superfine Merino, Australia still dominates the class.

Given this wool now accounts for less than 1pc of total world apparel use, it is probably time we ignored the bulk market and focused on where our strengths lie - in the luxury segment.

You don't see the cashmere or silk industry spending their marketing funds in the "dollar discount" stores.

So, finding more immediate demand for the luxury fibre - as well as that elusive new product - to stimulate crossbred demand hinges mostly on China.

European demand is rolling along nicely, with Italy leading the way and followed by Germany - once it decides who will replace Chancellor Angela Merkel. This is a big ask.

China, which still consumes more than 50pc of the final product, is experiencing a few issues that are giving consumers a reason to pause.

This is, in turn, giving retailers a few sleepless nights.

The production pipeline is backing-up marginally and cashflow concerns are being raised due to the stop-start nature of business flow.

The mid-autumn festival holidays on September 21 and 22 will give people a rest, and the opportunity to eat a lot of moon cakes.

But, from a retail point of view, China's national holidays in the first week of October are usually a much more active period.

Hopefully by then the weather is cooler across China, and this encourages consumers to buy a Merino sweater or new set of trendy thermals.

How the Chinese government responds to Evergrande, the large property developer that is barreling towards bankruptcy, will no doubt affect the psyche of many in China.

The sheer scale of the company - which has about 1.4 million apartments under construction, $300 billion in outstanding liabilities and is in a construction industry that accounts for about 25pc of China's GDP, means it is perhaps too big to fail.

But this is exactly the type of speculative capitalism that President Xi has been trying to dampen down - or highlight as morally wrong for the modern China.

With upcoming "elections" in early 2022, the president will want to keep things on an even keel - and not risk a housing price collapse.

Hopefully a solution is found quickly and the retail season for wool is upbeat and positive in this critical market.

Things should be okay for the longer-term plan of rising prices through from October until the New Year.

But it would pay to keep an eye on world events and, just in case, the futures market.

The story Broker questions how accredited wools fit into market reports and quotes first appeared on The Land.