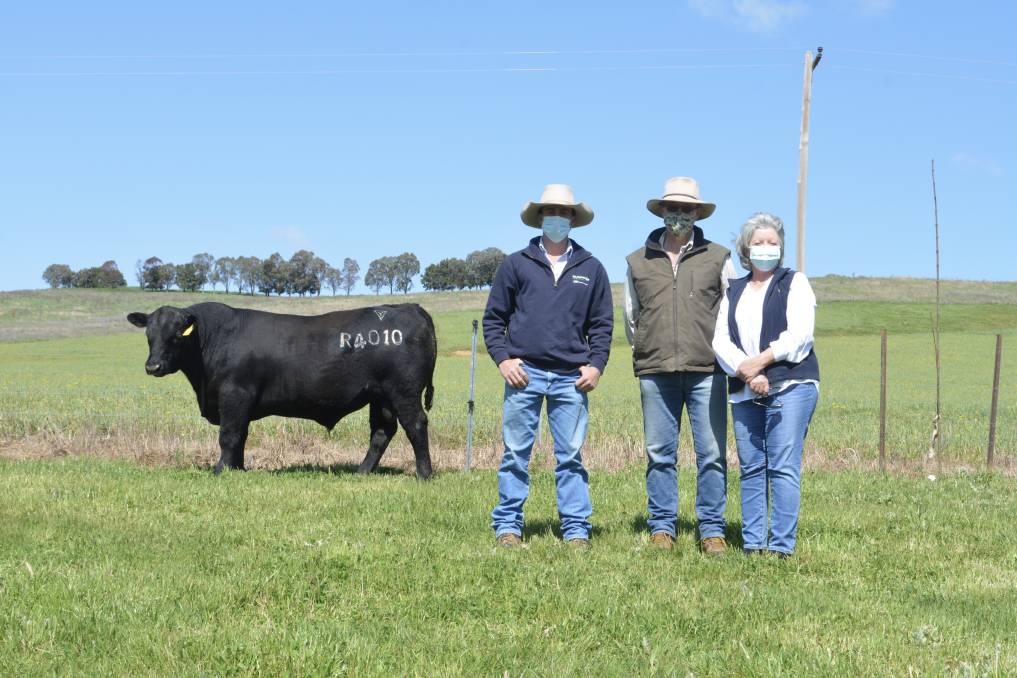 A BOUYANT beef industry and a super sire genetics drove the top price to $130,000 at the 2021 Lawson Angus Victoria and NSW combined yearling spring sale.

Top was an AI son of elite sire, GAR Momentum, Lawsons Rocky R4010, which was bought by a syndicate of northern NSW breeders and a local Yea breeder - Gilmandyke, Dunoon, Kelly and Knowla Angus for the bull that was part of the NSW offering.

There were 65 registered buyers online and 145 viewed online and 24 registered on site for the sale that was conducted at the Yea and Boorowa properties as a physical sale conducted by DLS and interfaced online via Elite Livestock Auctions.

"There was not a big crowd in attendance due to COVID but there was a large number viewing and competing online," he said.

"Lot 80 had lot of inquiry from stud industry as a potential sire and that helped create an Austrlalian record for a yearling bull," he said.

Given all yearling bulls the Lawson family were happy with the total clearance and sale result.

Second top price of the day was $16,000 for lot seven, Lawsons Get Cracking R5100, a son of Alloura Get Cracking G10, with an IMF of +4.1 and EMD of +10.6. The June 2020-drop bull was bought by Ridgemount Pastoral, Glen Innes, NSW. The bull appealed because of its high marbling and balance of traits.

Volume buyer of the day was account TRT Pastoral, King Island, Tasmania, which bought 15 bulls. The account spent to $12,000 on two occasions, the first being lot 26, Lawsons Genuine R1077, one of 12 sons of outcross sire, GAR Genuine, and ranked top 5pc of the breed for GRN at 172.

The Mason family, Meadow Flat, NSW, was an active buyer securing 10 bulls and paying to a top of $13,000. The top lot was lot eight Lawsons Reliant R5167 by GAR Reliant and ranked in the top 5 per cent of the breed for GRN, top 10pc for 600-day growth and top 7pc of the breed for Calving Ease Direct (DIR).

Other buyers included Linton Park Pastoral, Ballarat, a long-time client who bought five bulls to a top of $13,000.

The story Lawson tops $130,000 for a Momentum son first appeared on Stock & Land.