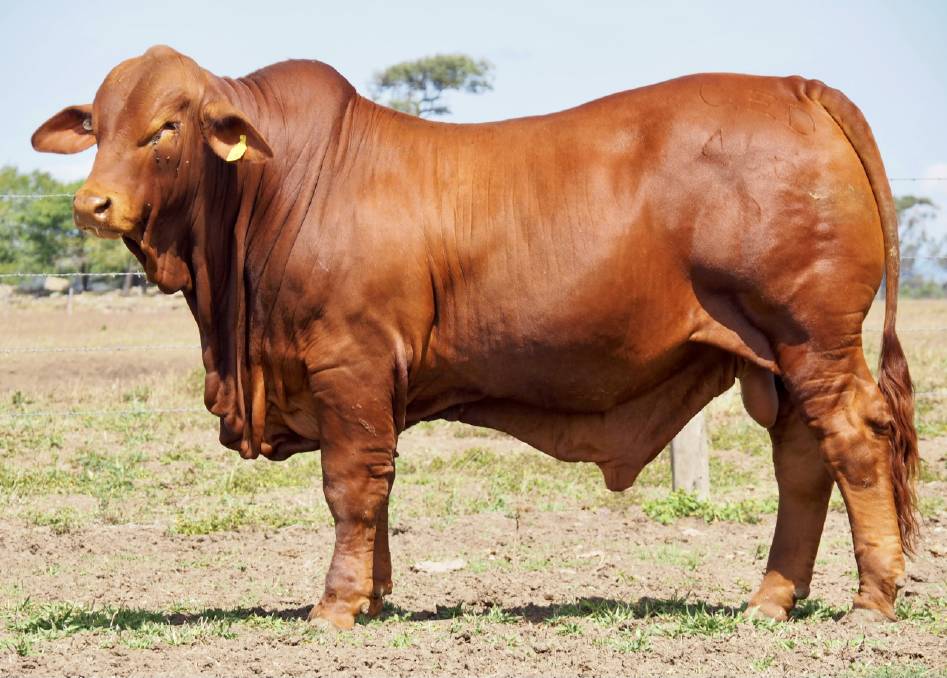 Oasis A Cowboy sold for $100,000 in a private paddock sale. Photo: Supplied

The bull sold with a full guarantee for a notable $100,000 out of the paddock on Monday.

Rockhampton's Adam and Shelley Geddes had big plans for Oasis A Cowboy at the Droughtmaster National but were dealt a rough hand when their lead bull was struck down with three-day in the final hours before he was due to leave for the sale.

Despite contracting the sickness, the bull still sold with a full guarantee for a notable $100,000 out of the paddock on Monday to Peter Carrington of Rondel Droughtmasters, Winton.

Mr Geddes said although he was disappointed the bull didn't make it to the sale, he was pleased with the end result.

"Anyway, these things happen, and it worked out alright in the end."

Saying he expected the bull to go for much less considering the sickness, Geddes was glad his condition wasn't more diminished.

"He didn't go down with three-day properly, he was up and down," he said

"But he just wasn't eating properly for a few days and was a bit sore.

"But now he's good as gold, and he's on his way to Winton now actually, they've picked him up and he's on the way to his new home."

Rondel's Luke Carrington said the family had their eyes on the bull before the sale and they were happy with the purchase.

"We were pretty lucky, I think you would have had to pay a lot more than what we got him for in the paddock, but we really wanted him," he said.

"He's got an unreal sheath on him, sire appeal, skin and bone, and he's a PP bull."

It was the bull's overall balance, structural correctness and softness that appealed to the Carringtons.

"They're hard to find, bulls like that, and he ticked all the boxes," Mr Carrington said.

The family plans to start an artificial insemination and IVF program with Cowboy once he's rested and fully recovered.

A half-sister and mother of the $160,000 Rondel Whiskey were already on the joining list.

"When he gets home we'll give him a bit of time to get over that three-day, and hopefully we'll collect him when he comes good," Mr Carrington said.

"We'll run AI and do an IVF program with him over a couple of really good cows."

Rondel didn't have to wait long to earn the expenditure back after averaging $23,944 for their nine bulls on day two and selling Rondel All Star for $100,000 to the Power family, Lazy A stud, Julia Creek.