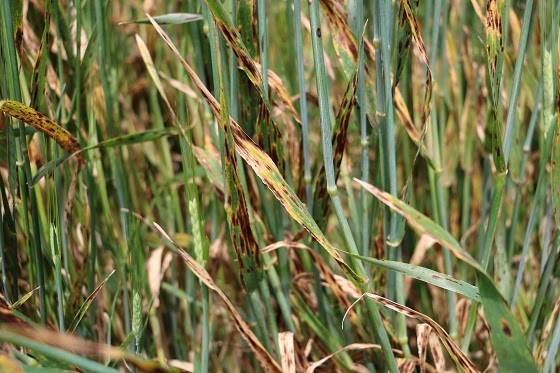 DEVASTATING: Septoria tritici blight can cause significant damage in wheat.

The wet winter has been good for cropping prospects, but it is not all positive, the moist conditions are also ideal for a fungal disease.

A wet winter in southern Australia has seen an increase in the prevalence of one of the region's most significant wheat disease, Septoria Tritici Blotch (STB).

The foliar fungal and stubble borne disease can cause yield losses of up to 60 per cent in susceptible wheat varieties and is particularly problematic in cool, wet seasons.

Significant winter rainfall and forecasts for a wet spring have made it important for growers to monitor paddocks and consider management options for STB this season.

STB has become an increasingly big problem in recent years, primarily due to continuous cropping systems, which mean disease inoculum is left in the soil.

With the disease prevalent again this year many growers have already started fungicide applications as part of integrated disease management strategies.

GRDC crop protection manager - south, Ruth Peek, said STB is a major disease of wheat, particularly in the high and medium rainfall zones of the southern region, and can be costly to manage particularly in a season like this one.

"The incidents and distribution of STB have increased in recent years, largely due to intensive farming practices, which have led to a build-up of inoculum," Ms Peek said.

She said the GRDC was committed to finding ways to help farmers manage the STB problem.

"In the southern region in 2019, GRDC's national grower network listed STB as the most important crop disease for wheat, which reflects the high level of industry concern," she said.

"The other challenge is that we know the STB pathogen has the potential to rapidly evolve and develop fungicide resistance or insensitivity in its populations."

The first is a three-year project, which will investigate the epidemiology of STB in low and medium rainfall zones to better inform integrated disease management strategies.

The research will be led by Grant Hollaway from Agriculture Victoria and his colleague Hari Dadu, in collaboration with Tara Garrard from South Australia Research and Development Institute (SARDI).

Trials as part of this project will be conducted in Victoria by Agriculture Victoria and Birchip Cropping Group at Horsham, Hamilton, Watchupga and Longernong.

Trial work will be conducted at Gnarwarre in Victoria, Millicent in South Australia and Hagley in Tasmania over the next two years.

"The adoption of integrated disease management for STB in the high rainfall zone will hopefully reduce regional inoculum levels, in turn reducing the amount of fungicide being used in the region and therefore the risk of resistance developing," she said.