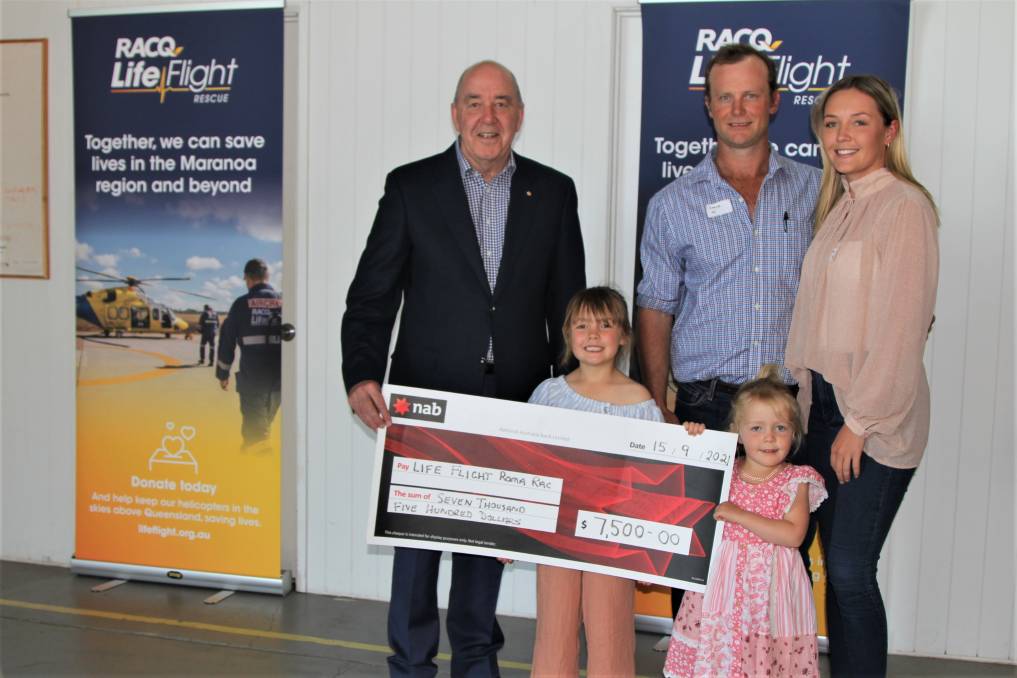 The service came to Roma as a contractual arrangement with the Surat Gas Aeromedical Service, to ensure 24/7 emergency aero-medical cover, and upgraded from a Bell 412 chopper in 2018 to a $20m state-of-the-art AW139 helicopter.

However, it doesn't fit in the current hangar.

As base manager Bryce Duke said, the potential for 'hangar rash' - contact between blades, tails, wings - was significant and meant the grounding of the aircraft if it happened.

"To fit both the helicopter and King Air in the RFDS hangar, our blades on the helicopter have to be in a specific orientation to allow for the RFDS plane to slot their tail between the blades," he said. "You can imagine, 2 o'clock, 3 o'clock in the morning after these guys have been out flying six, seven or even longer hours - everyone's fatigued."

It's why the organisation is advocating for a new purpose-built hangar and why a funding boost was made by the Tooloombilla Rodeo and Campdraft Association last week.

The Mitchell group, which has been staging two events a year since 1973 and donating profits to the Royal Flying Doctor Service and ambulance services in Injune and Mitchell, donated $7500 for the emerging aero-medical cause.

The presentation took place at a sunset drinks function at the current hangar at the Roma airport, with the group's sizeable helicopter resting on the tarmac outside. Tooloombilla Rodeo president George Hill said they were glad to have the opportunity to support another project that was proving invaluable to the region.

"We all dread the day when someone in our family has an emergency and this project will help make the LifeFlight helicopter respond as fast as possible when it's most needed," he said. "On behalf of the campdraft association I'm proud to present this cheque of $7500."

LifeFlight Australia chairman Rob Borbidge acknowledged the generous support, adding that they were hoping for good news from the federal government's Building Better Regions funding round in October to give the project a funding stimulus.

He also acknowledged the support of Maranoa councillors for a number of options they'd explored.

"Part of the SGAS arrangement is that (the service) is also available for community call-outs," he said. "About 75pc of its work is actually servicing the community, so that shows the demand is there."

The Groat family north of Roma is one that knows minutes matter, when their son Max walked into a fire pit that had been put out but was still very hot, in May 2019.

The two-year-old had fourth degree burns with skin and blood coming away from both feet.

As relayed to the audience last week, they called the ambulance and stayed with running water until it arrived an hour later.

The officers then called for a LifeFlight helicopter as it appeared he was in danger of losing his toes without intervention.

When it arrived 45 minutes later, doctors quickly assessed and administered additional pain medication before flying Max and his mother to Roma Hospital.

"I'm very proud of what the service can achieve,"Mr Borbidge said.

"We complement the RFDS because there are areas that a helicopter can go to that an RFDS fixed wing can't get to, so we work in very closely, not just here in Roma but right across the state."

The service in Roma is 10 years old. Last year, Roma and Toowoomba services between them undertook some 760 missions servicing south west Queensland.

Building a hangar in Roma that met the operational standards required would boost LifeFlight's capacity in many ways, including growing the aircraft fleet, providing a dedicated administration space for crew, doctors and paramedics, and would provide spaces for medical storage, training, and engineering and mechanical needs.

Onsite maintenance facilities will ensure aircraft are online and available for rescue service more often, Mr Borbidge said, and would decrease the amount spent in costly aircraft downtime due to the current need for offsite aircraft maintenance.

There would potentially be on-site accommodation for shift crews as well.

Anyone with questions, or who wishes to make a donation to go toward the build can contact LifeFlight at maranoa@lifeflight.org.au

The group is working towards a cattle sale fundraiser at the last Roma sale for the year, on December 14.

TopX is coordinating it along with Kate and John Scott, who are calling for any interested producers to contact them or Sarah Packer.

Either a beast or a pen of five cattle would be welcome.