A top price of $20,000 was achieved on three occasions at the 10th annual Western Downs Santa Gertrudis bull sale held at the Dalby Saleyards on Friday. 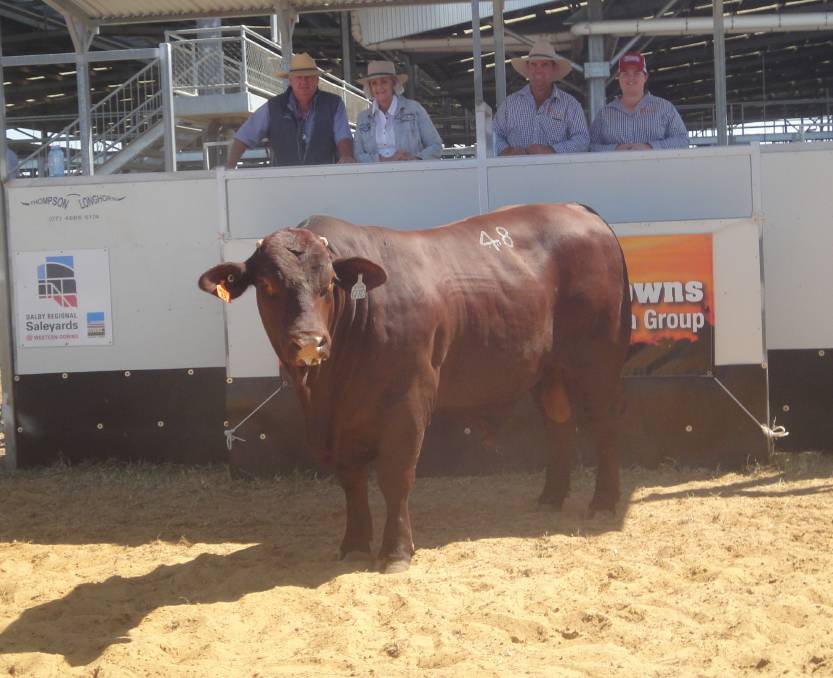 A top price of $20,000 was achieved on three occasions at the Western Downs Santa Gertrudis sale held at the Dalby Saleyards including Hayleigh Q70 (PS). He was bought by John Robbins and Jan Clark of Daandine Pastoral Co, Taroom and sold by Ross Wilson and family and pictured with his daughter Sara, Hayleigh Santa Gertrudis Stud, Durong.

A top price of $20,000 was achieved on three occasions at the 5th annual Western Downs Santa Gertrudis bull sale held at the Dalby Saleyards on Friday.

The sale result left all the sale vendors smiling as the sale average increased this year by $4000/bull.

Jan Clark and John Robbins of Daandine Pastoral Co, Gwambegwine, Taroom, not only paid a top price of $20,000 but were one the volume buyers finishing with seven bulls to average $13,570.

Jan Clark said Daandine Pastoral had been supporting the Western Downs Group since their first sale and she thought based on the current sale results she was happy with what she had to pay and thought she bought well on the day.

"John and I selected some bulls for heifer joining, while the other bulls will go straight into the main cow herd," Ms Clark said.

Daandine Pastoral's number one priority is temperament, followed by visual, and figures play a big part in the selection process as well.

Daandine will join 1500 Santa Gertrudis breeders, some infused with Droughtmaster genetics, with the progeny targeting the feeder market.

The Dunlops finished with Burramurra 400 (P) offered by Mark Baisley, Burramurra Santa Gertrudis Stud, which is located near Mathoura, in the southern Riverina region of NSW.

Burramurra 400 (P) is an early maturing thick set bull and it was the last son of the ever reliable sire Kuloomba Bro to be offered for sale.

The Burramurra Stud made the long haul to Dalby worthwhile as they sold four bulls to average $13,250.

He was selected by Shane Hamlyn who was buying through Elite Livestock Auctions with Tony Lilburn, GDL, Quilpie, doing the bidding.

Mr Hamlyn also finished with 7 bulls to average $11,142 to use in his breeding herd at Wanko, in the Quilpie district.

Mrs Shaw, who is also president of the Western Downs Santa Gertrudis Group, said there were some very happy vendors.

"It was a top result, and to see the bulls sell from Beaudesert to Bourke and out to Quilpie and throughout southern Queensland was great," she said.