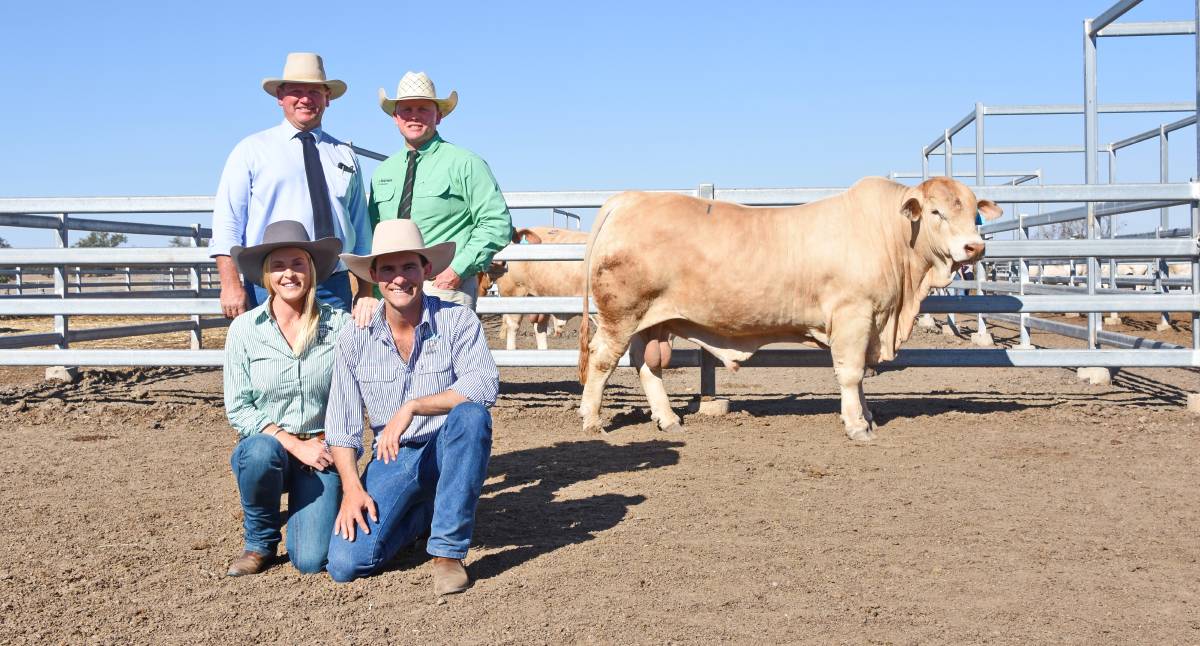 Welsh family clears 55 bulls for a $9781 average at their on-property sale.

There were buyers from every corner of the state in attendance, but it was local producers Bryce and Lucy Moore that pushed the Huntington Charbray bull sale to a top of $30,000 at Taroom on Wednesday.

It was a one and done affair for the Trifecta Charbrays stud principals, who were set on taking home the first lot of the sale.

The 22-month-old Huntington Quantico (P) (C4) drew their attention for his all round completeness.

"His temperament is impeccable, which is a big focus for us," Mr Moore said.

"Beautiful soft bull, long, and tidy underneath. He's got a good sirey head, good bone, good nuts, all his scans were very good, and we feel he'll offer a lot to our herd."

"We're trying to breed that nice honey colour so we've got a line of cows a similar colour to that to keep that consistency in the coat," Mrs Moore said.

"And he carries his weight really well, has that natural doability, and moves freely."

Sired by Huntington Goodman (P) (F1) and out of Huntington Princess N225 (P) (C5), the cream-coloured sire prospect tipped the scales at 860 kilograms and measured 41 centimetres in the scrotum.

He scanned 141 square centimetres for eye muscle area, 13mm and 11mm, respectively, for P8 and rib fats, and 5.6 for intramuscular fat percentage.

Quantico left the sale ring and a buzz in the air in his wake, and made way for the next lot, in Huntington Quade (P) (C6), to achieve the second-top price of $26,000.

Knocked down to the Davidson family, Roper Downs, Middlemount, the 25-month-old was sired by Acton Lyn Braydon L61 (P) (C5) and out of Huntington MME Berard J287 (C6).

The demand was clear from the very beginning of the sale, with the first six lots averaging $19,667 and the first 12 selling for an average of $15,667.

That increased clearance was helped along by several volume buyers, as well as repeat clients who had been missing in previous years due to the dry.

Felspar Grazing, Charters Towers, put together the biggest draft, selecting 12 for an average of $8083, while Johnson Pastoral, Mt Pleasant, Hughenden, purchased seven for a $7428 average, and Steve Burnett, Burnett Group, Monteagle, Clermont, successfully bid on five via Elite Livestock Auctions for a $6600 average.

It's a result the Welsh family was extremely happy with, stud principal Matt Welsh said.

"The cattle market is great and there's been some great results around, but we market into some areas that did it extremely tough over a few years and for them to come and show the confidence in our cattle like they did, we're really happy," he said.

"It certainly gives us plenty of confidence going forward, and the number of repeat clients is a big positive for us.

"This year for us to grow, we've got to break some new ground and bring in some new clients, which we have and it's a great thing."