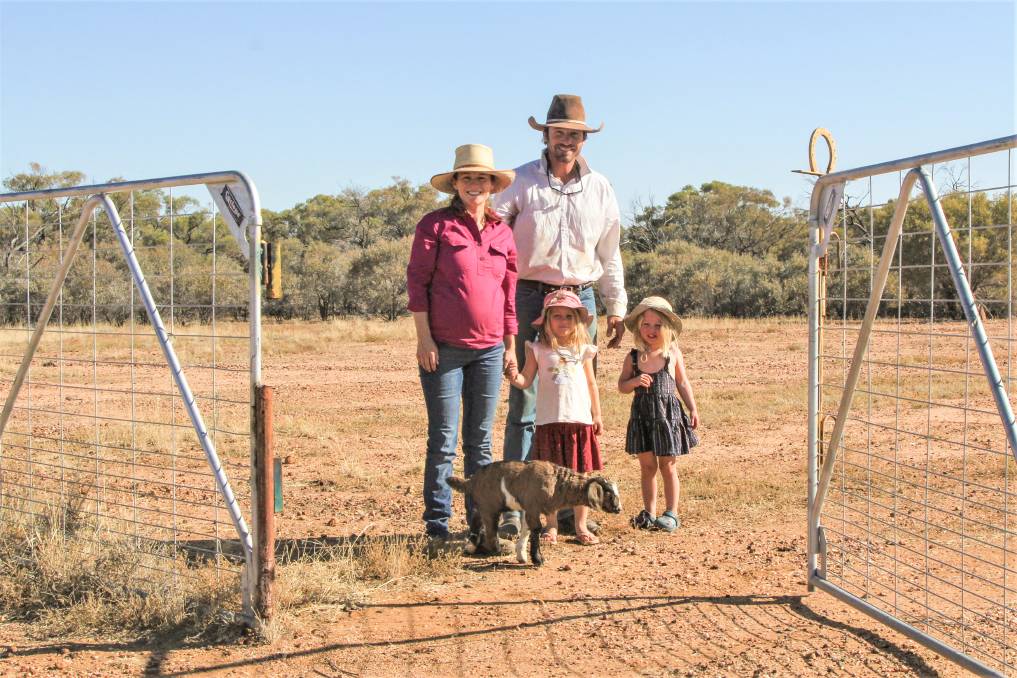 Rob and Sophie Francis and their children Thea and Grace, plus pet goat Spot, at the entrance to their exclusion fenced property, which has opened the gateway to new production opportunities. Photo: Sally Gall

An exclusion fencing loan scheme has been the enabler for Longreach's Rob and Sophie Francis as they work their way back from a debilitating drought that shut down their plans for years.

An exclusion fencing loan scheme has been the enabler for Queensland's Rob and Sophie Francis as they work their way back from a debilitating drought that shut down their plans for years.

The couple were part of a family partnership that purchased Tocal Station 90 kilometres south west of Longreach in 2012, just as the latest drought was beginning to set in.

They had to stick with their jobs contract mustering and as a pharmacist in Mount Isa as the property was systematically destocked when the wet season failed the following summer, until there was no stock left by August 2013, and 'held tight' until the winter rain of 2016.

They put some cattle back on the 23,070ha property and made the most of agistment opportunities thanks to Thomson River flood-out country and 3235ha of mulga, but the Longreach Wild Dog Exclusion Fencing Scheme loan allowed them to consider restocking with other options.

"[The fence], it's been a godsend, we wouldn't be here in the capacity we are unless we'd gone into the goats and sheep," Mr Francis said.

Tocal Station sits in a more marginal sector of the Longreach Regional Council area, having a 250-300mm average rainfall, but Rob and Sophie Francis are confident that Aussie White sheep and rangeland goats are suited to the land type.

"It's opportunist country with cattle but the way I look at it, sheep and goats are your meat and potatoes," Mr Francis said. 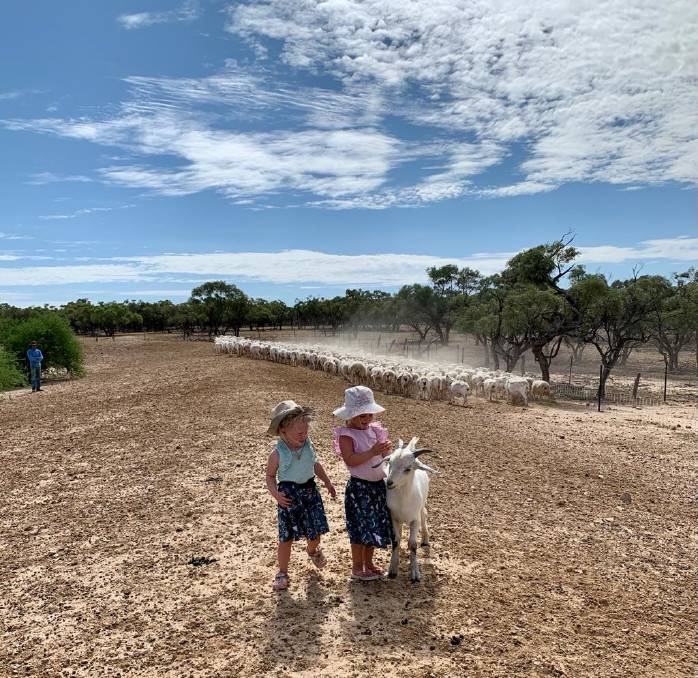 Thea and Grace Francis, who have had lots of pet goats since the family began stocking them, out inspecting an Aussie White mob on Tocal with their parents. Photo supplied.

Knowing that a fence had to be the first step to running small animals, they've fenced nearly 12,140ha of the property's timbered gidyea and mulga land types, and are in the process of doing the same for 6475ha of their river and downs country.

The decision to buy the first Aussie White/Dorper-cross mob in 2018 was based on watching the success near neighbours Cam and Jenny Lindsay were having with the breed, and because they see lots of similarities between cattle, which they know, and meat sheep.

"There was a bit of hype behind them back then, it hadn't really come to fruition but we just took a punt," Mr Francis said. "We're organic so we're looking for more of a niche thing, and the Aussie Whites ticked a few more boxes."

While it was a big investment at the time, Aussie White sheep are fetching a premium in the market and Mr Francis said it was good to be part of a market that was 'hot'.

One of their recent AuctionsPlus sales of four-month-old ewe lambs netted them $333 a head, paid by a NSW restocker.

They started off selling fat lambs at eight months but have switched to the store lamb market for the time being.

"That was always our plan, just because you haven't got to hold onto the progeny for an extra three or four months, and they're worth comparatively not a lot less as a store lamb," Mr Francis said. "And it's just a lot easier for us."

It also means their ewes have a few months to freshen up before they're joined again.

Alongside them are a flock of rangeland goats, which the Francises have joined with Boer billies to increase their weight.

"They're definitely early maturing and a bit heavier but I don't think you can go past the survivability of the feral nannies," Mr Francis said. "As long as you're not overstocked and getting plenty of milk, the ferals are a pretty good goat, and it seems to be what the market wants."

They've set their fencing up to trap all their stock on the dams on the property rather than in the timber.

Western Meat Exporters at Charleville is where their progeny are sent.

They say the beauty of goats is their tradeability.

"Having the sheep and the goats has made all the difference here," Mr Francis said.