The level of repeat buyer clientele at this year's Hopgood Charolais bull sale was a testament to the hard work and dedication of Moonie seedstock producers Mark and Susan Hopgood.

The sale at Clermont last Thursday generated strong buying interest from many Queensland producers looking to improve their bottom line through the quality Charolais genetics.

It was 25-month-old Hopgood Quiver who appeared valiantly before the stand, drawing the attention of Greg and Jill Peck, repeat buyers from Purtora, Blackall.

The smooth, well rounded polled bull topped the sale at $21,000, cracking the stud's previous record top price which had coincidentally been set by the Pecks last year with a $20,000 purchase.

Sired by Palgrove Hallmark (P) and out of Hopgood Kimberley 41-H48E, Quiver weighed in at 761 kilograms, with an eye muscle area of 143 square centimetres, P8 and rib fat of 10mm and 6mm respectively, intramuscular fat of 4.3pc and a scrotal circumference of 38cm.

Despite what the name suggests, there was no question in the Pecks' minds when they decided to snatch up the second-top priced bull, 24-month-old Hopgood Question for $19,000.

Sired by Palgrove Kingdom (P) and out of Hopgood Bronwin 40-J81E, the polled bull tipped the scales at 825kg, with an EMA of 136sq cm, P8 and rib fat of 10mm and 8mm respectively, IMF of 5pc and scrotal circumference of 40cm. 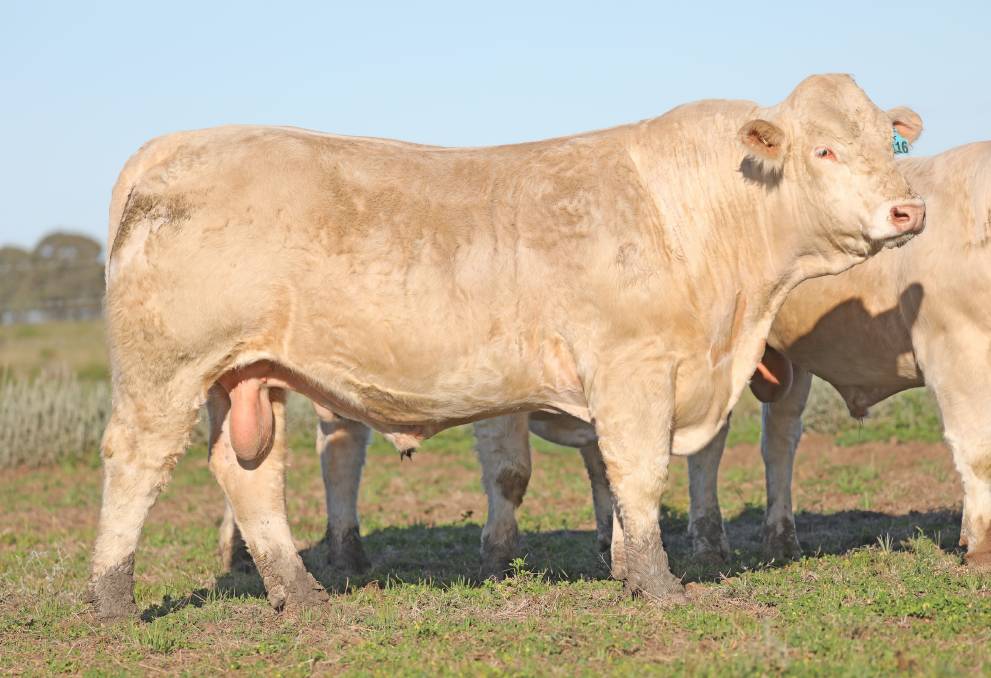 Second-top priced bull Hopgood Question was purchased by Greg and Jill Peck from Blackall for $19,000.

The Pecks own and operate a commercial cattle breeding enterprise on Purtora, a 14,300 hectare property east of Blackall, which is run in conjunction with another block at Surat where they send steers to reach feeder weight.

Mrs Peck said part of their selection process is based heavily upon bulls having the polled genetics with a good temperament and proven fertility.

"We try to keep a three way cross in our herd, so the Charolais bulls will go over our Santa Gertrudis cows, and then the heifers from those will be joined to an Angus bull for their first calf. We want the Brahman content for the bad times, and the European content for the softness fertility and weight.

"We do it to get the hybrid vigor, and to cater to the market. We try to breed for what people want. "

Happy with the selection of bulls purchased this year, Mr Peck said they'll soon return home to be joined with a mob of some of their best drafted heifers.

"The Hopgoods have produced good quality cattle and we'll continue to support them," Mr Peck said.

"Mark has been really good, he came out to see us last week to check how the bulls we purchased last year had performed.

"It's really good when the person who sells you bulls wants to make sure they're doing the right thing. Great after-sale service."

Mr Hopgood expressed extreme gratitude toward his return clients for their continued support, and was thankful to all new clients for expressing an interest in his bulls.

"Nearly 95pc of the people who came to the sale this year were repeat clients. The cattle do well for them so they just keep coming back.

"Our EMAs are higher, our fat covers are even, IMF could be some of the highest in the breed and I think the doing ability and constitution of the cattle we've got are really coming through for our clients."

Mr Hopgood was more than satisfied with the overall result, and looks forward to checking in with clients to see how his bulls are performing going forward.

"I like getting around and seeing what they're doing with their cattle, and I think it's a great result as a seedstock producer to go and actually see what you're producing genetic wise for the evolution of where the industry is going," he said.

"I like to have that personal connection and rapport with people, so if there's a concern with anything I remain open and approachable so they know they can ring and talk to me about it.

"I think that's more sustainable for a business, but also for a reputation. I stand by my product and want to make sure it's right for people."