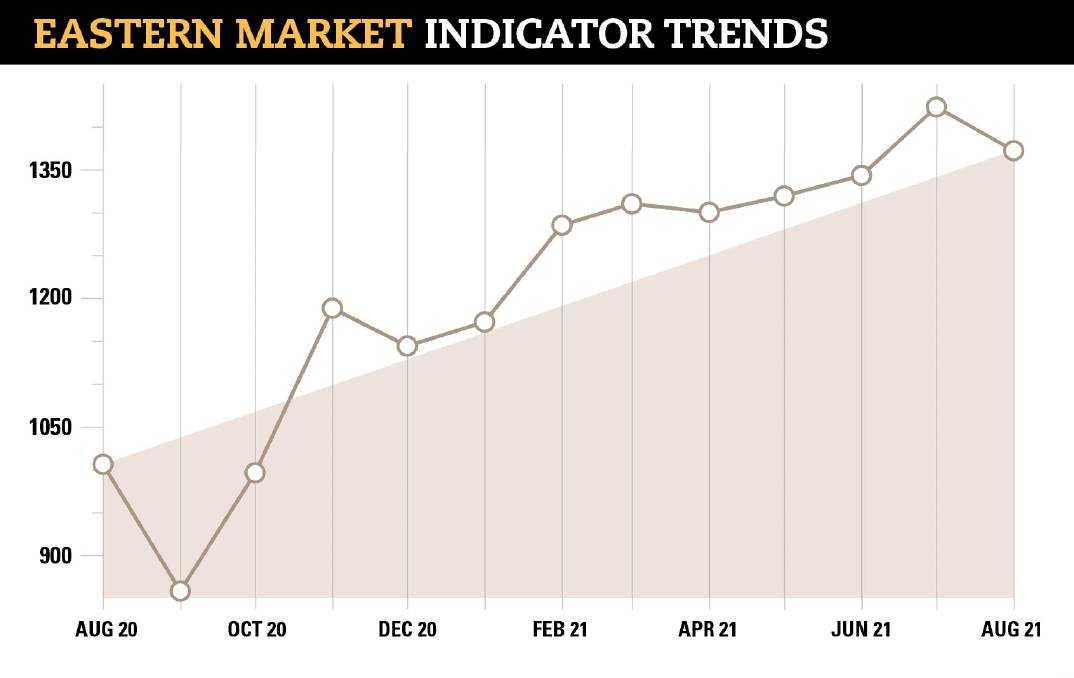 The Eastern Market Indicator has been on the rise in 2021, but experts don't believe it's a supercycle.

While wool prices are up, there's not enough evidence for long-term market boom, analysts say.

As commodity prices boom across the globe, Australia's wool sector is seeing a rise but brokers and analysts remain cautious about predicting a supercycle.

Rabobank wool analyst Dennis Voznesenski said that commodity supercycles tend to last for longer time periods between five to 10 years and he didn't believe the factors currently supporting the wool industry would play out long term.

"We went into COVID, there was massive demand disruption ... now we're coming out of COVID, people are either getting vaccinated or their government has COVID under control and they have money saved up and they are starting to spend it," he said.

"When you think about supercycles, I really think about factors that would cause a fundamental shift in the industry and change demand for five to 10 years."

Mr Voznesenski said wool prices were being influenced by factors such as government stimulus payments in places such as the USA and Europe, increased consumer spending and the growing interest in sustainable fibres.

"If you look at retail apparel sales in some countries like the USA and China until recently, they were even higher in the last couple of months than pre-pandemic but you have got to ask the question of how long can this last?"

"People aren't going to be spending 20 per cent more than they always did forever... what's happening now is more of a 12 to 18 month recovery and then we're back to a couple of factors that are structurally causing lower demand for wool if we look at the five to 10 year horizon."

Mr Voznesenski said factors that caused lower demand for wool included ageing populations and the casualisation of the workforce but the drive towards sustainability could offset those issues.

"Currently in the USA and Europe there's a really big drive to reduce greenhouse gas emissions and make their economies more environmentally sustainable," he said.

"In Europe and the US there's a drive for biofuels... and that's causing prices for canola to go up.

"If we take that kind of angle and we say, 'what if in the wool industry we can prove that wool, because it's a natural fibre, it's biodegradable and maybe there's a smaller carbon footprint in the production of wool apparel than in synthetic, that could be something [that could increase demand]."

"Our biggest Achilles heel is that we are very dependent on one major customer, which is China," he said.

"The supercycle is probably a little way off for us but wool is certainly coming back into vogue in terms of its environmental credentials as the world starts to be very acutely aware of climate change and people wearing the right things. I think wool is heading down the road for better times."

Mr Woods said looking at historical wool market trends, the boom of 2018 was probably cyclically due and came at a time when production was low.

"We're still in that low production cycle but it's now in a recovery mode and we don't have anywhere near the sheep numbers we've had in previous booms of the wool market, and I refer to 1951 and again at the end of the 1980s," he said.

Mr Woods said while it was hard to know how long the COVID-19 situation would hamper the industry, the supply and demand equation meant the wool market was on a firm footing for good times ahead.

"Whether they will be as good as they were in 2018, I'm not probably game to make that call but it's highly possible given the relatively low volume we produce," he said.

Waiting on a retail surge

Don Macdonald of Dubbo-based Macdonald and Co Woolbrokers said the drop in wool prices following the recess was mostly to do with disruption to logistics due to COVID lockdowns.

"The signs were there prior to the recess that a fairly sharp recovery was in the pipeline and that apparel would follow similar trends that we've seen in other commodities as people get back out circulating and socialising," he said.

"A growing sector is athleisure and that's been one of the bright points for wool during lockdown as next to skin garments, casual wear's a growing sector but you can't escape the fact that the big volumes of wool go into formal wear and people haven't been out circulating, dressing up.

"When that happens, as it's beginning to happen, it's a very positive trend for wool."

"Already there are figures coming out of major retailers in Northern Hemisphere markets that are showing this sign," he said.

"There's a backlog of stock and some of that stock is actually made up apparel and as you come down the pipeline, there is obviously some accumulated stock.

"The first surge of retail spending is going to absorb a lot of the stock that's in the pipeline. The second surge is what really will take the fresh wool to a newer, higher level."

The story Wool sector on the rise, but supercycle predictions may not spin out first appeared on Farm Online.