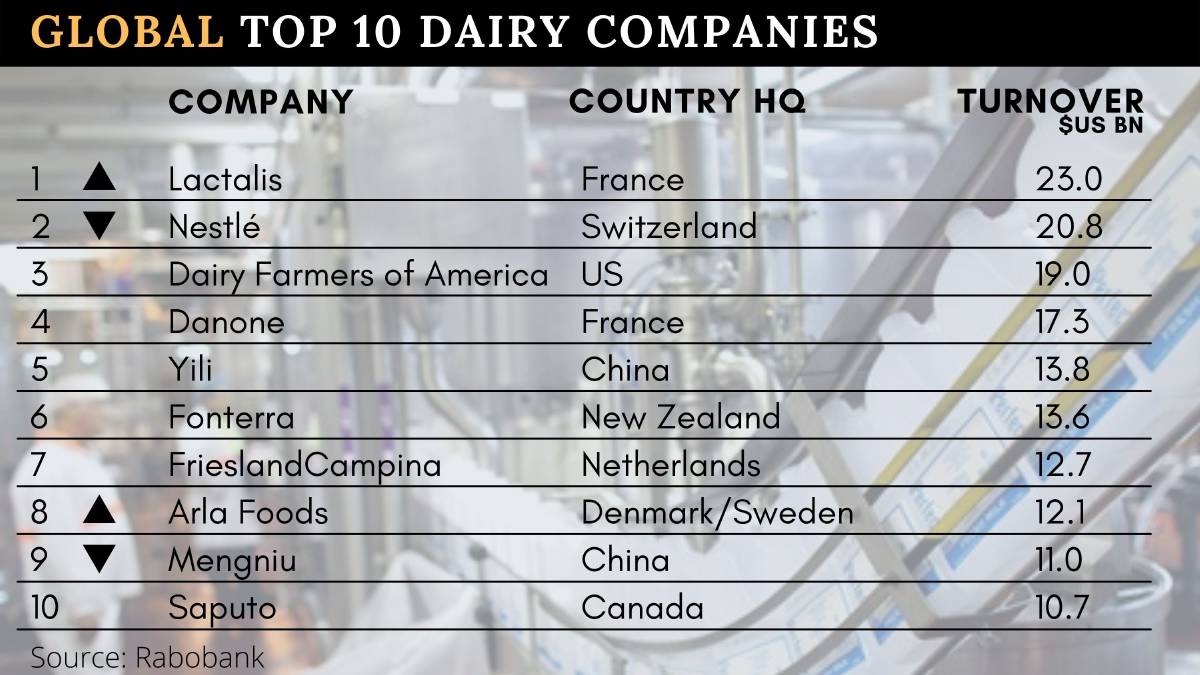 Lactalis has a huge footprint in Australia, with a presence in all states and a big share of the liquid milk market.

It acquired Parmalat in 2011, but only changed the name in Australia to Lactalis in 2019.

The Italian Parmalat made a move in Australia in the 1990s, firstly claiming a stake in a small NSW-Victorian border milk processor before acquiring Queensland-based Pauls and then National Foods sites in NSW and SA.

The 2014 acquisition of Western Australian company Harvey Fresh and 2015 acquisition of Fonterra's yoghurt's and desserts business with plants in Victoria and Tasmania gave Lactalis an Australia-wide footprint.

Lactalis's aggressive mergers and acquisition strategy has been one of the keys to its growth.

"Lactalis's attention to organic growth, as well as its dedicated global M&A strategy, propelled the company from ninth place in 2000 to a dominating lead position in 2021," Rabobank global dairy strategist Mary Ledman said.

Rababonk's report said Lactalis had grown its empire since 2010 by adding about 60 deals, expanding its global footprint in the Middle East, Africa, and North and South America.

Nestlé has been the number one dairy company for more than two decades.

The company sold its US-based ice cream business in 2019, foreshadowing a shrinking size.

But Nestlé's estimated 2020 dairy-related turnover of $US20.8b billion is 60pc higher than at the start of the century.

Fonterra held onto sixth place with a turnover of $US13.6 billion, though the giant New Zealand co-operative has lost ground in the past two decades, slipping from third place in 2010 and fourth place in 2000.

Chinese company Mengniu Dairy, which has a stake in Gippsland processor Burra Foods and which missed out on buying Lion Dairy in 2020 after failing to get approval from the Australian Government, fell from eighth to ninth position with a turnover of $US11 billion.

Saputo, which first made a move into the Australian market in 2014 when it acquired Warrnambool Cheese and Butter before snaring Murray Goulburn in 2018, placed 10th with a turnover of $US10.7 billion.

The Rabobank report revealed the top 20 global companies had weathered the COVID-19 pandemic storm, with their combined turnover falling just 0.1 per cent in US dollar terms compared with a 1.8pc gain the previous year.

The global uncertainty slowed the pace of merger and acquisition activity with about 80 deals announced compared with 105 in the previous year.

"Overall, the dairy sector fared better than many feared at the onset of the worldwide pandemic, demonstrating the sector's resilience," the report said.

According to New York University's Stern Center for Sustainable Business, sustainability-marketed US milk sales grew more than 20pc from 2013 to 2018, compared with negative growth for the category as a whole.

Sustainability-marketed natural cheese and yogurt sales grew over 30pc and 20pc, respectively, compared with near 10pc growth for those categories broadly over the five-year period.

The trend to dairy companies becoming involved in non-dairy alternatives is also increasing.

Most significantly, Danone's turnover in dairy alternatives, following its acquisition of WhiteWave Foods in 2017, was recorded $US2.5 billion, up 15pc on the previous year.

If these sales were added for the report, Danone would have lifted from fourth to third position on the list.