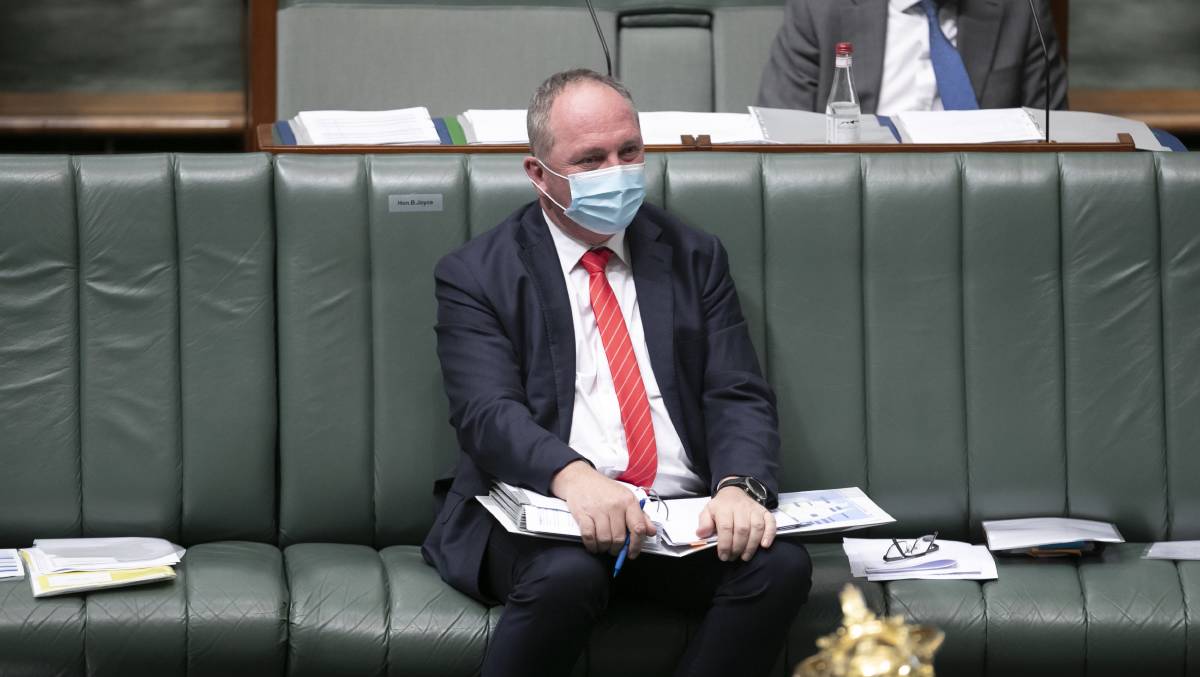 ALIENATED: Barnaby Joyce and the Nationals find themselves increasingly isolated on climate action, according to the new data. Photo: Keegan Carroll

In every National-held electorate, the majority of voters said climate change action was either "an important issue" or "the most important issue" in determining their vote in the upcoming election, new polling data reveals.

More than 15,000 people from across the country were surveyed by You Gov, which also found more 50 per cent of voters in all National seats want the government to "do more" or "do much more" to combat climate change.

The survey was commissioned by the Australian Conservation Foundation and conducted by You Gov, who uses a polling method called multilevel regression and poststratification.

You Gov correctly predicted the United Kingdom's 2017 hung parliament, when all other pollsters failed, along with the Brexit results.

The weight Nationals' constituents placed on climate action being "an important" or "the most important" issue ranged from a high of 61pc in Page and Gippsland, to a low of 51pc in Maranoa, averaging at 56.5pc.

An average of 57.1pc want the government to "do more" or "do much more" to tackle climate change, with a high of 61pc in Flynn and a low of 51pc in Maranoa.

The Nationals have so far resisted any move towards a net-zero carbon emissions target. Deputy Prime Minister and party leader Barnaby Joyce he understood climate action was "held as an important issue to many people", but was reluctant to "spring something" on voters.

"You can't do something without telling people how you will achieve it.... everything comes at a cost and you must tell people the cost," Mr Joyce said.

However, the Nationals hold several portfolios that would be involved in drawing up any significant climate action plan, including infrastructure, transport, resources and agriculture.

When pressed on why he had not requested department staff to begin working on a plan to reach carbon neutrality, Mr Joyce responded: "I'm not a scientist mate, I'm a legislator".

"The leader of the Nationals will not be the lead minister on any plan. No politician will, it will be delivered by people with composite skills, then it will be looked at politically."

Deloitte economist Nicky Hutley said there was an overwhelming amount of evidence to show the cost of inaction was far greater than the cost of any climate action plan.

"Most of that investment would be going into the regions, because they're the perfect place to build renewable projects, which they can leverage to create new industrial hubs," Ms Hutley said.

"If Barnaby wants a costed plan, there are already plenty out there."

Australian National University political science emeritus professor John Warhurst said the survey results were "once again strong evidence" that the Nationals were out of touch with their electorates.

But that doesn't mean it will hurt them come election time.

"The hold of the Nationals on their seats is very strong," Prof Warhurst said.

"Individuals, Barnaby Joyce included, have been able to withstand personal issues and return with a stronger vote.

"Perhaps the Nationals think based on past experience they can take the electorates for granted on this issue and get away with it. But you would think these figures would eat away at the confidence in their position."

Gippsland MP Darren Chester is one of the few Nationals to publicly urged his colleagues to take part in the climate action debate.

"These are decisions for the entire party room, not just the leadership group," Mr Chester said.

"The survey results don't surprise me because I believe most regional people are very interested in practical environmental issues, including emissions reductions and climate change.

"From my experience, younger voters in particular are passionate about the environment and they expect their elected representatives to at least understand their concerns. Regional MPs who don't understand the issues will not get elected."

The YouGov survey found the vast majority of Australians want to see renewables and battery storage as the main ingredients in the nation's energy future.

Across the 16 National-held electorates, an average of 35.8pc of voters think coal and gas should be part of the nation's energy future, while 64.2pc preferred renewables and battery storage.

The Nationals hold 5 of the top 10 seats most supportive of coal or gas, but even in those electorates supporters of fossil fuels were in the minority.

Mr Joyce's seat of New England had the highest support for coal and gas at 45pc, while Nationals deputy leader David Littleproud's seat of Maranoa came in second with 41pc.

The Next Economy chief executive Amanda Cahill travels across the country, helping regional communities embrace the transition from fossil fuels to a low-carbon economy.

The survey results are consistent with what she's been hearing at public forums and workshops, and Ms Cahill noticed a big shift in public opinion after the Black Summer Bushfires.

"Before the fires, it was always a discussion about energy and the economy, we didn't really get asked about climate change - and if we did, it was quietly during a coffee break," Ms Cahill said.

"After the fires, the conversation really kicked off. Something clicked, even in big coal regions like central and northern Queensland, and the Hunter Valley."

While a number of politicians continue to claim coal is the cheapest form of reliable energy, Ms Cahill pointed out the chief executives of several energy companies had publicly stated coal could no longer compete with the price of renewables.