The family has been able to produce a composite animal that survives and thrives in traditional Brahman country. 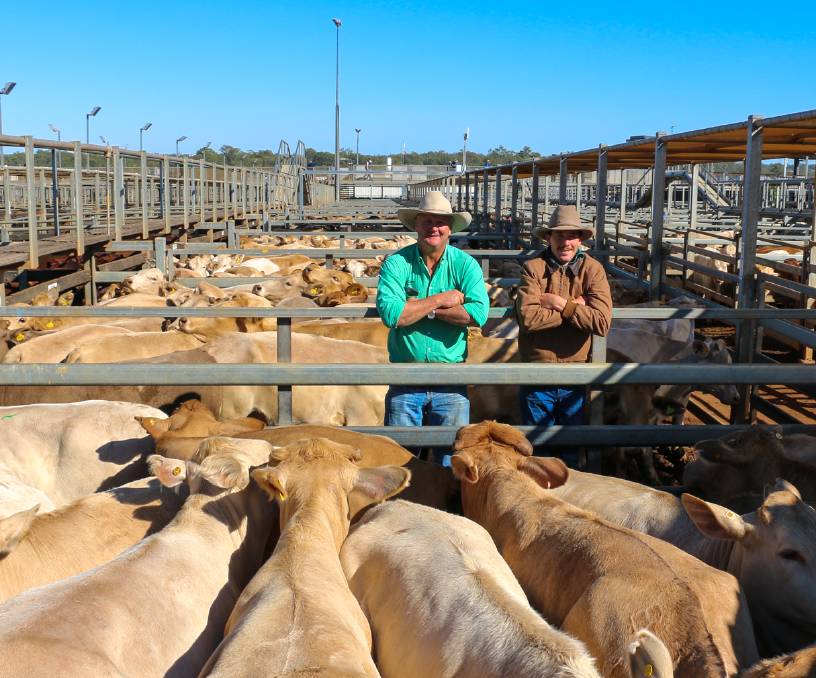 North Queenslanders Alister and Jo McClymont are commercial producers at heart but they still manage to breed more bulls in a year than some seedstock producers.

With properties running from the Gulf right down to Richmond, the large scale operation has become a powerhouse supplier to southern feedlots in recent years but the heartbeat of their operation is their meticulous composite sire program.

The McClymonts have run a purebred Brahman herd for 50 years but now join them to Angus bulls to create first cross sires for their own in-herd use.

Those animals showing more hair are put to a Senepol bull to produce a slick coated animal for survivability in the Gulf forest country. Some females are also joined to Charolais bulls for a Charbray base.

Young bulls are joined to heifers first before they head into the main herd to work at a 2.5 to 3 per cent joining rate until six years of age. Females are culled at 12 years.

"We cull all of our bulls at six-years-old out of the herd," Mr McClymont said.

"We are replacing 20 to 25 per cent of our genetics every year. We can't change the cows but you can change the bulls."

For the past five or six years, all of their commercial herd has been joined to composite bulls but they still run a pure Brahman mob in case they need to reinstate the genetics.

The belief that data is lost on commercial producers couldn't be further from the truth at Burleigh Station.

This year, for the first time, all of the stud calves have been DNA tested, with homozygous poll and fertility traits key.

Demand for their stock means steers are now turned off at about two years of age into Whaka Feedlot, just outside of Dalby.

A year after they are weaned, steers are drafted into lines of 500 to 700 head based on similar growth patterns, breed type and size and remain in their new mob for another 12 months before they are sold.

Mr McClymont said after visiting America four years ago, he realised lot feeders desired large lines of cattle but often struggled to find them. "That's the biggest complaint they've got over there, they can't get even lines of cattle to put in pens or from the same background," he said.

"You certainly can't buy them out of the saleyard and there is not a lot of people down south that can come up with a couple hundred of even lined cattle, there is just none around, so when you come up around with a few thousand or 500 in lines, you command a premium.

"We are able to sell them a couple of months out and know they are going on a certain date."

Running such a large operation means you do 'lose sleep', but the McClymonts never stop looking at new ways to improve.

Every few years they trial a different part of their business, this year opting to test the viability of running bullocks on crop.

They have around 2000 hectares of country ploughed on their property at the base of the Gulf and were able to put between 1000 and 1200ha to forage sorghum. Unfinished steers or those that don't meet feedlot weight will be put on the dryland crop to speed up their turnoff.

Their composite bulls have brought high fertility to their herd which is another reason why 5000 surplus females, some agisted at Cunnamulla, will be sold through Roma Saleyards in the coming weeks with Nutrien.

From next Tuesday, 2000 pregnancy tested heifers will be drafted into lines and sold, while another 3000 will be offered in future sales.

"It's a great opportunity for producers because they will be drafted into smaller lines and it gives producers from all different sizes the chance at securing some of the genetics where previously they'd been sold in bigger lines," he said.

"The reality is the genetics are proven performers whether you want to breed out of them, feed or fatten.

"Being northern cattle some producers were a bit apprehensive, but we had a lot of cattle people come back and buy week after week based on getting the cattle home and seeing how great they were to handle."