The cotton season has begun on the Central Highlands. 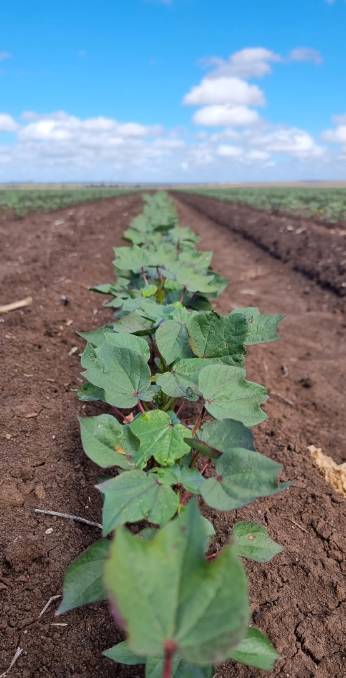 A few rows of late May cotton (planted under permit) starting to emerge at Neek Morawitz's property in Comet, as he trials alternative growing conditions.

COTTON is going in the ground in the Central Highlands and Dawson Valley, with August 1 marking the first day of the planting window.

Comet district cotton grower Neek Morawitz, is among the first to get seed in the ground, with 224 hectares of dryland cotton planted on August 4.

Mr Morawitz is hoping for favourable conditions and more inflows into the local catchment to increase his overall cotton plant.

"The cotton we have in the moment looks beautiful. It's been a great mild start to the month of August and we now have a good establishment at the two week point, which we're really happy with," Mr Morawitz said.

"At this point in time, the weather seems quite favorable in terms of temperature. August can be a bit chilly at times, but this year it's really been warmer temperatures right from that first week.

"We had a good run last cotton season and came out with exceptional yields and of high quality. The season started a bit shaky, but it ended up being quite a solid season so I guess we're hoping for similar things this year."

With Fairbairn Dam now at 15 per cent capacity, Neek said this is the third year running now that growers had experienced a similar start to the season with limited water.

Mr Morawitz is currently trialing a few rows of late May planted cotton (under permit), to test the viability of the crop during winter.

"Being tested in limited water years is kind of what drives growers to think out of the square," he said.

"Trying to fit better with the weather patterns has certainly helped us yield more cotton and of a higher quality.

Cotton Australia's Central Highlands regional manager Renee Anderson, said majority of the cotton has been planted by growers along the Nogoa Mackenzie scheme.

"The region has seen an increase in cotton yield in the last couple of years. Mainly because growers have maximized the water in a really timely way, but the area planted has been reduced," Ms Anderson said.

"The overall plant may increase only if there's some rainfall in the catchment. I don't think anyone would opportunity plant cotton without receiving some allocation."