Toyota LandCruiser fans have been paying top dollar on the used market and for the last of the V8-powered 200 Series, but if stock standard isn't your thing, you might want to check out this custom 1984 HJ47 which has been listed online for $200,000.

Gold Coast vehicle restoration and modification company Bespoke Off Road bought the 40 Series from a LandCruiser collector at Withcott in early 2020, and with the help of various contractors, restored and modified it.

"How long he had it and where it came from before that I really have no idea. It was basically in pieces and we rebuilt it," Mr Broad said.

Mr Broad said he's had plenty of enquiries but no one had pulled the trigger on the sale.

"The paint and panel work cost $45,000 and there's 3000 hours of labour in it. Building a car out of parts is an incredibly expensive exercise.

"It's essentially a new car. Everything on it has been rebuilt or refurbished or replaced.

"The engine's been overhauled, the gearbox has been overhauled. It's a new turbo, the ancillaries under the bonnet are all new and the seats are $4000 each - there's a lot in it."

The body and chassis were stripped down to bare metal and painted in Toyota heath grey, with virtually every part replaced or overhauled. 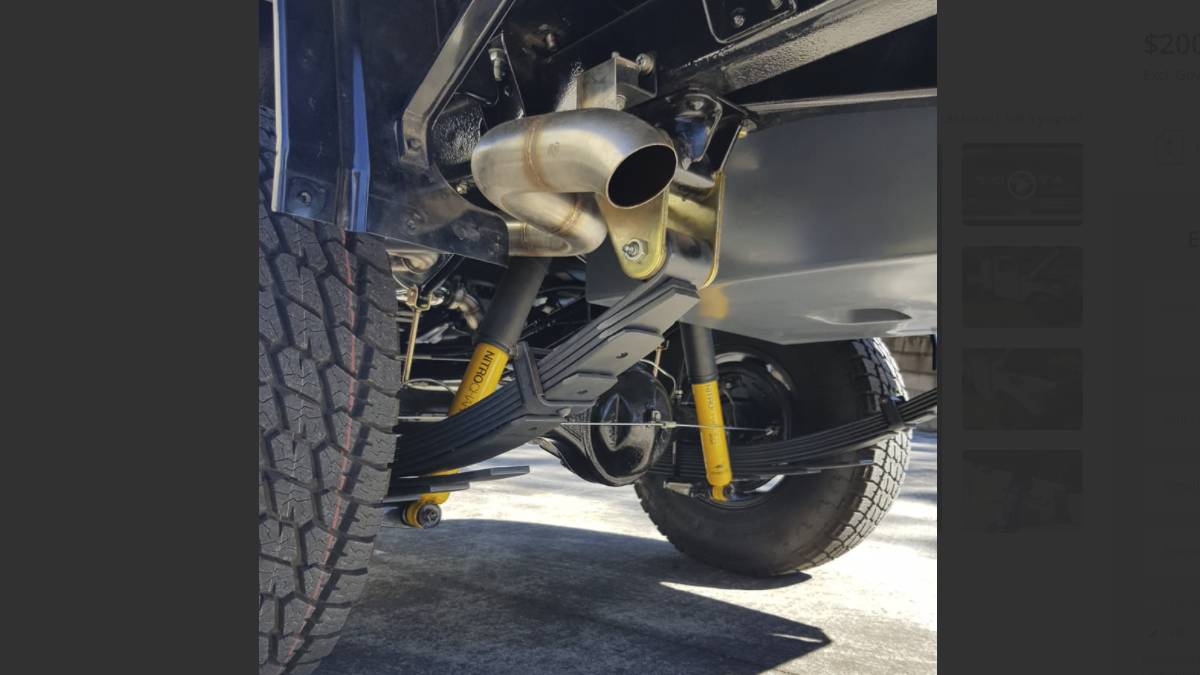 The vehicle has been reengineered and fitted with a rebuilt Toyota 1KD-FTV three-litre four cylinder turbo diesel engine mated to a rebuilt five-speed Toyota R151 gearbox from a 70 Series.

It has been completely re-wired with a new custom harness.

The front and rear axles and diffs have been overhauled and fitted with air lockers and 3.7:1 ratio diffs. It also has free wheeling hubs.

The bull bar is fitted with nine-inch LED spotlights to complement the seven-inch LED headlights.

Brakes are all new, with new front discs and callipers.

Air suspension seats with lumbar support have been installed to smooth out the ride.

The interior is finished off with a digital dashboard, air conditioning, LED interior lighting, power windows and central locking.

Mr Broad grew up on a cattle, sheep and cropping farm outside of Penola, South Australia, but his love for LandCruisers didn't start until after high school.

"My first job out of school was jackarooing at an Aboriginal cattle and horse station at Balgo Hills in WA, so these old LandCruisers were what we used to use. I always loved the LandCruisers."

He later went on to become an airline pilot, but when COVID-19 began to affect the industry, he decided to look elsewhere.

"I've always been a four-wheel-drive enthusiast. I've had a couple of LandCruisers in the past, but this was something where I thought I could follow my passion and hopefully make a business out of.

"I looked at a business up on the Sunshine Coast that rebuilt LandCruisers and I was surprised at how popular they've become.

"40 series LandCruisers are very popular over in the States as well, and there are some companies over there that are just doing amazing rebuilds.

"I decided I wanted to try and do something like they're doing.

"There are plenty of people rebuilding old cars over here but not the way we've done it. I want to do something a little bit different."

Mr Broad said the project timeframe blew out to 18 months due to the complicated electrics, but it was worth it in the end.

"The project took me a lot longer than I was expecting, that's for sure. It was quite complicated making it simple.

"Cars now are quite integrated with how the electrics talk to components and of course, we had a modern engine in an old car, so we had to make it work by itself.

"That proved to be a lot more difficult and time consuming than I was anticipating. But now it's all going well and has been engineered to Queensland transport standards."