Jambili Belgian Blues and South Devons at Jandowae had cattle on the grounds when the lockdown was first called. Photo: Supplied

Trucks returned to the showgrounds today to pick up the remaining cattle as the entire event was called off.

Beef cattle exhibitors who were stuck inside the Brisbane Showgrounds as the city plunged into a lockdown on Saturday afternoon have been released to head home.

More than 1000 head of stud cattle were nominated to compete at the Royal Queensland Show this week and many had begun their journey to the city on Saturday as news broke of a COVID-19 lockdown.

While the message made it just in time for the majority of competitors, some keen exhibitors were already stuck in the hotspot.

Trucks returned to the showgrounds today to pick up the remaining cattle as the entire event was called off.

James and Kath McUtchen of Jambili Belgian Blues and South Devons at Jandowae were set to exhibit 21 head of cattle in total but only had six bulls on the ground when the lockdown was announced.

Mr McUtchen returned to collect his wife and their stud bulls from the showgrounds on Monday morning to lockdown on their own property.

While it was an eerie feeling to be at the grounds without big crowds, Ms McUtchen said it was just like a normal show and they fed them, mucked out the stalls and washed the cattle.

"There were no fights for sawdust," she said.

"The lights kept going off because we didn't have enough people and movement to keep the sensor lights activated."

"It was just like being at a show but not going in the show ring and there were no people," Mr McUtchen added. 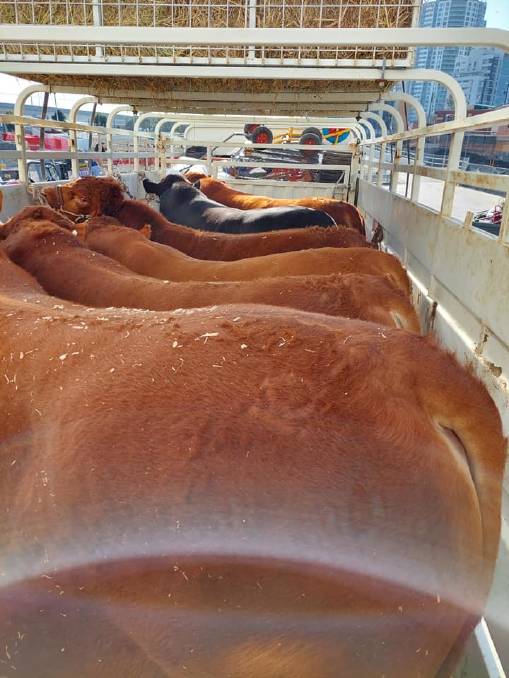 Cattle heading home after a visit to the Ekka.

It is understood one cattle fitter had up to 80 head at the grounds, many of them for the Santa Gertrudis feature show, but they would be departing on Monday afternoon.

Droughtmaster breeder Bronwyn Betts of Nindethana Droughtmasters in the Samford Valley, north west of Brisbane, had her cattle ready to head into the grounds on Saturday when the news broke.

Their site was set up but thankfully the cattle could be turned around.

"We left all the gear in the ute, other than the stuff that had to go in the fridge, hoping we might get to turnaround and take it back," she said.