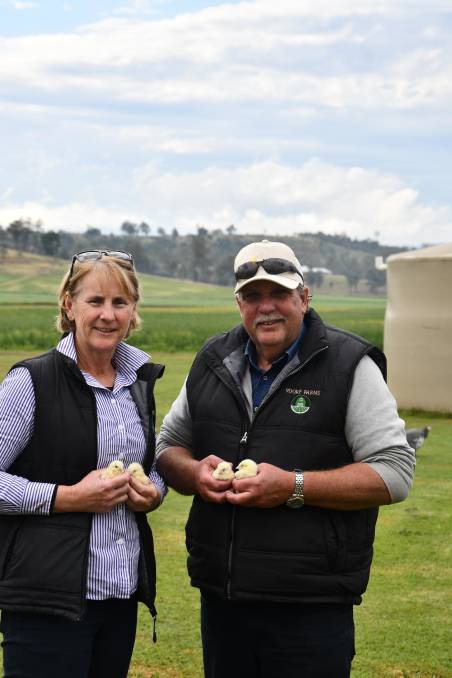 PASTURE RAISED POULTRY: Bronwyn and David Neuendorf holding some baby chooks that are a few weeks away from going on the paddock.

If you were to knock on the door of Lilydale farmers David and Bronwyn Neuendorf ten years ago you would have heard a very familiar story shared by most farmers in the region.

A traditional cattle, dairy and grain farm who were having their future dictated by horrendous drought conditions.

The financial stress forced the fifth generation farmers to investigate new ways of farming that was not only profitable but regenerative for their land.

And today, if you were to knock on the same door, you'd see that investigation payed off, with lush green paddocks, a rebuilding herd, and three thriving separate poultry, egg, and aquaculture ventures.

Inside the coops, the chickens are filling their stomach's with grain, which they do for eight to ten weeks, before being sent to Brisbane's top restaurants as a premium chook.

Mr Neuendorf said that they were forced to look to methods of the past, in order to move forward.

"Families use to do it years and years ago, but there's a lot more potential with regenerative farming than first thought," he said.

The family have just purchased a Droughtmaster stud are planning on getting their cattle numbers back to up after destocking a heard of around 50 because of drought conditions.

"We're rebuilding our herd to get cattle back on the paddock, and we can earn more revenue on a 40 hectare paddock with poultry than we would cattle."

"The plan is to integrate them all together, so the chickens can dig down the cow dung and help heal the land more."

Mr Neuendorf said that by implementing Joel Salatin's controlled grazing methods they can keep their land healthy and cattle fed.

Ms Neuendorf said that as consumers are becoming more aware of the "disappointing" reality of the free-range poultry industry, they are looking for more ethically sourced chicken meat.

"Pasture raised poultry is a growing industry, and it's really capturing a market of people who want their meat to not only be raised ethically, but to a benefit for the environment," she said.

"People want their chicken to have lived a healthy life, and we grow our chickens twice as long as what the industry does." PASTURE RAISED: Chooks chew away at the shrub and clean up otherwise useless land.

Ms Neuendorf said that pasture raised chicken creates not just a more ethical produce, but a more delicious one.

"A bird doesn't really get taste in flesh until six and half, to eight weeks old," she said.

"People always say something tastes like chicken when it doesn't, that's because they're conditioned to chicken that lacks the rich flavour provided when you give the animal the chance to grow in grass and with sunlight."

Ms Neuendorf said that they run 500 hens per hectare.

"We have Brisbane's top restaurants as customers, as word spreads about pasture raised produce, so does our customer list," she said. 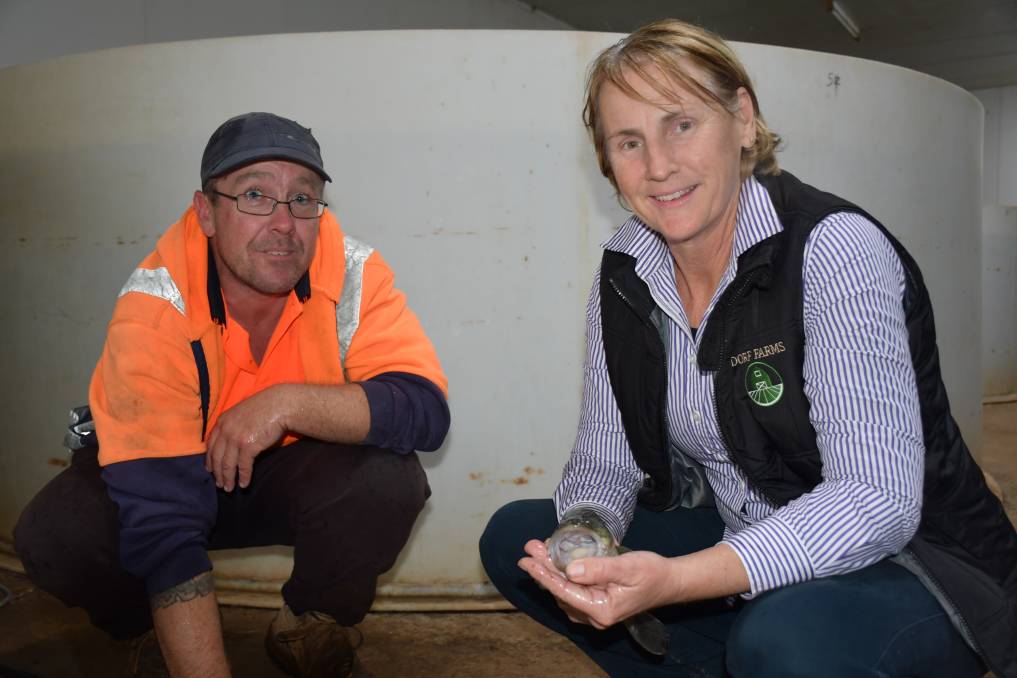 MOMENT OF INSANITY: Corey Case and Bronwyn Neuendorf, Bronwyn said a trip to Israel opened her eyes to the potential of on farm aquaculture.

Murray Cod in the Lockyer?

On top of regenerative practices, the Neuendorf's have turned their hand to aquaculture, producing Australian native fish inside their farm shed.

There is more than 80,000 fresh water fish inside their tanks, which get sold to the premium restaurant and Asian fish market.

Ms Neuendorf said the decision to move into aquaculture came from a brief moment of "insanity".

"I don't think I could have kept a goldfish alive before, we did not know what we were getting ourselves into,"

The husband and wife team flew to Israel for a research trip in 2011, and have been moving forward since.

"Going to Israel was a real eye opening experience, but it was still difficult to come back here and start from scratch, there wasn't anyone to learn from," Ms Neuendorf said

"We have made a lot of mistakes to get to where we are today, and now we're ten years on the other side of that and we grow big clean fish that the market loves."

Every drop of 30,000 tonne recirculation system is put to use, providing nitrate rich irrigation water for their cropping.

Mr Neuendorf said the irrigation water that has ran through the fish tanks provides some of the best crop he had ever seen.

"It's done wonders for our paddock, I noticed the difference in production from the first crop we grew with the fish water.