Keeleigh and Brian Allport with a pen of bucks ready for the domestic market.

How a land management tool became a crucial part of Brian and Keeleigh Allport's grazing operation at Moonie.

When Brian and Keeleigh Allport set out to get the most out of their unproductive land, they couldn't have imagined how their grazing operation would change.

Bringing 1200 Rangeland goats to Inverclyde at Moonie, Queensland, from western New South Wales almost four years ago, their operation has gone from cattle breeding and fattening, to a premium goat meat paddock to plate business.

Originally running 1000 Hereford and Angus cows which they crossed with Santa Gertrudis bulls, the Allports utilised home-grown grain and hay to value add and finish their cattle for the domestic market.

"We started it as a bit of a project - we've got some lighter, less-productive country and we thought we needed to try and utilise all our land and decided small stock needed to go in there rather than cattle," Mr Allport said.

"We had to upgrade fences anyway, so we thought we'd do our fences properly right from the start - we did a fence that could run cattle, run sheep, run goats, and we put an exclusion fence up as well.

"We bought a load of goats in out of western NSW, trialled that, and it was a real learning curve."

Then came the need to find a market.

"A meat trader out of Brisbane happened to ring us and was looking for some goat so we commenced a weekly delivery to him, going into the domestic market doing about that 80 to 120 carcases a week."

The pivotal point in their operation came when drought took hold.

"We kept our goats and offloaded 70 per cent of our cows," Mrs Allport said.

"We kept buying goats throughout the drought. It was a pretty-high risk decision but we knew the drought was going to break."

They got through with all of their own fodder, except for one load of hay right before the drought broke.

"We always put hay away and we thought we could get better value out of small stock rather than feeding cattle so that was a bit of a punt, replacing the cattle with goats," Mr Allport said.

"We bought all does and fed those to maintain them through. We were fortunate they did cycle and then when the drought broke, we had kids on the ground and we were off and running."

"When the pandemic hit and everything was shut down, that wholesale butcher that we were dealing with couldn't come to the processing plant anymore because it was too high risk," Mr Allport said.

"That then allowed us to focus on our breeding program and keep accumulating numbers.

"When we were ready to go again, we thought to ourselves 'let's do as much of the supply chain that we can do ourselves', so we then did the market research and matched the product to suit their needs."

Speaking to several butchers in Brisbane, the Allports found some who were willing to give them a go.

"Now we're supplying into butchers in Brisbane and some of them supply into restaurants up the east coast of Queensland, as far as Townsville, Toowoomba and the Gold Coast," Mr Allport said.

"We're supplying a premium article, and we've developed a nutritional program - they're grain-assist, crop fattened - which is giving the customers a better eating quality goat.

"We're doing around that 300 a week at the moment, while we're still setting everything up. We hope by October we'll be doing 500 a week, and then we'll just keep growing from there."

They also purchased their own cold truck.

"With that processing going into the domestic market, we took the approach that we would run the whole process from paddock to plate; the only thing we don't do is own the abattoirs," Mr Allport said.

Key to supplying a premium article is the genetics the Allports have been investing in.

"We've been buying a lot of our genetics from Youlden Valley stud (Cargo, NSW), and we're quite happy with the way those genetics are going for us.

"We're chasing red Boers as well as red and white ones; there's that big push at the moment for these Kalahari Red goats, so we are putting a percentage of that in but so far, I haven't seen any yield difference." They also have a heavy management program on the does, Mr Allport said.

"We select those to match our bucks, then we're running our own stud herd as well to breed those premium articles to put back over our own stock.

"The benefit of the high-weight-gain genetics and a well-designed nutrition program is that it reduces the production cycle time which is really important.

"Compared to beef cattle, it's nine months to carry a calf so you're not turning that animal off then until they're at least 12-months-old.

"Our production cycle time is so much quicker with the goats, and our weaners, we're getting them out within nine months so that turnover is a lot quicker with the program we've developed."

Traditionally used for curries, the Allports aim to deliver an article that has more variation in what it can be used for, like a roast and chops.

"We want to educate people to start putting goat on their menu so that it's an alternative to the traditional protein options such as beef, lamb and pork," Mrs Allport said.

"We'd like to encourage people to start considering sourcing good-quality goat meat like our Grassland Goats product and I think the interest is starting to gather as well, as opposed to some of the other more obscure protein products like kangaroo or emu.

"Goat could really be a part of a staple diet because it's not dissimilar to lamb." 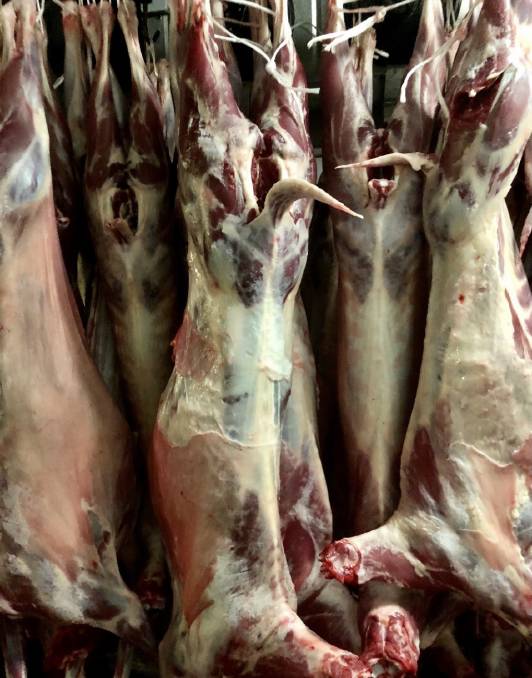 Grassland Goats currently turns off 300 carcases a week, with a goal of increasing that to 500 by October.

Incorporating goat meat into their diet three nights a week, the Allports say they are enjoying cooking the premium-quality product.

"It's the most-eaten meat in the world, but we've got so much good quality beef and lamb that it's not on [Australia's] radar," Mr Allport said.

"We love experimenting with it and seeing what it can do like a rolled roast or the backstrap roasted or curries and camp oven cooking, just dabbling in a few different cooking methods," Mrs Allport said.

It's also gaining momentum in the fine dining space.

"Since the release of the Shell QGC Emerging Exporters Program (delivered by Toowoomba and Surat Basin Enterprise), we've got high-end restaurants and caterers interested in introducing goat to their menus on a regular basis which is going to be fantastic for us," Mrs Allport said.

"We've been talking with some customers overseas already and we know there's a demand for that top-end, premium goat meat product into high-end restaurants in South East Asia.

"Export is our end goal while still supplying the domestic market with this premium article that we're developing and through the Emerging Exporters Program, that's going to help us set up our markets."

What started out as 'a bit of a project' has grown to be 80pc of their operation, with cattle now making up 20pc of what they do.

"We kept all our replacement heifers in the drought, that's one thing we did keep, so we're back to 350 breeders again," Mr Allport said.

"We don't have any old cows anymore, they all went through the drought and we got big money for those cows in the drought too; that was a fortunate thing out of this drought, cows were worth really good money, they weren't given away.

"We will keep that cow herd because we find it fits well into our rotation of our pastures with the goats in the system because they both have two different eating characteristics, or food targets. And it helps us with our worm rotation with the goats as well."

Achieving what they were first intended for, the goats are doing a good job of regrowth management.

"They've helped us instead of blade ploughing and poisoning a lot of regrowth, the goats are killing a lot of that regrowth through their grazing practices," Mr Allport said.

"We're also finding the response on the goat country after the rain is a lot quicker, they don't graze the ground as hard as what the cattle do."

Ultimately, the decision to invest in goats as a land and vegetation management tool has paid off, with the Allports saying they never expected the animals to become the main part of their business.

"Our main focus has always been cattle and beef production, so we thought goats were a bit of a novelty to start with," Mrs Allport said.