Clive Dingle and Keely Wedrag in a magnificent stand of managed spotted gums on Arvale, Mount Perry - the result of a landscape management system developed over generations.

The Dingle family has developed a complementary dual-income system over generations by carefully managing the landscape.

MANAGED stands of hardwood timber and Droughtmaster cattle are proving the perfect match for the Dingle family at Arvale, Mount Perry.

Long associated with the historic North Burnett town, the Dingles have developed the complementary dual-income system over generations by carefully managing the landscape.

The 3200 hectare operation, which ranges from fertile creek flats through to moderate and even some steep hills, runs about 1000 high-quality Droughtmaster cattle, including 500 breeders.

Arthur Dingle said being in a 915mm (36 inch) rainfall belt was a big advantage.

"The wonderful thing about this Mount Perry country is it can certainly grow trees as well as produce good-quality cattle," Mr Dingle said.

"Experience shows that if we can keep the density of trees at about 100 stems an acre (240 stems/ha), we can very successfully grow commercial logs.

"Good timber doesn't come easy. It's hard work dealing with the regrowth and rubbish and keeping the density at the right level.

"There is also the added advantage that keeping the trees under control means we are able to continually grow the grass required by the cattle.

"I've always said you just have to pick what you reckon is the right path, keep going and do it right."

To achieve the ideal density, competing timber is removed about every five years, a job which keeps Arthur and Valerie Dingle's son Clive, daughter Beryl and worker Keely Wedrag constantly on the go.

The spotted gum, blue gum and ironbark trees are harvested on about a 15-year cycle, when they achieve a minimum trunk diameter of 40cm.

"It's all about the quality, the diameter and the length of the millable timber. That's what we're paid on."

The cattle are sold through the Biggenden Saleyards.

Mr Dingle said he was first impressed by Droughtmasters when carrying out timber control work at Kirknie, Home Hill.

"As soon as I saw them, I knew they were exactly the cattle we needed for this country."

Careful management of the landscape has been the key to doubling the original carrying capacity of the Dingle family's country at Mount Perry.

"It's all about getting the balance right," Arthur Dingle said.

"If too many trees are allowed to get away, there isn't enough grass. And if the timber is too dense, the trees compete with each other. They can't grow to a commercial size.

"But get it right and a wonderful, balanced environment is created that allows both timber and cattle to thrive." 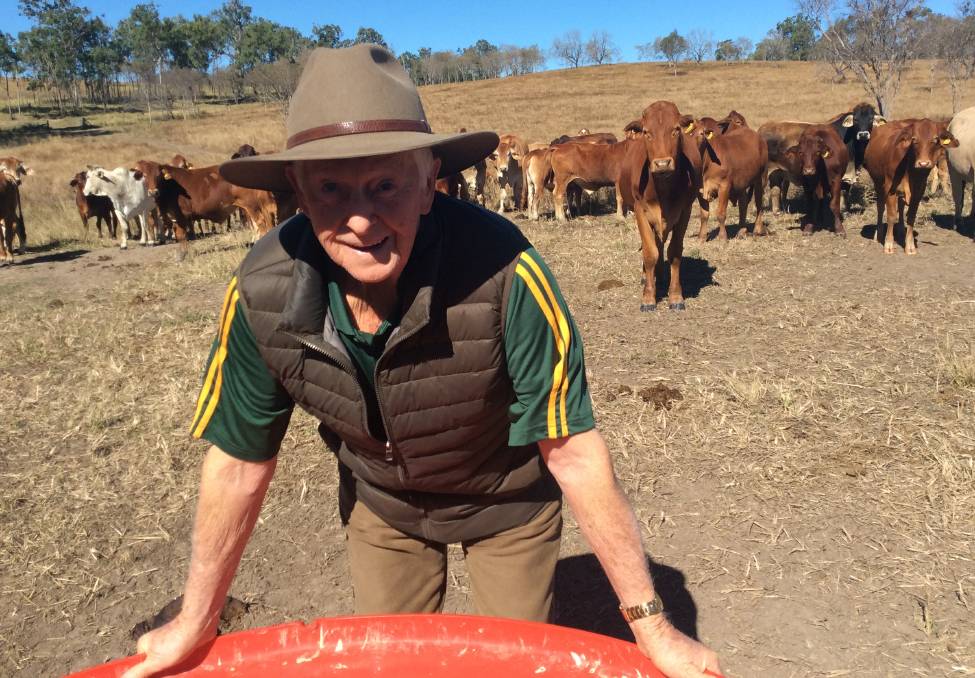 During his 78 years, Arthur Dingle has seen plenty of Queensland, traveling far and wide with his timber control business.

Mr Dingle is also well known as a champion axeman, regularly appearing at chops and even representing Queensland.

In the early years, he also spent nine seasons cutting cane by hand in the Bundaberg region. "We'd work on cutting 14 tonnes a day, or 10 tonnes if we had to pick it up ourselves," he said.

"That meant replacing three blades on your cane knife each season."