This magnificent used sire and Raff Empire E269 son sells as lot 32 in the Raff Angus sale at Walwa, Vic, on August 23.

Commercial clients of Raff Angus are reaping the benefits of its strong carcase focus, with recent processing feedback confirming the stud's position as a leading supplier of high-performance genetics.

Commercial clients of Raff Angus are reaping the benefits of its strong carcase focus, with recent processing feedback confirming the stud's position as a leading supplier of high-performance genetics.

According to Meat & Livestock Australia figures, during the 12 month processing period from June 2020 to June 2021, 1,041,003 bodies of beef were processed nationally with no hormonal growth promotant, grassfed, either sex and an ossification average score of less than 230.

Within this category were 260 Raff Angus steers and heifers, fattened and finished on the stud's King Island farm before being ferried to Tasmania for processing through JBS Australia, Longford, and HW Greenham at Smithton.

Raff Angus stud principal Andrew Raff said extensive analysis of the Raff-bred steers and heifers showed that their cattle yielded an average 52 kilogram heavier carcase weight, equating to a 15 per cent increase, when compared with the national 12-month average.

"At a $6.90 per kg carcase weight average value this increase equates to more than $350 more profit per carcase."

Further confirming the commercial quality of their genetics, full brothers to this year's rising two year-old sale bulls were processed through the JBS Longford plant in late June with further impressive results. 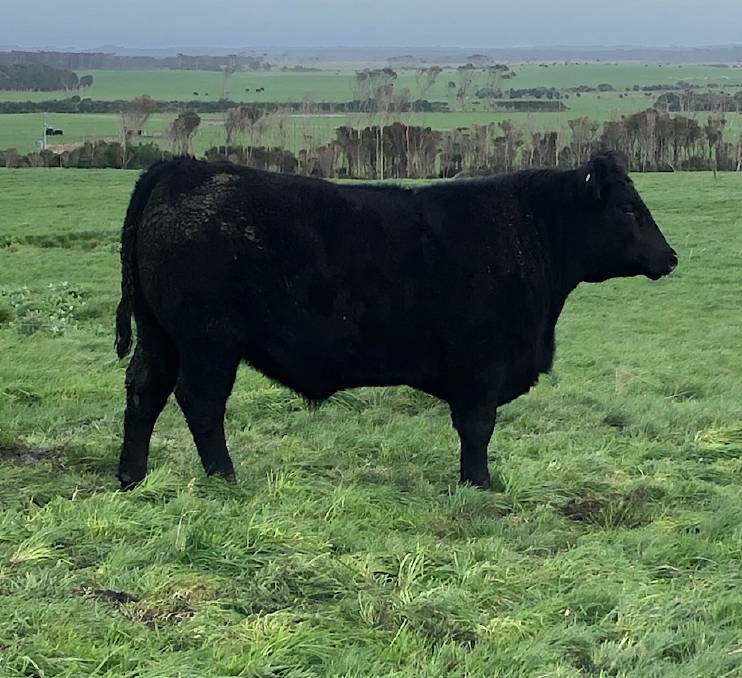 A Raff Angus bred milk tooth steer from the same contemporary group to this year's rising two year-old sale bulls. The steer had a carcase weight of 452 kilograms, marble score 4 and a Meat Standards Australia index of 67.51, returning $3273.32.

Mr Raff said the spring born Raff-bred steers were the complete draft and represented the bottom 50pc of all male calves born within that contemporary group. With an average age of just 21 months, they boasted an average carcase weight of 355kg.

"We compared the carcase feedback of our steers nationally against the 2,211 bodies processed that same day - steers only, no HGP, grass-fed, an ossification score less than 230," he said.

"Our steers had more marbling, more fat, a higher MSA index and, with the same ossification score, a 35kg heavier carcase weight.

The Raff Family will hold their Pedigrees with a Difference with Performance on the Hook Spring Celebration Sale on Monday, August 23, which will combine two sales in two different states on the one day.

The sale kicks off with a quality draft of 31 elite stud cows and one stud sire, to be sold by open cry auction at Walwa, Vic, at 12 noon immediately followed by the sale of 100 bulls at Drillham, Qld, at 1pm.

Both sales will also be interfaced through Elite Livestock Auctions and AuctionsPlus. Lot 4 in the Raff Angus sale at Walwa is Raff Blackbird J173, a heavy weighing, strong topped and extremely docile past donor cow. She sells re-joined with a magnificent bull calf at foot.

"With my parents David and Jill moving off-farm to retire to Toowoomba, this unique sale day is a showcase of their breeding direction since Dad established the stud in 1965," Mr Raff said.

"We have never offered a complete line-up of top end females before and it gives buyers an opportunity to invest in the very best Raff Angus maternal lines.

"They are females heavy in weight, big in capacity with strong muzzles and tremendous back-end width and shape."

The female catalogue comprises a mix of PTIC spring calvers - three of which have big bull calves at foot, re-joined autumn cow and calf units and pregnancy-tested-in-calf spring and autumn heifers.

A number of the females in the sale have been past donor cows with two direct Raff Empire E269 daughters on offer.

Mr Raff said prospective buyers who are physically at the bull sale will be able to watch the videos of sale females, hear the live sale auctioneering and be able to bid and buy from Drillham. Well-known auctioneer, Brian Leslie, will be conducting the female sale. Lot 3 is Raff Lady Durham J293, a Raff Empire E269 daughter and past donor. She sells pregnancy-tested-in-calf with a big spring born bull calf at foot.

Following the sale of the Walwa catalogue, the sale will immediately cross to the bull draft offered on-property at Drillham.

Mr Raff said the quality draft of sale bulls have been in Qld since mid-May and are well settled. They include a combination of 50 rising two year-old sires and 50, 16 to 18 months-old bulls, most of which are by home-bred sires and all are genetically varied to mainstream Angus.

"We are very excited to be back selling at our old property at Drillham and these bulls continue to showcase what the Raff breeding program is all about," Mr Raff said.

"They are strong boned types with good heads and wide muzzles that express strong muscle patterns with real width over the top line, extra length of spine and sound structure.

"Weight drives profitability and we want our cattle to excel for weight for age.

"Many of the bulls on offer are sons from fresh genetics sourced from the United Kingdom, they are powerful and magnificent."

Buyers at the female sale will be able to watch the videos of sale bulls, hear the live auctioneering and be able to bid and buy from Walwa. Sale auctioneer for the bulls is Ray White stud stock manager, Michael Glasser.