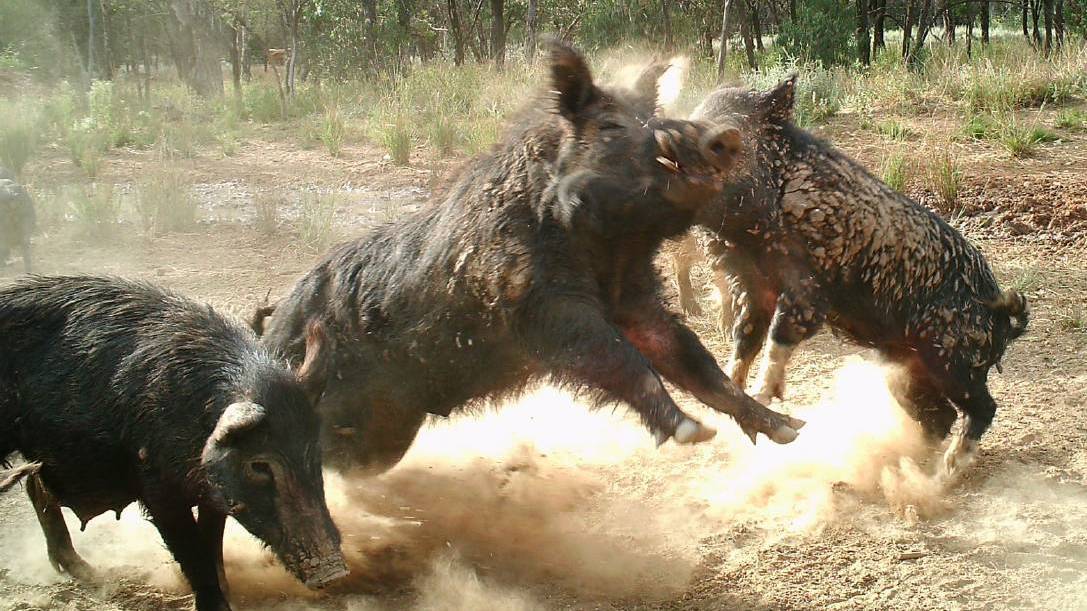 CLIMATE PESTS: By uprooting carbon trapped in soil, wild pigs are releasing around 4.9 million metric tonnes of carbon dioxide annually across the globe, the equivalent of 1.1 million cars.

Modelling by a team of international researchers has found that the hard hoofed pests uproot round 4.9 million metric tonnes of carbon dioxide from the soil.

New research has found that the climate impact of wild pigs around the world is equal to the greenhouse gas emissions of 1.1 million cars annually.

Modelling by a team of international researchers from The University of Queensland and The University of Canterbury has found that the hard hoofed pests uproot round 4.9 million metric tonnes of carbon dioxide from the soil.

UQ's Dr Christopher O'Bryan compared the invasive species to "tractors ploughing through fields" disturbing soil and releasing carbon, and warned that the ever-growing population is posing a serious climate threat.

"When soils are disturbed from humans ploughing a field or, in this case, from wild animals uprooting, carbon is released into the atmosphere," Dr O'Bryan said.

"Since soil contains nearly three times as much carbon than in the atmosphere, even a small fraction of carbon emitted from soil has the potential to accelerate climate change.

"Our models show a wide range of outcomes, but they indicate that wild pigs are most likely currently uprooting an area of around 36,000 to 124,000 square kilometres, in environments where they're not native.

"This is an enormous amount of land, and this not only affects soil health and carbon emissions, but it also threatens biodiversity and food security that are crucial for sustainable development."

They then modelled the amount of soil area disturbed from a long-term study of wild pig damage across a range of climatic conditions, vegetation types and elevations spanning lowland grasslands to sub-alpine woodlands.

Because wild pigs are prolific and cause widespread damage, they're both costly and challenging to manage. - University of Canterbury PhD candidate Nicholas Patton

The researchers then simulated the global carbon emissions from wild pig soil damage based on previous research in the Americas, Europe, and China.

University of Canterbury PhD candidate Nicholas Patton said the research would have ramifications for curbing the effects of climate change into the future.

"Invasive species are a human caused problem, so we need to acknowledge and take responsibility for their environmental and ecological implications," Mr Patton said.

"If invasive pigs are allowed to expand into areas with abundant soil carbon, there may be an even greater risk of greenhouse gas emissions in the future.

"Because wild pigs are prolific and cause widespread damage, they're both costly and challenging to manage.

"Wild pig control will definitely require cooperation and collaboration across multiple jurisdictions, and our work is but one piece of the puzzle, helping managers better understand their impacts.

"It's clear that more work still needs to be done, but in the interim, we should continue to protect and monitor ecosystems and their soil which are susceptible to invasive species via loss of carbon."

The research has been published in Global Change Biology.