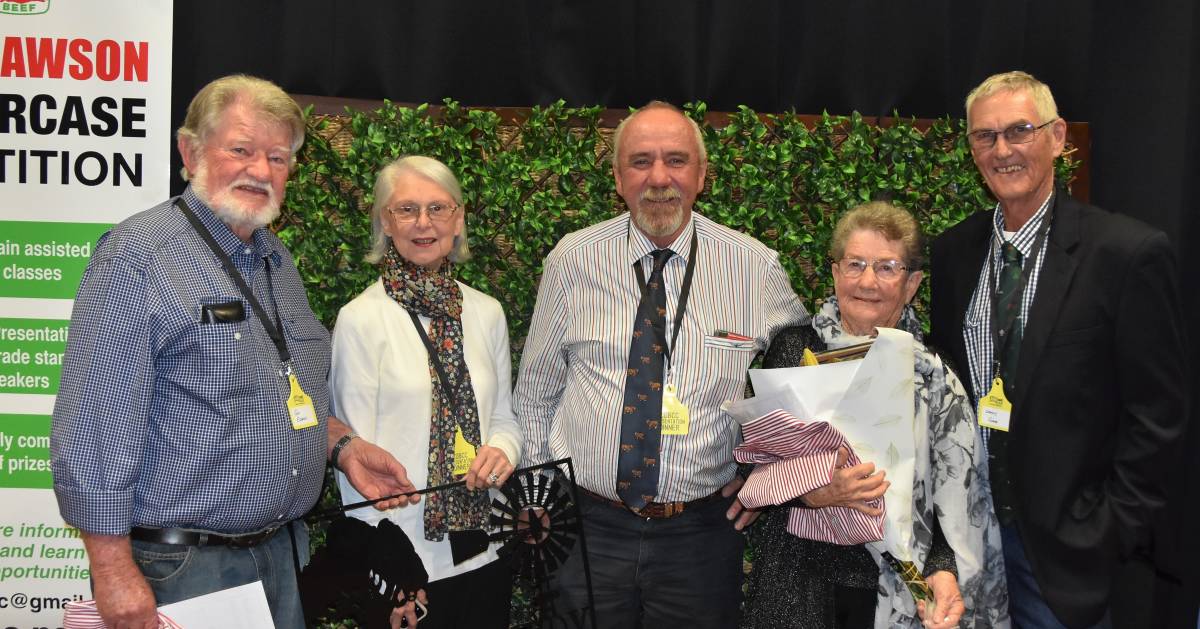 The Callide Dawson beef carcase competition has recognised Col Esdale and Girlie Goody for their years of dedicated service.

Col Esdale, Farnborough, and Girlie Goody, Malakoff, Monto, were both recognized for their dedication to the CDBCC at a presentation dinner at Biloela on Friday July 9.

This is the first time that the committee has bestowed an honour to an individual, whose outstanding service and contribution has provided a measurable benefit to the competition over last 32 years.

In his address to the awards dinner attendees, CDBCC president Beau Surawski said the pair both deserved their recognition.

"Col Esdale up until this year, was involved in the data collation and making a booklet and slideshows of presentation dinner and this is his first year, so 32 years consecutively," Mr Surawski said.

"Girlie Goody was originally an exhibitor but was conned into helping collect data.

"She then did 25 years consecutively as treasurer and only in last few years she stepped away from that, but she is still highly involved in the competition."

A self-proclaimed carcase junkie, Girlie first entered cattle into the competition in 1988, before assisting with data collection in 1989.

Ms Goody said it was an honour to receive the recognition.

"In 1993, I became the treasurer for 25 years and along the track I became a cattle coordinator in the early 2000," Ms Goody said.

"Back in the 1950s, my father was very involved in showing cattle and carcasses and I carried on from that, and I just love my cattle and sorting out the ones to go into the competition.

"I'm currently in the process of writing a history book of the Callide Dawson beef carcase competition, which will cover the results and photographs over the years."

Ms Goody paid tribute to her family and friends and she said it was the phenomenal support she received that kept her going.

"I've met some wonderful people and some very good friends over the years, and I've also received a lot of support from my family," she said.

"I think it's fair to say that Col and I are leaving the competition in very good hands."

Col's passion for the beef carcase competition first began when he was working as a senior extension officer for the Department of Primary Industries (DPI).

Mr Esdale said it was an honour to be one of the first recipients of the life membership award.

"For many years, Girlie, Judy and I spent countless hours and even days, going through figures and results of around 600-700 head of cattle.

"My role was mainly processing the results, and I had a program on the computer which would generate and accumulate the carcase results.

"It was a great experience and we got to know most of the producers better than we had before."