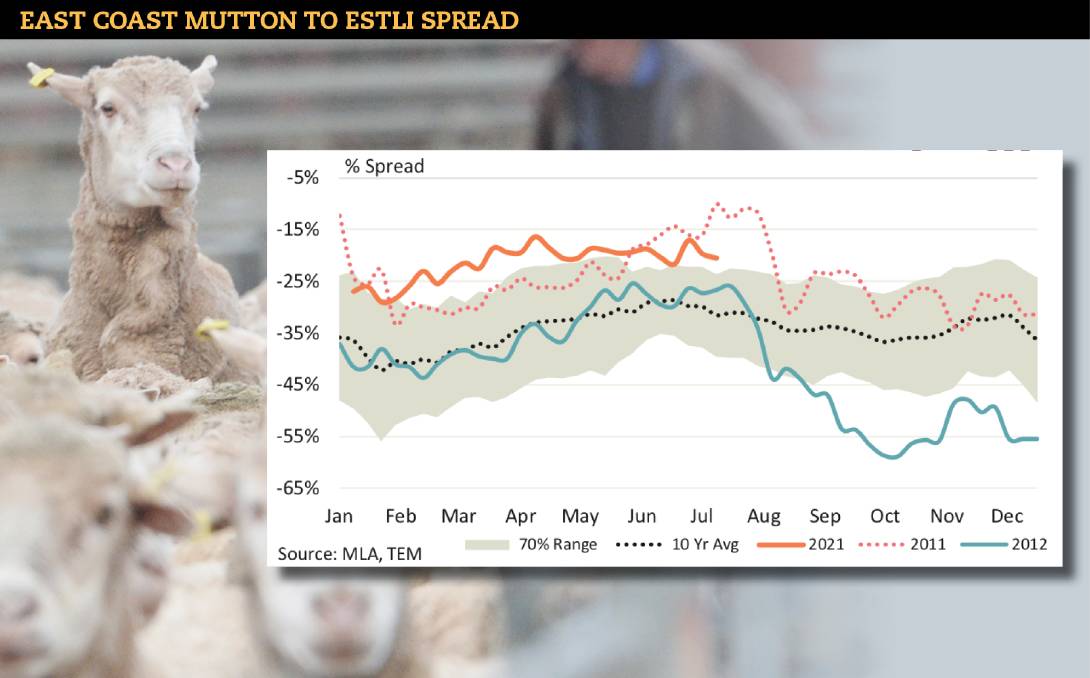 Prices for mutton are red hot as producers' insatiable appetite to restock continues and saleyard demand picks up.

Prices for mutton are red hot as producers' insatiable appetite to restock continues and saleyard demand picks up.

The national mutton Indicator is moving closer to record territory of 729 cents per kilogram which peaked back in March 2020.

Last week it gained three cents to finish at 695c/kg and on Monday it was sitting at 697c/kg.

According to industry specialists the continuing better season and sheep producers' hard rally to restock has a lot to do with the price increase.

But over the last 18 months, mutton has held its own, and as Thomas Elder Markets analyst Matt Dalgleish said, the market has seen elevated premiums to what is normal for most of 2020 and 2021.

"The percentage price spread between the east coast mutton indicator and the eastern states trade lamb indicator (ESTLI) highlights the good season that has been in place for mutton since the start of 2020," Mr Dalgleish said.

"It's similar to levels we saw in 2010 to 2011, which was the last time the industry was in a significant flock rebuild encouraged by a wetter season."

He said the spread between mutton to the ESTLI has been running above the normal range throughout 2020, fluctuating between a discount of 15 per cent and 30pc over the season and mirroring the spread levels seen during 2010.

"The spread pattern during 2010/2011 has trended at remarkably similar levels to what we are seeing during the flock rebuild phase that is underway in 2020/2021," Mr Dalgleish said.

"It is an indicative sign of how the tightness in mutton supply is to be able to keep that discount to lamb lower than normal, but also the strong restocking intent by producers.

"This shows, because of the demand for sheep that are classified as mutton, if they still have a little bit of ability to produce, then they are still being sought after.

"Even those ones that normally wouldn't fetch as much, they are holding their value."

Mr Dalgleish said he doesn't believe current prices will draw out many extra surplus sheep to the saleyards, and if they do, it won't be enough to back the price off.

"I don't think there is enough mutton out there to flood the market," he said.

"And I also don't think it is going to back off until we either have a couple of seasons worth of rebuild behind us and flock numbers growing.

"Until that, it is unlikely to see the current mutton to ESTLI spread widen too much this season."

However, Mr Dalgleish said going into 2022 the industry may begin to see it normalise toward the long-term pattern.