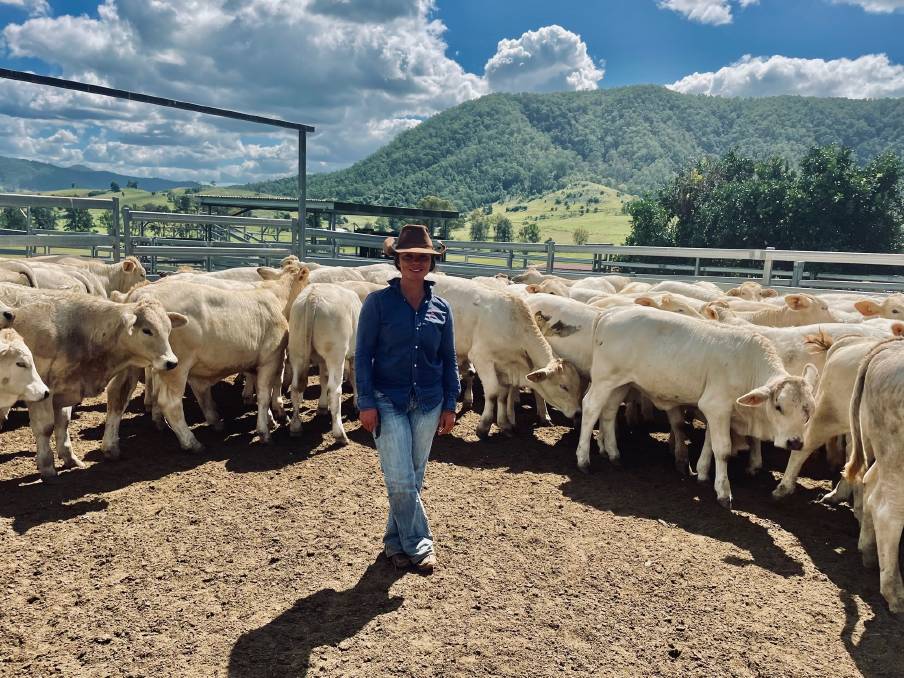 Selling well: Maree Duncombe with a selection of her first-cross Charbray heifers and steers that were sold through AuctionsPlus in April this year for $1600 per head.

In 2012 Maree Duncombe realised her childhood dreams of producing Charbray cattle in her commercial breeding operation, an ambition choice which has since yielded impressive results.

In 2012 Maree Duncombe realised her childhood dreams of producing Charbray cattle in her commercial breeding operation, an ambition choice which has since yielded impressive results.

Ms Duncombe runs her 300 head breeding herd on 930ha at Conondale Station, on the Mary River at Conondale in the Sunshine Coast Hinterland. Her father bought the land between 1978 and 1995, and when he passed away 13 years ago, she inherited the farm.

When she attended sales as a young girl with her father, Ms Duncombe was always drawn to a pen of Charbrays but they always made too much money for her father to buy.

"I always thought to myself 'imagine being the vendor of those gorgeous Charbrays, it must be a wonderful feeling topping the sale'," she said.

In 2010, Ms Duncombe searched all over Queensland and found a line of young purebred grey Brahman heifers in Tully that formed her base herd.

"I then attended various Charolais bull sales to purchase bulls but I was never 100 per cent happy with my herd until I discovered Ascot. Since using the Ascot Charolais over my Brahmans I've achieved results that I never thought would be possible."

She met the Wedge's in 2015 though her bull buying agent, Midge Thompson.

"They've since become lifetime friends. They're a pleasure to deal with and are so helpful, encouraging and full of support if I ever have any questions or concerns. They're a huge inspiration for me and I'll be forever grateful to them as I wouldn't of achieved the results that I have without them."

In her opinion the first-cross Charbray is the "ultimate cross".

"It's consistently the 'flavour of the month' through AuctionsPlus or at the saleyards. My steers and heifers sell extremely well for the domestic or export market or as future breeders.

"I'm very strict with fertility and temperament in both bulls and females. I normally get 80 to 85pc of my females back in calf each year. I feel this rate is high because I don't believe in overstocking at any time of the year here."

Progeny are sold as weaners at 220 to 320kg and six to eight months-old.

"To be able to sell something so young and achieve a result like that in such a short time, I don't see why I would ever keep them longer."

"I want them so quiet that I don't have to 'watch my back' when working on my own but then I still expect them to get out and do the job when its joining time. I also want low maintenance bulls that look after themselves."

It was seven years ago that her search for the 'right' Charolais bull led her to Jim and Jackie Wedge, Ascot Cattle Company, Warwick.

"I'd shopped around and found it was very difficult to find good temperament bulls that I knew would be safe for me to work with on my own, but I've never have any problems with the Ascot bulls or their progeny."

She buys a bull from Ascot each year, as she knows they'll still be quiet when she gets them to Conondale.

"I have eight Ascot bulls, including the first one I purchased in 2015. I never have to spend money on them with vets or special feed, and they've always passed their yearly semen tests.

She loves that Ascot offer a large number of homozygous bulls every year.

"I may of paid a bit extra to get the homozygous polled genetics but when it's branding time it's a nice relief for both the calf and myself as I don't need to dehorn, it's made my job easier and puts less stress on the animals.

"My buyers have told me they're very happy on their end and they continue to buy my weaners annually. I find my cattle appeal to all kinds of buyers as they're naturally quiet and settled at the sale."

Her highlight so far this year was selling steers and heifers straight off their mothers through AuctionsPlus for $1600 per head.

"I also sold the tail end of my weaners through Shepherdson and Boyd at Toogoolawah recently. I weighed the weaners the morning they left on the truck to average 232kg curfew weight. They reached $1580 at the sale the following day."

Prior to this year she'd won Champion Pen of Female Weaners (three years in a row) as well as Grand Champion Pen titles with steers and heifers at Sullivan Livestocks' weaners sale's at Gympie and Woolooga.

"I also produced the Grand Champion exhibit at the Gympie Prime Show in 2017."

She said its a wonderful feeling to have her herd exactly how she wants it.

"My aim 13 years ago was to produce gorgeous Charbrays that would make top dollar when selling. It sure is a wonderful feeling to have accomplished this dream."