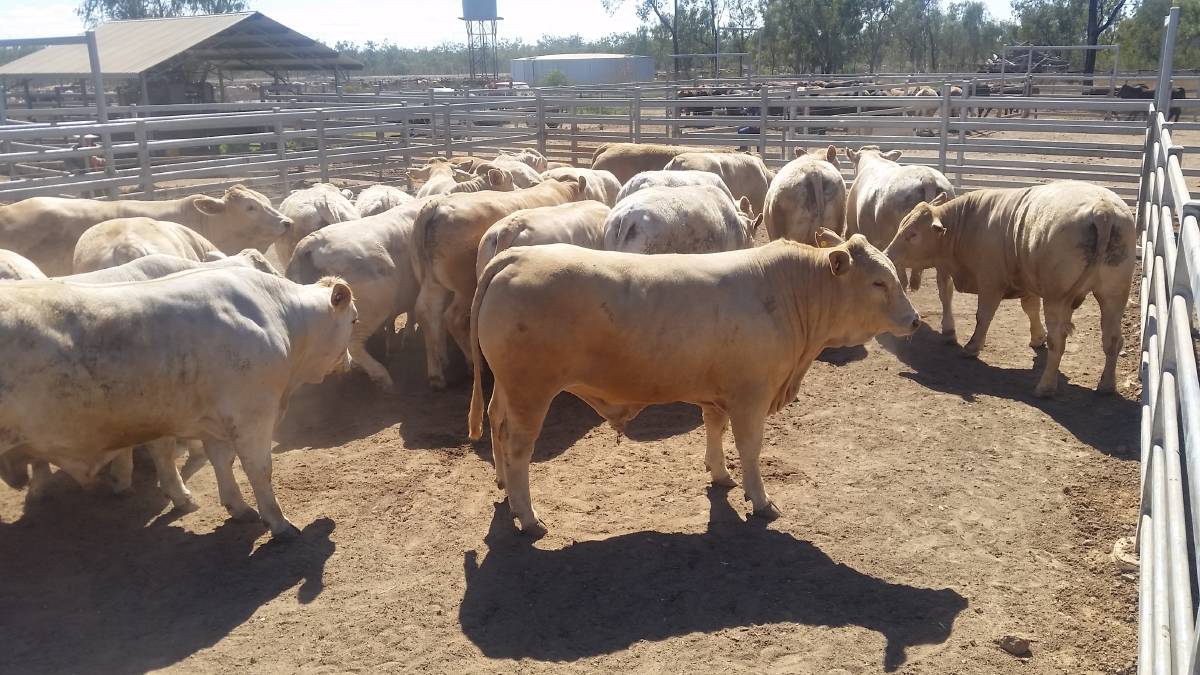 Fairview Cattle Company's Warren Gleeson said the weight for age gains and structure Charolais genetics add to the cross progeny they produce allow them to hit their targets for entry into the feedlot market.

It was in 1992, while taking in the sights at the Ag-Grow Emerald Field Days that the Gleeson family first took notice of Charolais stud bulls, which were being exhibited there; since that moment the breed has become integral to their Alpha-based commercial crossbreeding program.

Operating as Fairview Cattle Company, Warren and Katrina Gleeson run the business, with Warren's mother Kathleen (her husband, Peter, sadly passed away a year ago, on July 29) from Fairview, 5km east of Alpha, purchased in 1961. The family bought nearby Sapling Creek and Elphin, which adjoins Fairview, in 1971 and 2009 respectively.

Between 2200 to 2400 mated Brahman-cross cows are run across the three properties, which predominantly comprise standing forest country, which has been bulldozered, blade ploughed, and improved with buffel, Seca stylo and small-scale cropping. A combined 55 paddocks, nine holding paddocks and six sets of yards (two per block) have been incorporated into their overall holdings.

"That rain gave us a reprieve and got our country looking right again. We've been lucky enough to have consistent rain since Christmas Eve. From then through June we've had close to 600mm, which has kept up through Winter," he said.

At the time of their visit to Ag-Grow the family were running a Hereford-base breeding herd to which they'd introduced Brahman and Santa Gertrudis bulls.

He said the weight for age gains and structure the Charolais genetics add to the cross progeny are of great benefit, allowing them to hit their targets for entry into the feedlot market.

"We have good, safe country here, but we're still governed by the heavens above and the Charolais bulls have stood up against all the other breeds we've used in even the harshest conditions."

They leave the bulls in the paddock with the breeding herd year-round and are strict on culling for fertility and temperament.

"We look for conformation in the heifers off their mothers. They need to be sound and soft with femininity. Plainer heifers are spayed. The breeding cows have access to NT uraphos (30 per cent urea) block lick year-round, we also feed them cottonseed and M8U if the season goes pear-shaped. Through this we're able to keep our conception rate above 80pc."

The Gleeson send all their crossbred progeny to the feedlot market. Steers are sent at 450kg or more, older, larger heifers that have preg-tested empty at 440kg, and spayed heifers at 380kg.

"In 2017 and 2018 we custom fed most of our cattle at Smithfield Cattle Co, Proston, where we got good conversion rate results. Steers mainly go to Morgan Past Co's Whaka feedlot near Quinalow. We may sell our next lot via AuctionsPlus."

Mr Gleeson said the type of Charolais bull they look to purchase doesn't need to be the biggest or boldest.

"We like them built like a tissue box, with softness, moderate to good bone, and with a really relaxed and kind look to them. We don't like them overly pumped up for the sale, as they need to be able to get out and walk when we bring them home. The squarer bulls are the right article for us to get the right shape at 100 days when they hit the grid."

To meet these requirements the family has been buying bulls from Ian Bebbington, Mountview Charolais for the past 10 years.

"We don't travel to a lot of sales so Blake Munro from Elders buys a lot of bulls on our behalf. The first one from Mountview he bought for us, a very nice bull calf, was from the February All Breeds Bull and Female Sale in Rockhampton. We've since gone on to buy many more bulls from them as well as females.

The family also run a small stud program, with the homebred bulls they produce used in their commercial program.

For years, the Gleesons have exhibited their cattle at the Alpha Show.

"We sometimes get a win in the store cattle section. Our cattle hold their own. We would like to get into feedlot trials down the road as well."