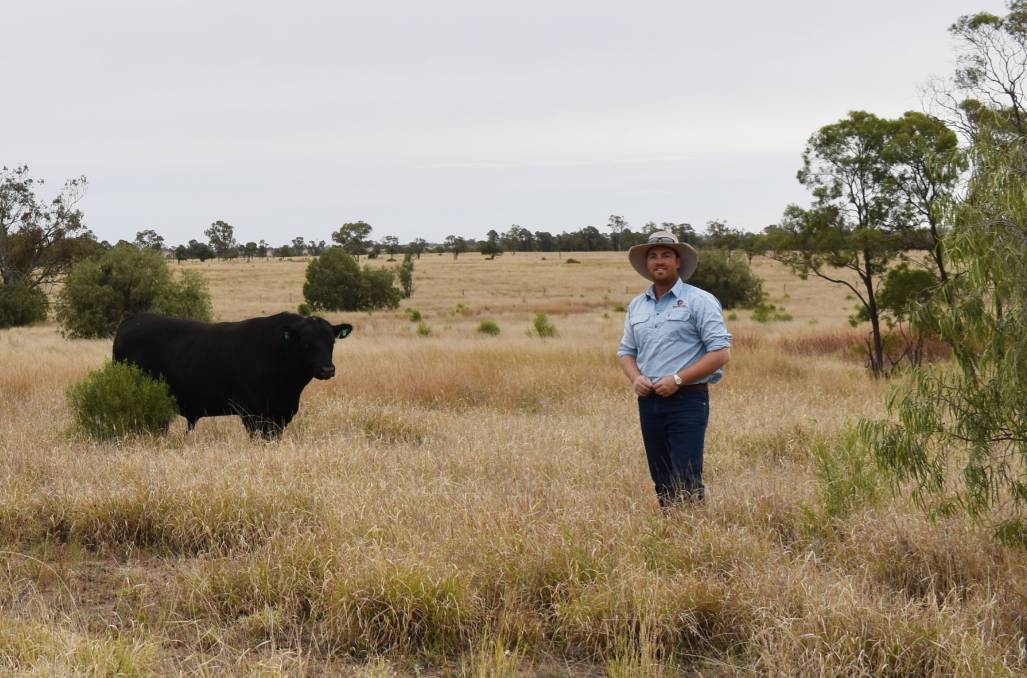 Opening avenues: Barclay Bassett said the family's decision to form a pure Angus herd was backed by their confidence in the breeds' popularity across a broad spectrum of markets.

In 2019, a lack of sufficient cattle availability for their trading operation led the Bassett family to forming a pure Angus breeding program to help bolster their bottom line.

In 2019, a lack of sufficient cattle availability for their trading operation led the Bassett family to forming a pure Angus breeding program to help bolster their bottom line.

Their holdings also include Glenellen, north of Morven, which was bought in 2002.

Jenavale comprises undulating scrub country, which has been developed, blade ploughed, and put down to buffel, while Gleneden is half Downs and mitchell grass, while the balance consists of gidgee and brigalow put down to buffel, and Glenellen is predominantly pebbly brigalow country.

While the Bassetts' backgrounding operation still forms the backbone of their business, the drought and subsequent lower Australian female herd got the family thinking about other enterprise opportunities.

"After good winter rain in 2019 at Gleneden, we purchased 84 yearling heifers from the Halliday family, Ben Nevis Angus.

"We then began searching for the best of the best Angus bulls available, which led us to purchasing Chisum bloodlines from Ross and Dimity Thompson's Millah Murrah Angus stud."

He said their choice to run with Angus, was backed by their confidence in the breed's popularity across a broad spectrum of markets.

We went through all the breeds and Angus stood out to us in relation to conception rates in our region. - Barclay Bassett, Bassett Cattle Co

"Angus Australia has done a lot of research on the breed and has invested a lot of money into clearly defining what the article actually is, and the benefits it can provide.

"Fertility was another key point for us. We went through all the breeds and Angus stood out to us in relation to conception rates in our region.

"The breed's growth rate and early maturation are also big pluses for us in moving forward with the program as it allows us to join yearling bulls."

In addition to the Ben Nevis heifers, earlier this year the Bassetts bought 76 PTIC in calf to Millah Murrah Paratrooper (via AI), bringing their total Angus breeding herd to 160 head.

Mr Bassett said they join their bulls with the females for 12 weeks from October 1.

"Anything not in calf is culled. Our second-calf Angus heifers had a tough 2020 with low rainfall at Augathella.

"Despite having everything against them, we still achieved a 100pc conception rate. They performed brilliantly which, for us, highlights how fertile the breed is.

"We thought the breed might not be able to handle the heat and dry, coming from the south, but they certainly proved us wrong. I think this resilience comes from the Millah Murrah bloodlines.

"Ross doesn't pull any punches in ensuring he's breeding the type of article that will perform anywhere."

He said they'll be keeping all heifer calves to grow the Angus herd until they have about 400 breeders.

"We're very much in a growth phase at present. Steer progeny from these females will be turned off as trade steers and marketed with Angus bloodlines."

The Bassetts received their first-drop calves between July and September last year.

"We weaned in March and despite a tough start for the calves, they all performed really well. Our steers are averaged 320kg, and the heifers, 280kg. Looking ahead: In the future, the Bassetts plan to put steers and cull heifers by their Millah Murrah Angus bulls into performance trials.

He said Ross Thompson matched them up with the right bulls to go with their Ben Nevis heifers.

"Border closures meant we couldn't get to the Millah Murrah sale in 2020 so we bought bulls, for the first time, sight unseen. It was daunting, but we have a lot of confidence in Ross and the shortlist he selected to suit us. He certainly stands by his cattle.

"While we're very used to breeding herds all over Queensland, this is our first time with a pure Angus herd. It's been great to work with Ross and create a new herd with exactly our preferred traits.

"Ross goes far beyond sale day - we have had lots of follow-up conversations with him. They're both genuinely interested in seeing how we're travelling."

Looking ahead, the Bassetts plan to put steers and cull heifers into performance trials.

"Weight gain and production will be our focus. We have a lot of data on our trade cattle, which will be helpful for benchmarking our Angus herd."