Home on Havelock: Susan and Bim Struss on Havelock, where they're getting good results from joining a portion of their yearling-mated heifers with low birth weight Angus bulls.

The Struss family's decision to join yearling heifers with Angus bulls has proven to be fruitful.

Poll Herefords have been the mainstay of the Struss family's operations on Havelock, 50 kilometres north of Mitchell in Queensland, for more than 70 years.

But their decision seven years ago to join a portion of their yearling-mated heifers with low birth weight Angus bulls has proven to be fruitful.

The land on Havelock spans from Maranoa River flats out to better Brigalow/Belah country that has been well developed, while Yellowcap is a special piece of developed finishing country that butts against the Great Dividing Range.

Mr Struss said they introduced Angus bulls to address the concerns they were having with pregnancies in their yearling-mated heifers.

"We were impressed with the cross and started to retain some of the best of the first-cross heifers for breeders," he said.

"Our first-crosses have performed well. We cull our cows at eight years when they've reared six calves. So, 2021 is the first year where we'll have some of the first first-cross cows to cull.

"We weigh the purebred and first-cross progeny as weaners and then at marketing and, while I suspect it's hybrid vigour, the blacks often outweigh the Herefords."

"The bulls go out with the breeders as close as possible to November 20. We're very strict with our maiden heifers.

"They're mated for 63 days or three cycles. The low birth weight Angus bulls come out of the maiden heifers on January 22 each year.

"Eight weeks after the bulls come out, we pregnancy test the maiden heifers through our local Roma vet clinic technicians. They are foetal-aged, and any empty heifers are spayed and fattened for slaughter.

"We could narrow this joining period to two cycles, or 42 days, because 90 per cent of our heifers conceive in the first couple of cycles. 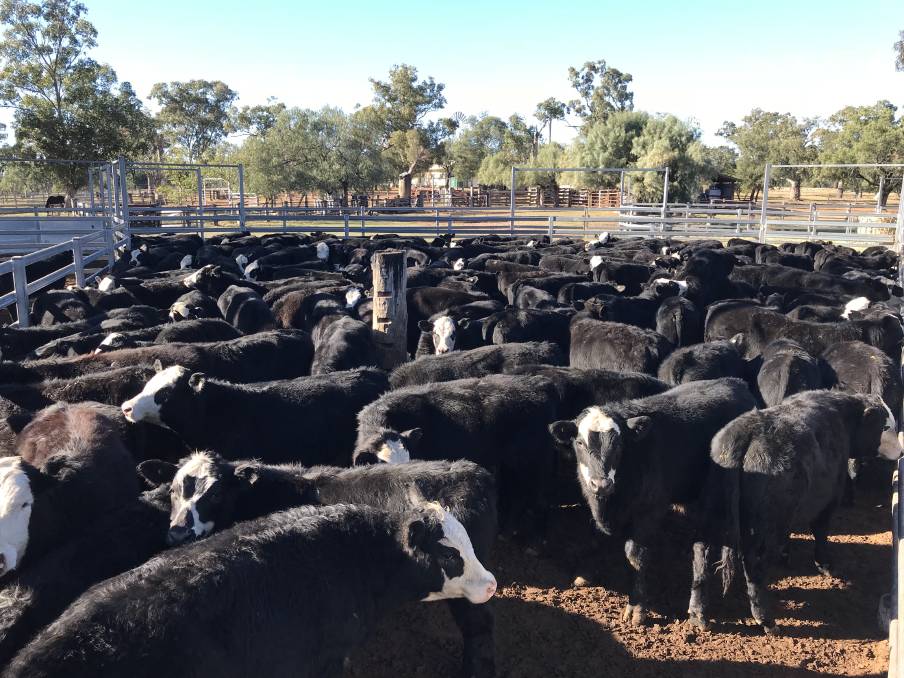 First-cross steers: The Strusses have been growing out their first-cross Angus-Hereford steers to 450kg to 500kg on average at Yellowcap, 18km south of Havelock, since purchasing the property in 2018.

"The fertility rate in our maiden heifers generally sits in the low- to mid-90pc range. If you continually retain only those heifers that conceive early, year-on-year, herd fertility can only improve.

"We like to pull the bulls out of the main breeder herd in early March to ensure all calves are on the ground by early December.

"This makes for a more relaxed Christmas. Like the maiden heifers, they're all pregnancy-tested at weaning by our Roma vet technicians. Any empties are sent to slaughter as soon as they have some grease on them."

The Strusses don't differentiate between their purebred heifers and Angus-Hereford first-cross heifers.

"When we draft to select our heifers to retain for breeders, each heifer comes into the draft and is selected on type, growth, conformation, femininity, temperament and a series of other traits such as stance, hoof structure, eye setting or a hooded eye," Mr Struss said.

"It's quite a long day. Susan does all the drafting and calls it. I'm on the pound gate and get questioned for my thoughts ... like any good husband I agree 99pc of the time.

"You need to be sure of yourself to open the cull gate if the heifer has been called as a keeper.

"As our Poll Herefords have been our prominent breed for 70-plus years, these make up about 70pc of the breeder herd. But the first-cross numbers are building each year."

The Strusses' solely focus on breeding quality cattle for the grass-fed market.

"One benefit of this pandemic is people have gone back to the basics and want to feed their families the best natural protein and due to this rationale grass-fed meat has been a winner," Mr Struss said.

Since buying Yellowcap, they've been growing out our steers to average weights of 450 to 500kg.

"Like all herds, there will be a tail end that we'll hold over," Mr Struss said.

"But, equally, there will be the lead that will be too heavy for the feedlots.

"Although we are still getting used to managing the marketing from Yellowcap, it's our aim to sell in February and March when the steers will be 16 to 17 months old. Last year we sold earlier because it was very dry, and we wanted to retain the feed for the next drop of steers to be weaned in June-July. This year we sold earlier because of the extraordinary market. The steers went to the NAPCo Wainui feedlot near Bowenville."

The family previously sold steers as weaners after they were properly weaned and handled. So, their regular buyer could take delivery and let them straight out into his Buffel paddocks.

"It's our eventual aim to market finished steers and heifers direct to the abattoirs," Mr Struss said.

"At times like this when feedlot weights are in short supply, it may be more economical to market to the feedlots. Susan and I devote a lot of time and care into our cattle, so animal welfare rates above anything else for us.

"We like the thought that our cattle experience a great life with us and only have one or two bad days when they go to slaughter. I'm not suggesting that the feedlots don't look after cattle with the best animal welfare practices in place, it's more an anthropomorphistic thing for us, where we like to see our cattle grazing improved pastures and sitting under a tree chewing their cud."

Eight years ago, the Strusses were lucky enough to encounter Tim Emery, when he worked as an extension officer for the Department of Agriculture and Fisheries in Roma (he's now on secondment to Tropical Beef Technology Services).

"With his guidance, we identified studs that had all the traits we wanted in our bulls. Under the northern self-replacing index in Breedplan we searched for homozygous poll bulls that exhibited high scrotal measurements, low days to calving, low birth weight or high calving ease, an better than average growth.

"When we identified these bulls, we then went back into the parentage of the bulls selected to check the performance of the sires and dam. This way we've virtually purchased our bulls prior to going to the sale.

"All we need to do then is check the traits that are subjective when we get to the sale, including temperament, structural correctness or conformation, legs and hooves, if they're free moving and mobile, their eyes, ensuring the bull is masculine but soft with plenty of skin - and to make sure we like the look of the bull."

The two studs that stood out to them in their region were Sandon Glenoch and Burenda.

"We've been buying Angus bulls from these studs for some time now," Mr Struss said.

"The Boshammers know what we want in our bulls, and we have the confidence in them to share what we have selected prior to the sale and provide advice."