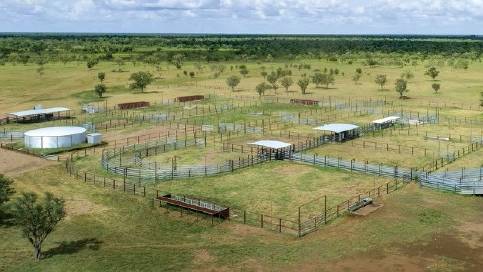 Large-scale pastoralists Peter and Jane Hughes are understood to have paid a record price in the vicinity of $180 million for the 438,000 hectare (1.08m acre) Normanton property Miranda Downs.

The Menegazzo family's Stanbroke Pastoral Co offered Miranda Downs for sale on a walk-in, walk-out basis including 55,000 Brahman-cross cattle, through an expressions of interest process which closed on June 3.

Miranda is recognised as a particularly productive northern property. It has a rated carry capacity of 66,000 adult equivalents.

There is an exceptionally good balance of country, comprising of a large portion of coolibah floodplain/river frontage country associated with the Gilbert and Maxwell rivers.

The balance of the property runs back to sandy forest country.

New fencing has been erected on Miranda in the past four years, including major laneway systems.

The 45 main paddocks enable more intensive herd management, with ten sets of cattle yards and extensive laneways scattered and can be mustered in seven weeks.

"During the past 10 years, Miranda Downs has particularly seen a significant development of water, fences and yards," Mr Douglas said.

"This has enabled more intensive management of the herd and increased productivity through reduced mustering times, increased weaning rates and higher turnoff weights.

"Miranda is quality northern country with a reliable rainfall.

"The new owners will have the opportunity to further increase productivity."

Peter and Jane Hughes and family are no strangers to the beef industry and already have extensive Hughes Pastoral Co and Georgina Pastoral Co Wagyu and certified organic beef herds strategically placed across the Barkly region, central and south western Queensland.