Spencer Ranch head farmer Will Thompson is looking down the barrel of an announced water allocation between 14 and 17 per cent from July 1.

Significant rainfall has avoided the region with fears the region's major water source, Paradise Dam, could run out of water following the state government's decision to lower its wall by 50 per cent.

With Sunwater expected to release it's official 2021-22 announced allocations within the next month, it is predicted that medium priority users on the Bundaberg (Burnett sub-scheme) water supply scheme will be hit with allocations between 14 and 17pc.

Before the remediation of the Paradise Dam wall, farmers had averages of 80pc or more water allocations from the scheme.

Wide Bay-Burnett citrus enterprise Spencer Ranch has more than 62,500 citrus trees in the ground across 156 hectares in Wallaville, 43km south west of Bundaberg.

Head farmer Will Thompson said growers in the region are frustrated with the news that their cropping and horticulture businesses are facing "historically low" AA from July.

"Our farm is going to go from 100pc allocation, which was too late to do anything with my last growing season, to on the first of July, to go to potentially between 14 and 17pc allocation," Mr Thompson said.

"This will be the first time in 11 years that we're actually going to have less than a 70pc starting allocation.

"If I didn't have any plans in place to secure an alternative water supply, the AA would mean I could keep my trees alive, but I'd be rendering all my staff unemployed and I would be pruning all my trees back heavily and preventing them from yielding a crop."

The Ranch employs 45 locals across the Bundaberg region and Mr Thompson said the business has adapted to low water allocations and dry conditions by constructing on-farm water storages in 2020.

"We started work on dams and bores last November and if we hadn't done that I would be laying off my workers and I wouldn't be growing a crop," he said.

Mr Thompson understands there's nothing Sunwater can do to increase the inflows into the Paradise dam, but he said the rules should be changed to prevent sudden allocation reductions of 80pc.

"That's absolutely ludicrous, and the rules need to be looked and changed, because that's never been allowed to happen," he said. 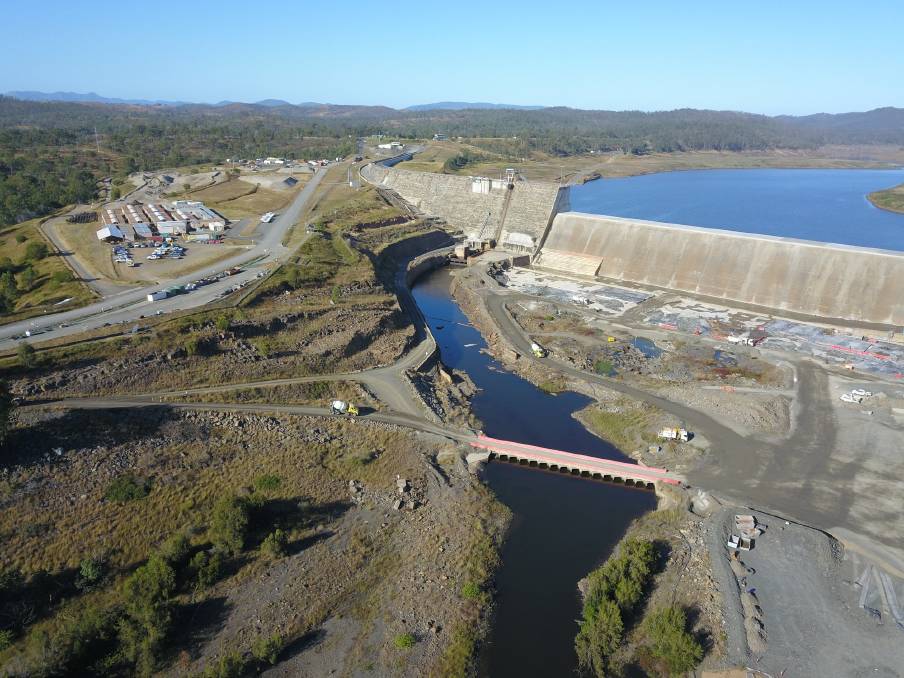 Allocations can increase if inflows occur

A Sunwater spokesperson said the company is doing all it can to ensure there is as much water available as possible for irrigators and the community.

"We are hoping for further rainfall in the coming months, particularly within catchments still experiencing dry conditions," the spokesperson said.

"Announced allocations are set at the start of the water year and cannot decrease as dam capacity levels reduce.

"However, should inflows occur allocations can increase to a maximum of 100 per cent, as they did during the 2020-21 water year.

"Medium priority allocations for the Kolan sub-scheme (Fred Haigh Dam) are forecast to be between 93 and 96 per cent."

In 2020, former Natural Resources Minister Dr Anthony Lynham approved an amendment to water-sharing rules that enabled Sunwater to maximise allocations in the Burnett sub-scheme for the duration of works at Paradise Dam.

The announced allocation (AA) predictions for growers on the Burnett sub-scheme has prompted speculation that the loss claim for the Paradise Dam class action will be more significant than originally expected.

Mr Marland said the AA is going to considerably accelerate the anticipated losses for irrigators in the region.

"There are going to be very significant income losses in the coming financial year because, for many growers in the Bundaberg region, an AA of 14 - 17% is almost unworkable" Mr Marland said.

The Queensland government is expected to make a decision about the long-term future of Paradise Dam by the end of 2021.