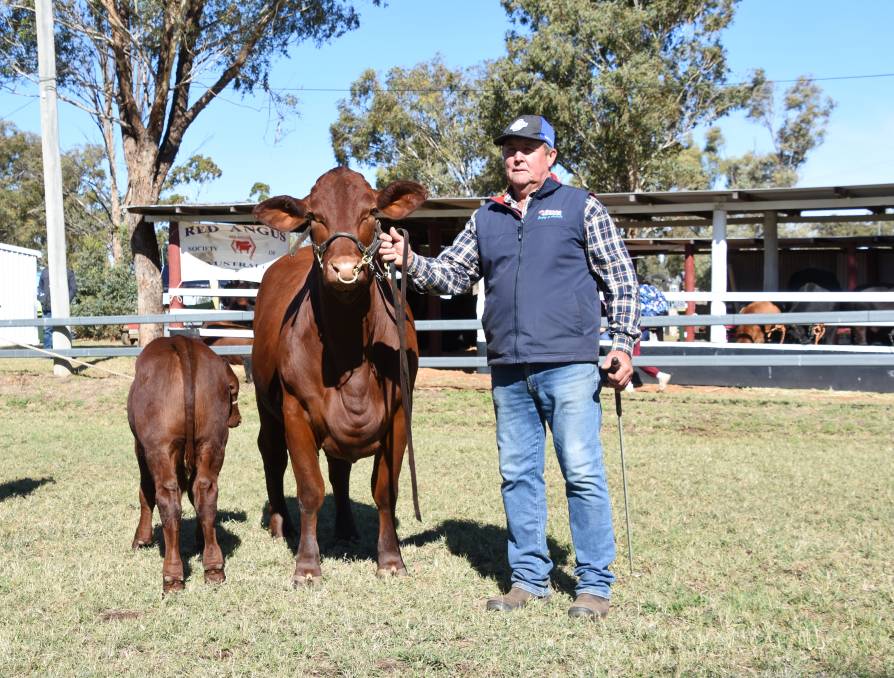 Over two days of competition, 79 exhibits were paraded.

After being runner-up in the 2019 Fantastic Females competition, Rosehill Santa Gertrudis stud returned to FarmFest this year to claim top honours.

Judge Julie Pocock-Iseppi said all three females were a picture of femininity and refinement.

"The Santa is a broody cow with a lot of length of body, beautiful shoulders on this cow and that stretch up through the front end," she said.

"A beautiful navel on her, she's super clean there and that immaculate udder.

"As an example of her breed, there's not a lot you'd change about her and to see a tropical cow with an udder like this is impressive.

"She's faultless and doing a cracking job on her calf."

Sired by Rosehill Jameson 4 and from Dangarfield Valerie 2077, Q85 was exhibited with a three-month-old bull calf at foot.

Mr McCarthy said it was great to get the win.

"This cow won supreme Santa Gertrudis at Toowoomba Royal Show and got reserve senior at Beef, so she's had a good run," he said.

"She's a lovely feminine cow, beautiful udder with a lot of milk, and structurally really good.

"This cow's sister won it (Fantastic Females) three years ago, and we won supreme exhibit two years ago [with Rosehill Norman 31], so it's good to be back."

The fantastic female then lined up against Tuesday's Battle of the Bulls grand champion K5X Quality Q53, but couldn't outshine Stephen Hayward and Kellie Smith's Angus bull for the 2021 supreme exhibit title.

Mr Hayward said they were thrilled to claim the supreme honours with the quality young sire prospect, at the conclusion of the two days which saw 79 exhibits through the arena.

Claiming a host of ribbons throughout the two days of competition, Provenance Limousins were named most successful exhibitors.