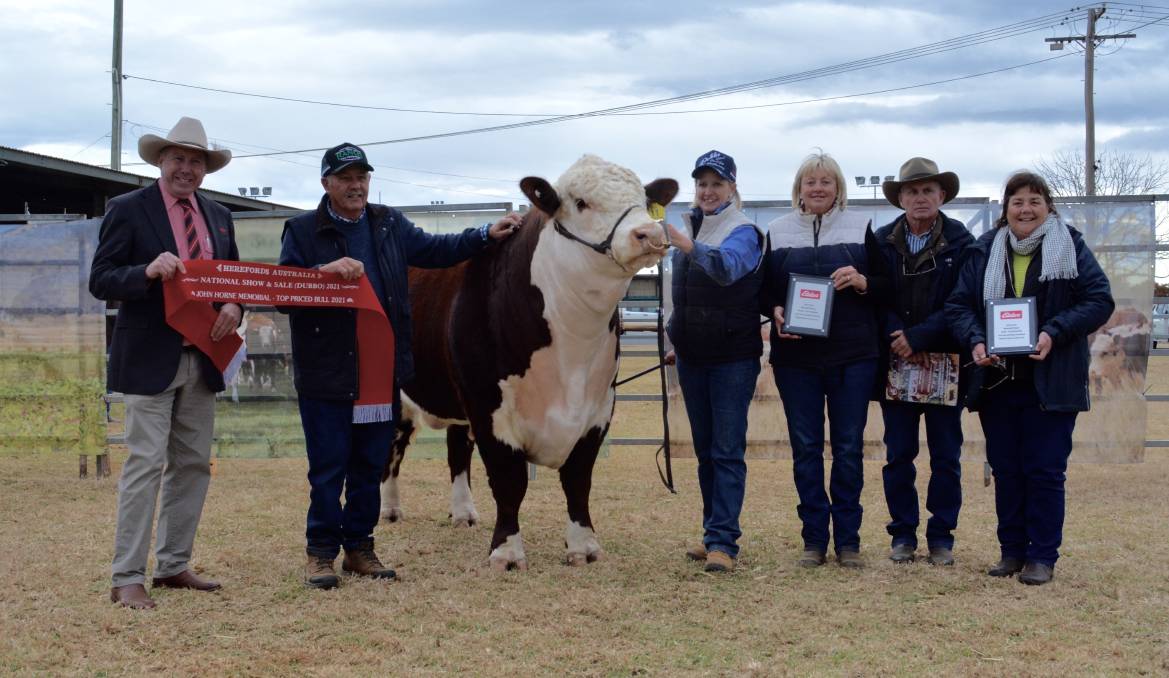 All the sale results from the 60th annual Dubbo Hereford National today.

The Ranch Qualifier Q033 demanded interest from a number of buyers, eventually being knocked down to the Crowley family of Tycolah Poll Hereford stud, Cobbadah for the sale top price of $27,000.

Offered by Greg and Del Rees of The Ranch Poll Herefords, Tomingley the 21-month-old was by The Ranch Tipperary M005 and out of Grassy Mountain Noble Girl 411 who also was the dam The Ranch Payroll P031 that sold for $19,000 to Mountain Valley Poll Herefords, Coolatai last year.

He tipped the scales at 890 kilograms with rump and rib fats of 24 millimetres and 17mm, an eye muscle area (EMA) of 128 square centimetres and a scrotal circumference of 45cm.

Offered with her nine-month-old heifer calf-at-foot, Grathlyn Chance R007 sired by Elite M44, the high-selling female was a rising three-year-old daughter of New Zealand sire Koanui Techno 3062 and out of the Grathlyn Chance L040 female.

Judge of the show, Jason Catts of Futurity Shorthorns, Baradine awarded junior and grand champion bull to Armada Represent from vendors Andrew and Brooke Rayner, Armada stud, Mudgee that went on to sell for $16,000 to the Rumbel family of Supple stud, Guyra.

One embryo package containing three embryos from Llandillo Juliet G100 sired by Yalgoo Break Out G075 sold for $500 per embryo to an AuctionsPlus buyer.

Ten straws of SRF Fort Worth 118F, offered by Llandillo Poll Herefords, The Lagoon sold for $100 a straw to Tummel Herefords, Walcha.

The sale was conducted by Nutrien Dubbo and Elders Dubbo with Joel Flemming on behalf of Nutrien and Paul Dooley on behalf of Elders as the auctioneers.