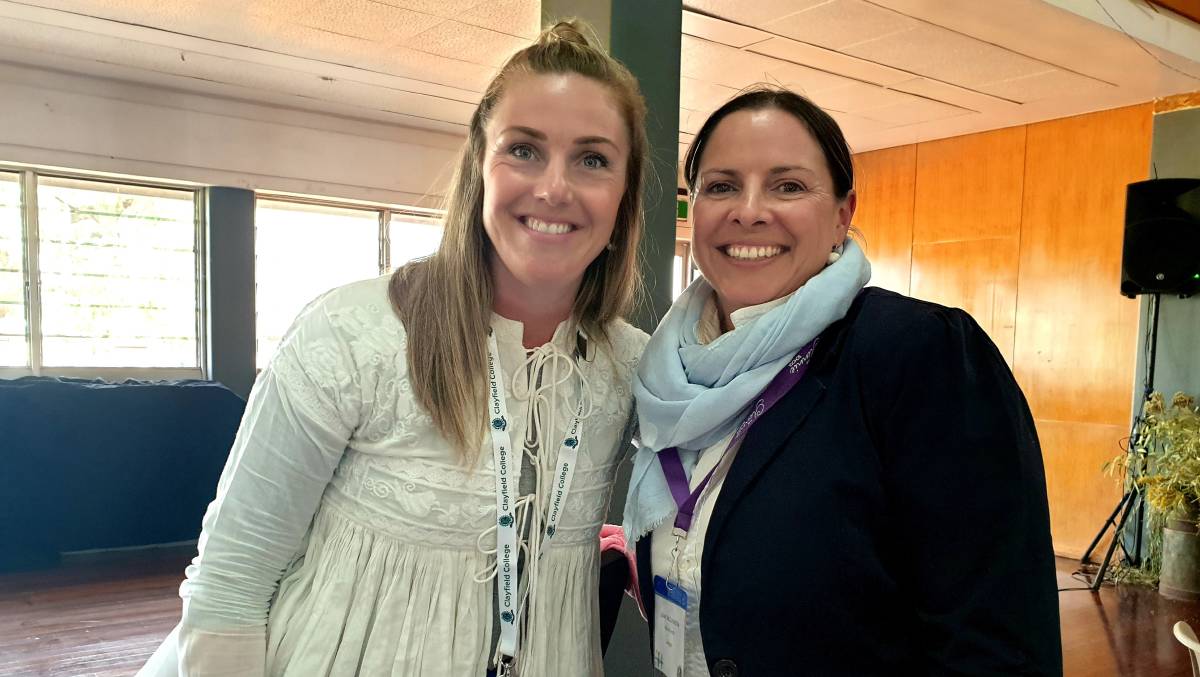 Capricornia School of Distance Education mothers and P&C executive members Liz Burnett and Juliet McConachie were among those fighting for their on-campus living quarters to be returned to the families. Picture - Sally Gall.

The P&Cs of both schools raised the money, sourced matching government funding and project managed construction, in between teaching their childen and running their businesses, because they could see what an asset a communal hub would be for school families.

Being on school grounds, the buildings were handed over to the Department of Education to manage into the future.

Now, the department has decreed them off-limits and the families that paid for them can no longer use them for dormitory-style accommodation and meals during mini-schools.

Instead they are forced to compete for accommodation for a week at motels in peak tourist season, which as well as being much more expensive, is splitting the school community up.

The cost and difficulties involved means that some families are now deciding not to attend what is one of the more valuable learning weeks on the distance education teaching calendar.

The sheer frustration of parents trying to salvage something that has been serving a useful purpose and finding themselves blocked reached a crescendo at the state Isolated Children's Parents' Association conference in Cunnamulla last week.

Motion after motion sought to find a way around the impasse that has seen the Longreach School of Distance Education 'Quarters' unable to be used for sleeping since 2016, and the Emerald facility shut more recently.

Both are now being used for classroom or teacher preparation purposes.

One motion from the Alpha branch asked for School of Distance Education P&Cs to be supplied in writing with a complete list of any fire, health, safety or COVID regulations that are preventing school families from accessing the purpose-built facilities.

"Alpha branch has provided an extensive timeline of events that demonstrate the steps that CSDE P&C has gone to in an attempt to try and resolve these issues, with no success," delegate Juliet McConachie said.

"The issue needs to be rectified immediately, the red tape departmental blockade and excuses need to stop, and discussion needs to be transparent and open with those involved, so that families can get back to using these."

The Department of Education's director of regional support, Geoff West said an audit in 2018/19 had found extremely serious breaches within a number of areas.

"Two weeks ago we met with the principals of the schools of distance education," he said.

"We are working through a process to ensure there's a checklist so a judgement can be made on site.

"Some of these breaches are so extreme they would be closed permanently if an officer walked in."

In response to a question from Clarke Creek's Lynise Conaghan on why issues identified as far back as 2018 were taking so long to rectify, Mr West said the last audit was in February 2021.

"We made the decision, until we had an understanding of the number of breaches, we were not able to define which facilities were in breach," he said.

Assistant Director-General, rural remote and international, Dr Regan Neumann added that the safety of children and staff was paramount and they were developing a checklist to make sure things were safe.

"Then it's up to the principal to decide if they want to run these sorts of activities on campus," he said.

In response to further questions, Darling Downs and South West regional director Leanne Wright said the principal was the site manager and it was the department's role to provide them with advice and clarity around safety.

"We can't put a preferred outcome on them," she said.

"School principals will go above and beyond to get the best outcomes, but some issues won't be able to be addressed.

"There are some serious conversations to be had."

As another motion asking for SDEs to enter into formal arrangements with organisations that utilise onsite camping facilities was debated, Ms Wright again stressed that the department may not arrive at the solution delegates desired.

"Principals have legislative requirements and sometimes the only answer they can have is, no," she said.

"It's not just about buildings, it's about workplace health and safety for staff, industrial legislation.

"I don't want to simplify but it's not just about fixing a door or some steps.

"In some cases, things have changed - this year things were audited that were not audited before.

"We will commit to how we can simplify so that everyone understands our reasons."

Related: ICPA needed as much now as 50 years ago

"As far as fire safety is concerned, it's a class 10A structure and falls outside QFES jurisdiction," she said.

"Qbuild told us it was a lawful building and the door furniture just had to be changed to lever action, and make it so that a step was not at the threshold.

"Surely those are issues whether it's being used for camping or for classrooms."

Yaraka-Isisford branch observer and past state president Andy Pegler said one wondered how the facilities could be repurposed as classrooms.

"The big thing here is that SDE schools don't just have students, they have families.

"They're very socially isolated and they need the opportunity to mix as a group.

"If these facilities are remiss in meeting requirements, will they be made up to scratch.

"It's not just a case of, it's too hard, make it into a classroom.

"We need these facilities - don't put it into the too hard basket."

"The thing is, compliance could have been achieved - would it not have better to come to the P&Cs rather than doing this," Ms McConachie said.